Stanton Street follows a parallel path with its partner, Rivington Street, from the Bowery east to Chrystie, Forsyth east to Pitt. There are various pieces of it leftover as walkways in the Gompers and Baruch Houses, constructed in the 1940s. Many streets in this neighborhood are named for associates of colonial-era James de Lancey, who owned most of the property here before the American Revolution. My various sources on this subject* variously describe George Stanton as James de Lancey, Jr.’s agent or a foreman on his property. 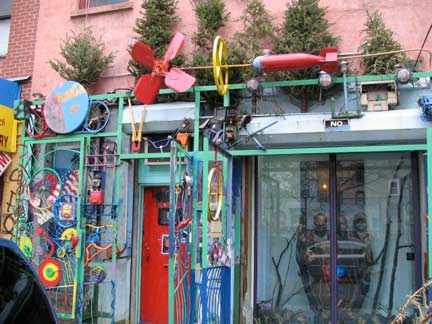 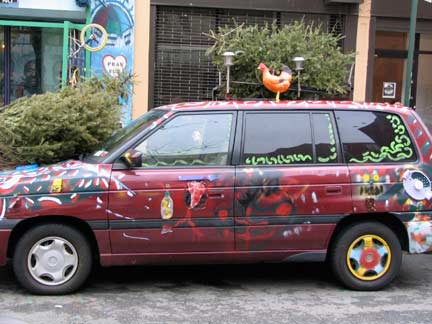 Fusion Arts Museum, #57 Stanton at Eldridge. I’m not sure, exactly, what “fusion arts” is, but the museum’s website gives it a shot:

Fusion is the art genre that best mirrors our 21 century with its constant chaos, multi-sensory bombardment, and ever-advancing technology. No other art form has captured the vicissitudes and capriciousness of life like fusion does. It is an attempt to break the conventions by refusing to be linearly creative. It is the seamless interdisciplinary integration of all artistic mediums, a merging of painting, sculpture, light, sound, video projection, photography, performance and the written word. It is art that melds or fuses the various genres into a genre of its very own. The concept behind fusion art is to explore an alternative to the common artistic process of simply following a linear sequence in creating art. It is the understanding that art is limitless and therefore a multiple of all multiples. Fusion art, by definition, is limited only by its creator. It is art that needs to be revisited over and over again because one visit is never quite enough. 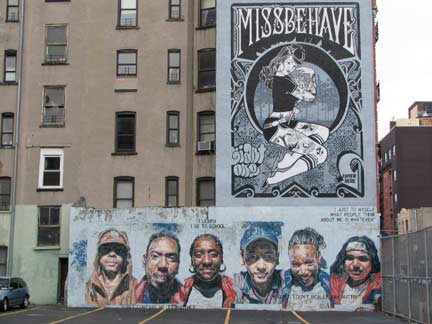 Murals, Stanton and Eldridge Street. The larger one is by tattoo artist/muralist Mike Giant (Giant One) and advertises a boutique on Eldridge.

The mural in front of us features a watercolor-like row of smiling faces, an effect achieved by mixing aerosol spray paint with water. “There are three types of graffiti writers: graffiti criminals, graffiti vandals, and graffiti artists,” explains local graffiti artist Antonio “Chico” Garcia, who has been painting the neighborhood for 30 years and is helping lead our tour. “We focus on showing the art part.” This particular mural is part of an outreach program that shows kids how street art can be constructive, not destructive. Inked Magazine 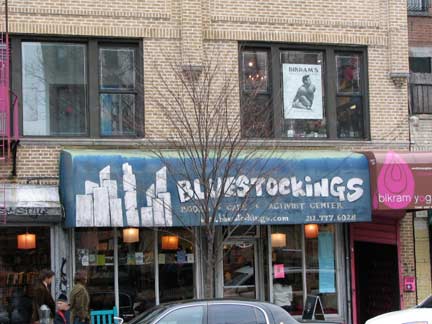 #172 Allen, just south of Stanton: Bluestockings is a left-leaning cultural center and bookshop named for a 19th Century term for scholarly-minded women. As far as I know, blue socks or panty hose are not on the dress code there, but I could be wrong. 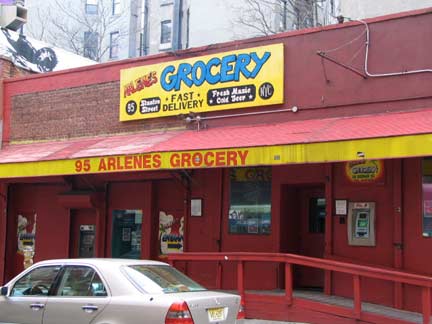 At #95 Stanton between Orchard and Ludlow, before 1995, Arlene’s Grocery was an actual grocery, with a butcher next door; the old sign was retained after it became a nightclub/concert space. Big name acts such as REM, the late Jeff Buckley and the Violent Femmes have played here. 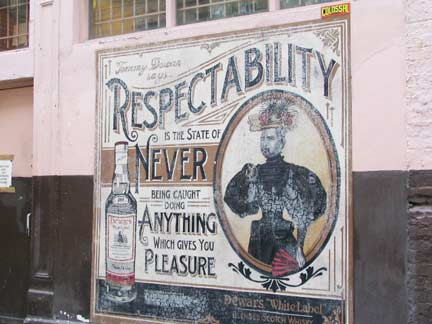 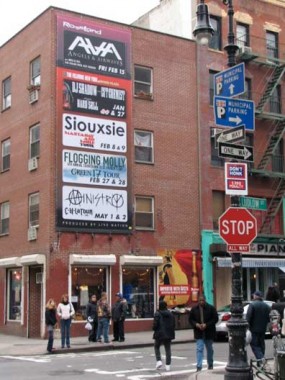 A newer building at Stanton and Ludlow has become a billboard for Roseland Ballroom uptown on West 52nd. In early 2009 Siouxsie (of the Banshees), Irish-American band Flogging Molly, and 1980s-1990s industro-rock band Ministry were appearing.

Next door on Ludlow is the facade of one of the Lower East Side’s premier music venues, Pianos, which like Arlene’s grocery retained the awning sign from its previous incarnation as a piano retailer.

Pianos is kind of an entertainment multiplex. The bar there doesn’t just feel like the antechamber to the performance space; it could stand on its own. There are two stages: one that has free shows upstairs in a funky loungelike setting and later brings on a D.J. spinning eclectic dance music; and one in a back room on the main floor where past concerts have found groups like Andrew W. K.and Clap Your Hands Say Yeah performing. NY Times 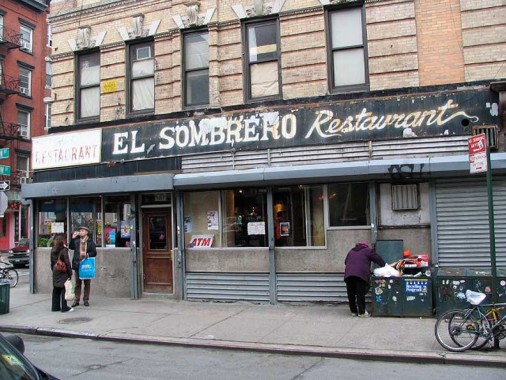 The standard Mexican fare is okay. The service is mediocre. The jukebox has decent Latin hits. But the whole is greater than the sum of its parts at this notorious Lower East Side eatery. Locals have been enjoying this corner institution since 1984, where the tacos and burritos are, if not sublime, at least served in generous portions. El Sombrero stays open late and has gentle lighting, making it a perfect late-night spot after an evening of barhopping. New York Magazine 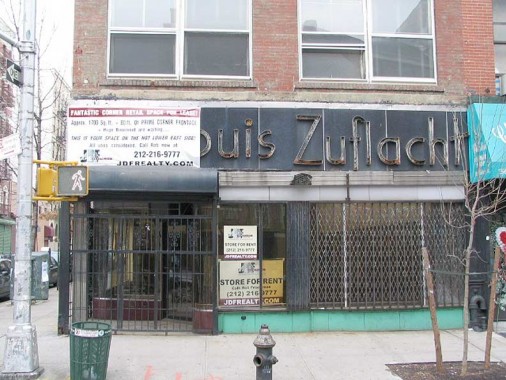 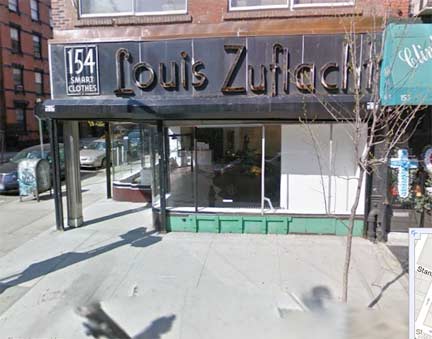 The famous Louis Zuflacht sign marks the former haberdasher at Stanton and Suffolk Streets. (The whole sign was revealed the day the Google Photo Truck passed by, at left). The space is now home to New York Studio Gallery. 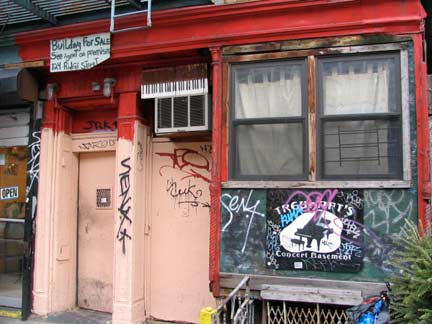 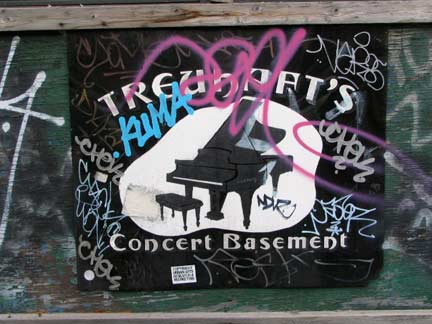 Turning south from Stanton on Ridge, I noticed an unusual door treatment and sign at #124 Ridge: a piano keyboard above the air conditioner, and a battered, graffitied sign saying “Treuhaft’s Concert Basement” above concrete steps, leading down to a gated basement. There had to be a story behind this, I thought, and I was right.

Upon visiting Cuba in 1993, Benjamin Treuhaft noticed that the remaining pianos in that country were being ravaged by humidity, decrepitude and termites, and the piano tuner decided to attempt to remedy the situation:

Treuhaft keeps returning to survey donated instruments and tune and restore others, striking an insistent chord against the U.S. trade embargo. After nearly 20 trips to the island -some without U.S. approval – the jocular former hippie who sports a bandanna on his head and likes to tune pianos barefoot is now a personality in some Cuban music circles.

“What he has done is very important for the music community in Cuba,” said Julia Diaz, a Cuban piano tuner who has known Treuhaft for 12 years. “He is very much beloved here.”

Cubans admire Treuhaft’s dedication to his craft, and delight in his playful personality. Concord Monitor

He now has US State Department permission to check on donated pianos. Although based mostly in Berkeley, CA, Treuhaft has worked at the Steinway and sons Concert Basement in NYC, and though I can’t find anything specific about a “Treuhaft Concert Basement” this place must have had some connection with him. The Google Photo Truck made a kore recent visit, and the old sign has disappeared, but the over the door keyboard is still there.

Can you locate a picture of Cannon St. As I was born on Cannon I thought it might be nice to see what it looked like. I know that there is still a small piece of it leftover.

My great great grandfather and his family lived at 94 Cannon Street on the 1900 US Census Records.

My great great grandmother was destined for 197 Stanton Street when she immigrated in 1910. Curious if this building still stands.

Just saw your post. I often stay across the street at 196 Stanton St when I visit NYC. There’s an apartment building at 197. Hope this helps. 🙂

Next to Nr 179 where Marianne Ihlen had her apt, and where Leonard Cohen wrote Famous Blue Raincoat.

I guess that’s Marianne on the mural. We walked past it 3 days ago. The mural is right next to nr 179. There’s a peaceful little park as well, all very Leonard-Marianne…