The title card shows what is likely the last Bishop Crook wall bracket lamp in New York City — a genre that I don’t think was all that frequently found even in the olden age of cast iron NYC lampposts, 1900-1950. As a rule, when a wall bracket lamp was needed, the city turned to other styles, most frequently a lang-armed lamp based on the Type G posts. I featured most styles on my Wall bracket Lamps FNY page several years ago.  It can be found on Nassau Street between Beekman and Spruce. 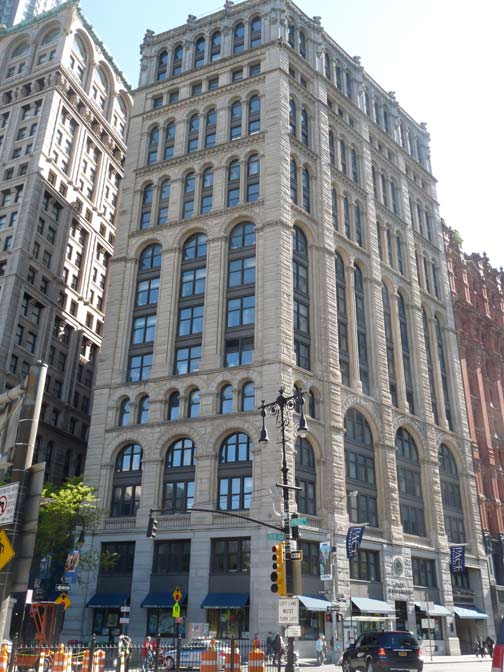 The lamp is affixed to the rear of this building on the SE corner of Park Row and Spruce, now used by Pace University but formerly the home of The New York Times. It was designed by prolific architect George Post and went up in 1889 with extra floors added in 1906. It stands in what was formerly known as Printing House Square, because Park Row was once known for the newspapers that were centered on Park Row opposite City Hall Park, among them the Times and Horace Greeley’s New York Tribune. On the opposite corner is a monumental statue of Benjamin Franklin.

The old-fashioned lamppost in the front is a 12-year-old creation, as the City installed taller versions of the familiar Twinlamps that had added ornamentation around City Hall Park around 2000. 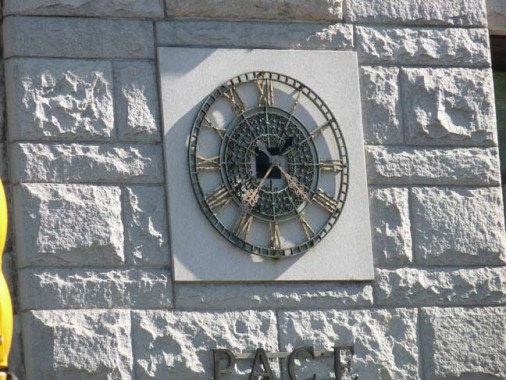 This clock — could it be an original? guards the front entrance on Park Row. 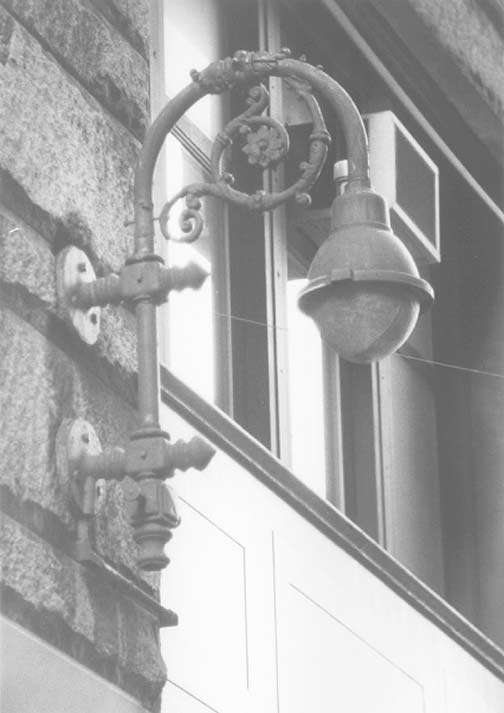 Here’s an older look at the Crook, when it still had its glass diffuser bowl.

Did the clock on Pace University’s wall still work when you visited?
It’s a shame many of the “outside” clocks
never seemed to run, no matter where you were in the 5 boroughs.

The Crook is a work of art.
The stories that fixture could tell!
It looks like the city was trying to duplicate one of your early creations in the header photo (smile)!

I have never noticed the clock or the Bishop Crook before,
Even when I have repeatedly passed by many times in the past.
It’s a shame the city tries to take down the lampposts of yore
And of those Bishop Crooks that are still standing, this may be the last.

How criminal that no one seems to want to spend a couple of bucks to replace the glass, instead leaving that bulb dangling forlornly. When will New York learn to cherish its heritage rather than tear it down or let it disintegrate to the point of no return? Absolutely shameful.

They should (really) fix that light and stop letting all the streetlights crumble. Also, what is that orange cap behind the light arm used for?

That houses the sensor that turns the lamp on at dusk, tho I think this bulb is burnt out