Again my ever ready Nikon D7000 was in use in my travels around NYC.  When you travel around NYC, as I do, you never know what you will encounter.  Most of the posted pictures here have been visible to New Yorkers for many years.  But a few have become visible due to demolition, collapse or even a sign falling off.  I have many more photos in  store for future FNY pieces.

In the title card, due to a building collapse on the NW corner of Frederick Douglas Blvd. (8th Avenue) and  West 125th Street back in September, 2011, this gem became visible after many years of being concealed.  A westbound bus was in the bus stop below the collapse.  Fortunately, no one was seriously injured on the bus or on the sidewalk.  Whew! 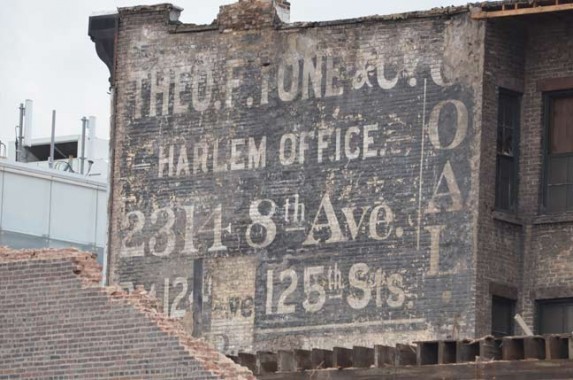 [I’d guess, from the lettering style, that this ad is quite old, possibly the late 19th Century. It’s for coal dealer Theodore F. Tone, whose uptown Harlem office was at 2314 8th Avenue between 124th and 125th.

As usual the Indispensible Walter Grutchfield was Johnny on the spot, and we learn that the ad dates between 1882-1908–ed.] 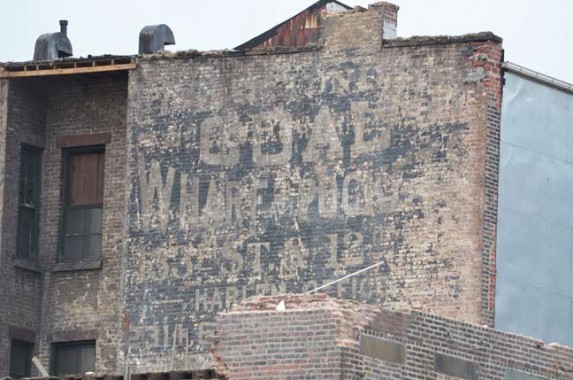 [The accompanying ad is a bit harder to make out and is probably also for Tone’s coal business. You can make out the words “COAL”, “WHARF” and “POCKETS.”

This is likely the oldest building ad to be uncovered by a demolition since 1998, when the “J.A. Keal’s Carriage Manufactory” sign briefly showed itself on Broadway and West 47th Street. That ad dated to 1878-1880. –ed.] 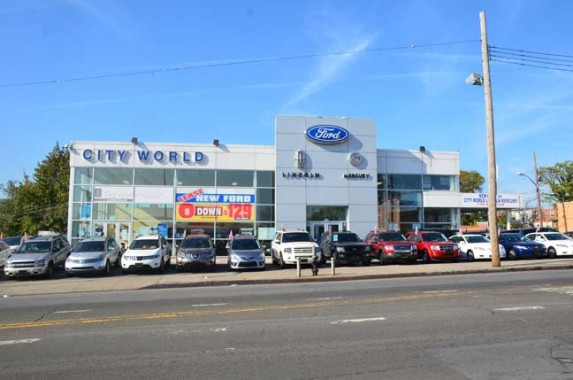 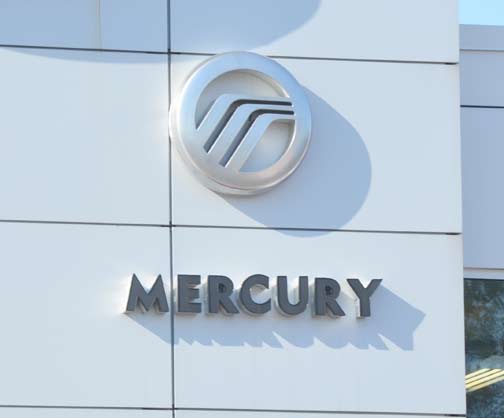 Somehow, management at this Ford Dealership on Boston Road just north of Gun Hill Road forgot to remove the Mercury sign. Ford dropped Mercury on January 11, 2011, but this sign was still up on the day of this shot on November 2, 2011.  Ford, along with industry experts, felt that they had too many brands in their portfolio and that they should concentrate on their core brands, Ford & Lincoln.  As a result, Ford dropped Volvo, Jaguar, Land Rover and Aston Martin.  In addition they reduced their ownership in  Mazda.  Their change in strategy is bearing fruit.  Ford’s sales are up and they are giving more attention to Lincoln.  To better compete with the many other luxury brands in the marketplace, Lincoln is introducing 5 new models over the next two years or so.

Mishkin Pharmacy, on the SW corner of 145th Street & St. Nicholas Avenue in Harlem, has made a previous appearance on FNY.  However, a special feature of the sign was overlooked.  A baked enamel sign was installed on the support column and on the corner of the sign above the column. 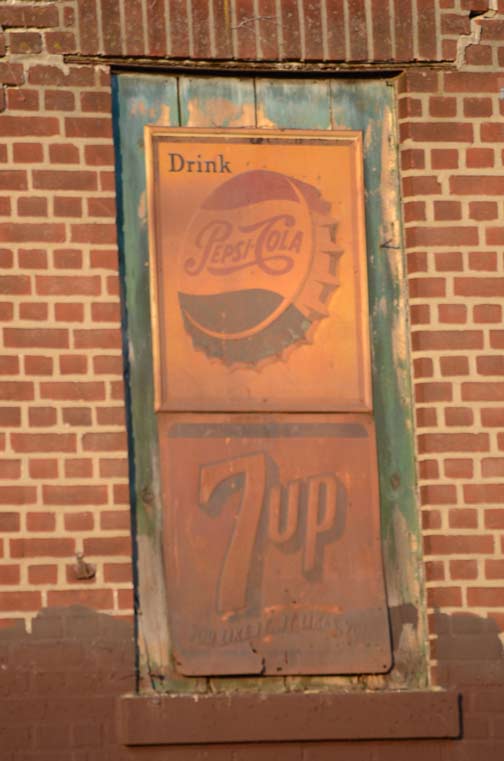 The SE corner of Nereid Avenue (238th Street) & White Plains Road in Wakefield, Bronx is the location of this double feature.  Maybe it dates from the 1960s?

[According to this, the bottlecap with the script Pepsi logo was featured between 1950-1962. After that Pepsi dropped the script and featured sanserif lettering.

Where does “7-up” mean? Nobody seems to know for sure. 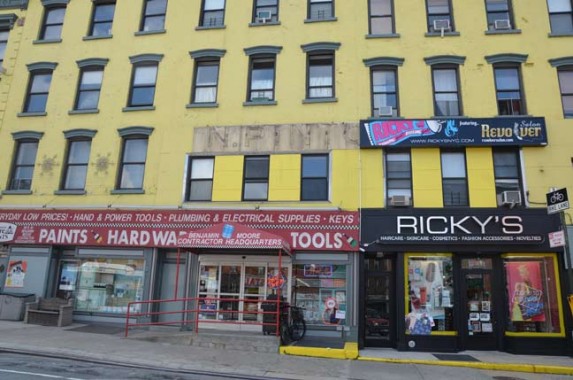 Could the wind be the cause of this old Pintchik Paint sign being revealed on the corner of Bergen Street & Flatbush Avenue in Brooklyn? 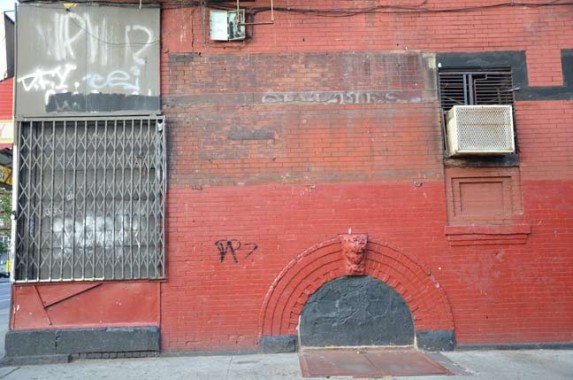 There’s not much left to this sign on the SW corner of 139th Street & Willis Avenue in the Bronx.  It seems like the word SPECIALTIES is all that remains. 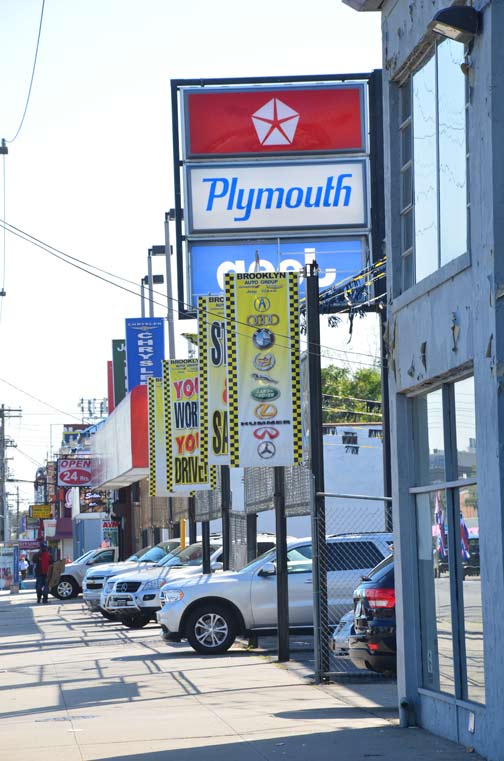 Again, we have an example of an auto dealership is slow to remove a discontinued brand’s name.  Chrysler dropped Plymouth in 2001 for basically the same reason that Ford dropped many of its ancillary brands. 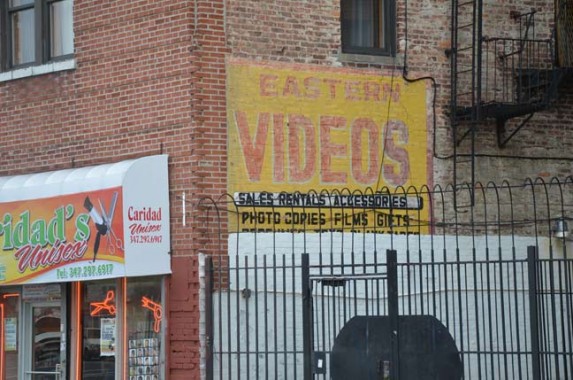 Due to the changes in technology, video stores are only a memory. Even the giant Blockbuster chain  ground to a halt.  Jerome Avenue, just south of Bedford Park Blvd. is the location. 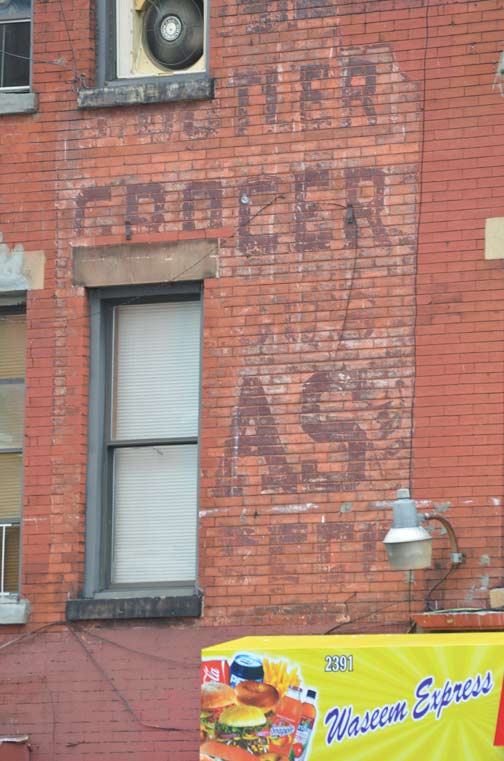 Campaign ads for State Senator and US Representative Paul Fino (1913-2009) on Crotona Avenue near East 181st Street and Morris Park Avenue near Adams Street in the Bronx. Fino was elected to the State Senate from 1946-1950 and elected to Congress in 1952, where he served 8 terms, and then the State Supreme Court in 1968.

A usually conservative though sometimes moderate Republican, Mr. Fino had a hard time swallowing what he considered the Manhattan-style elitism of  [John V.] Lindsay, who was mayor from 1966 through 1973. His needling of the mayor resonated with the mostly Italian and Irish working-class homeowners in what was then the 25th Congressional District in the Bronx. He represented them from 1953 to 1968.

In 1967, when he was also the chairman of the Bronx Republican Party, Mr. Fino called for all Republicans to oppose Mayor Lindsay, a fellow Republican, and his campaign to promote New York as “Fun City.”

On May 18, 1967, Mr. Fino stood on a ladder to finish affixing a 20-by-8-foot billboard beside the Willis Avenue Bridge, which connects Manhattan and the Bronx. The sign read: “Fun City Line Stops Here” and “Republicans of Bronx County Want No Fun Riots, Fun Taxes, Fun Crimes, Fun Mayor.”…

…In 1972, he sentenced a 23-year-old drug addict convicted of selling one-seventy-third of an ounce of heroin to 30 years in prison. NY Times 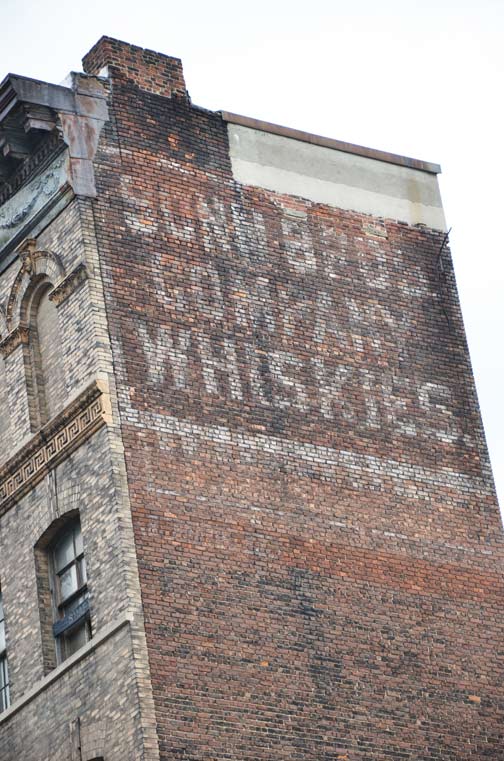 Does this liquor company still exist? The painted ad appears at 31 Desbrosses Street in Tribeca near West Street.

[Mr. Grutchfield is on the case: 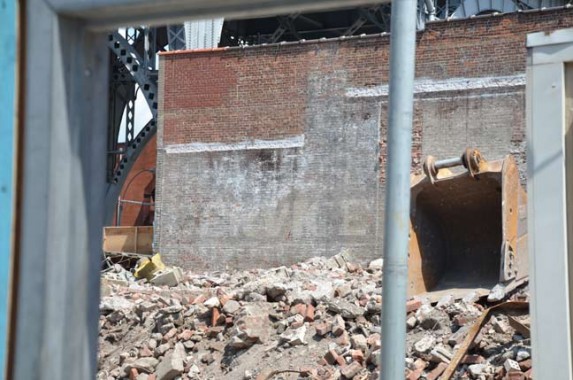 Construction/demolition reveals this sign on Riverside Drive near 131st Street due to Columbia University’s west side expansion. 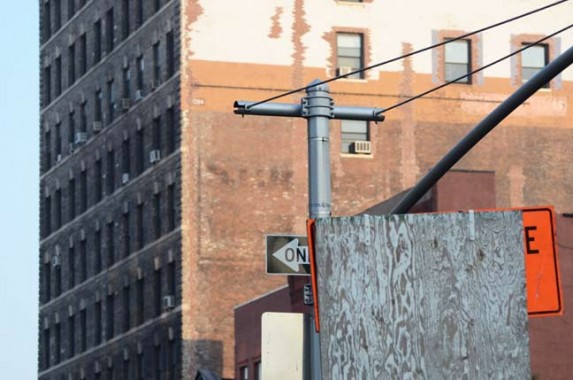 While waiting for an eastbound bus on E. 125th Street & Lexington Avenue, I saw this faded storage sign on a building located at Park Avenue & 125th Street in Harlem. 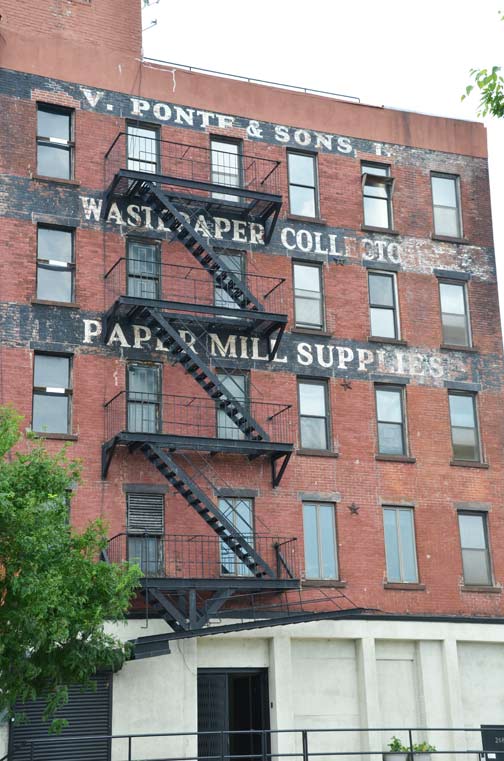 Malangone chose to go to trial and on October 21, 1997 he was convicted and eventually sentenced to 15 years in prison. He was released to parole supervision on April 5, 2010. wikipedia 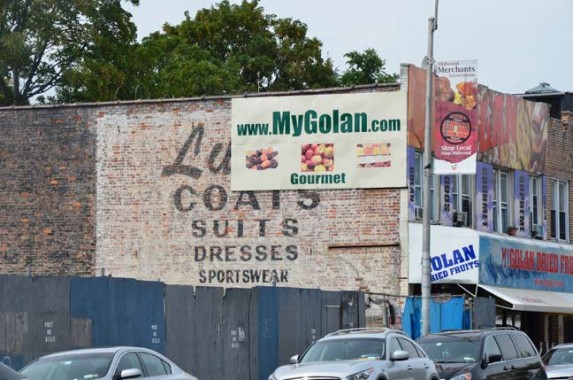 Coney Island Avenue, near Quentin Road. Anyone know what Lu… stood for? 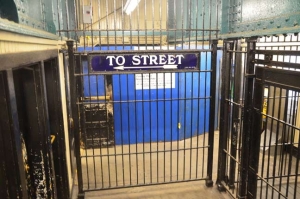 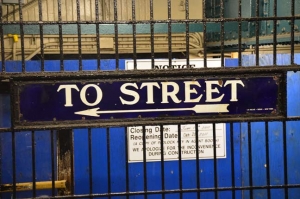 [As part of this series Gary Fonville found a small treasure on the mezzanine of the IRT Saratoga Avenue el station at Livonia Avenue on the #3 train. Enamel directional signs like this showing station names, exits, entrances, etc. were standard issue on the BMT and IRT until the Swingin’ Sixties, when signs began to be standardized into the white on black signs featuring at first Standard and then Helvetica sanserif lettering.

Until the 1980s, though, several of these signs were still around. The IND used them too, but they had a unique sanserif font. They have been all grandfathered out, and if the MTA is alerted to the presence of this one, it will be gone, too. Consider this sign definitely endangered. It’s s small work of art, with carefully crafted serif letters and shaped arrow.

The sign bears a mark for L.D. Nelke signs. The IRT and BMT used various sign companies, which have likely all gone out of business by now. I have seen Baltimore Enamel on other signs of this type.

Enjoy it while you have it. An in-situ subway sign is much more effective than one in a museum.–ed.]

I very much enjoy your site. I’m a big New – York City History fan ever since I lived there from 1977 to 1991, when I had to leave to care for my Mother. Anyway, I use to live by 6 St & Ave A, and at the Northwest corner was a old sign revealed. Not sure if it still there, but last time I was there, it was still there. Living 10 years in the East Village really gave a taste and appreciation of the old city, and has only grown stronger over the years. New York City, what a subject!

Love, love, love this site. I recommend it to anyone who has ever lived in or even plans to visit NY. Roger – I lived on St. Mark’s Pl. and 2nd Avenue above Stromboli’s Pizza in the 80s, so we might have crossed paths. Holiday Cocktail Lounge? Pyramid Club? Loved the Polish diners. I had no idea at that time what a rich history New York held, on the very streets I walked. This website keeps in touch with that history – thanks for keeping it alive!

Greetings,
I live on that very corner, and have lived there, well… let’s just say a few presidents back. The sign you refer to is, I believe, for “Physical Culture” shoes. But it was painted there as part of the set for the filming of “The Godfather, Part II” (!) in the early seventies. Amazing, huh?

There were many such sign visible even until very recently.

Well, BlockBuster may no longer be in New York, but the chain is still alive and well. We have at least one that I know of here in Spring Hill, FL.

Keying in a Queens ZIP Code to the Blockbuster site returned over a dozen locations still operating in the greater NY area. They announced in February that would be closing about 500 more stores this year, leaving about 1,000 retail locations open across the US.

Add to that the numerous independently owned video stores that are in poor neighborhoods, where people can’t afford DVD players, much less Netflix. Like pay telephones, videotapes are part of another era and their days are numbered, but in 2012, both still exist and are in use.

The partly-hidden sign on Coney Island Avenue is for a clothing store called Lupu’s, purveyors of the lovely polyester “ladies wear” that neighborhood moms (like mine) wore during the 1950s and 60s.

As I recall, the store was further along Coney Island Avenue (near Avenue M? Avenue H?). Despite the influx of Russians and other relatively recent immigrants, much of that part of Brooklyn remains the Land That Time Forgot in the visual sense. So it’s possible that Lupu’s is still open for business.

You have two old relics in one picture- in addition to the Plymouth sign the Chrysler Pentastar logo used from 1962 until the early 90s.

Ford didn’t discontinue those marquees you listed, they were in fact sold off to other car companies or to private consortiums with cars continuing to be manufactured to this day. Ford still owns a 12% stake in Aston Martin.

LOL to Lupu’s! Totally forgot about that one!

But with increasing Lupus awareness & sensitivity, their unfortunate name fell out of favor & were forced out of business by Lupus Lobbyists.

Ironically enough, a wig “emporium” has taken its place.

I remember an Odd Couple episode where Tony Randall as Felix Unger mentioned “Fun City” and the audience bust out laughing. Now I know what that was all about….

BIG fan of your site…love it. I grew up 3 blocks from Allens Cleaners Bedford park in the late 70’s. hasnt changed abit just the way i remember it… nice work

So I take it there’s not much hope of the old porcelain signs at Saratoga Avenue being preserved during the current renovation. Did anybody mention these features to the MTA, and try to talk them into preserving the signs?

Thye’re still there? Gotta get out there and get (photo) them