Forgotten New York’s 2nd tour of the 2012 season was Sunday, April 29th in Battery Park and Bowling Green. We met at South Ferry at noon and, once again, the weather was unusually spectacular for a ForgottenTour. That makes two in a row! We explored State Street, Bowling Green and Battery Park.

We made over thirty stops on the tour. Here’s just a few highlights. 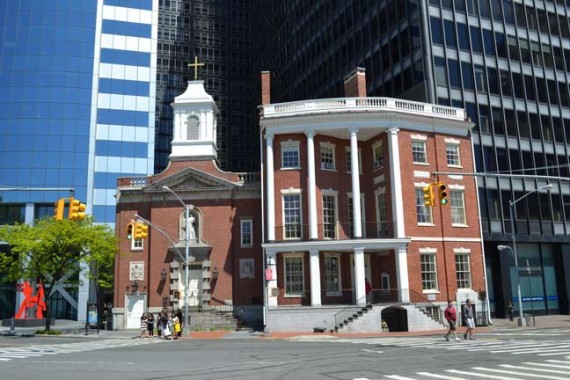 Originally the James Watson House, constructed between 1793-1806, making it one of the oldest buildings on the island, restored in 1965.

Mother Seton was born on Staten Island and baptized Episcopalian, later converted to Roman Catholicism after her husband’s death, and lived with her family here. She founded America’s first order of nuns (the Sisters of Charity) and established the American parochial school system. She was the first American-born saint and was canonized in 1975.

The Watson house is the last survivor of a group of Federal-style townhouses that once followed the curve of State Street. The right side is the oldest (1793) and the left the newest (1806). The curved porch features columns made from ships’ masts. 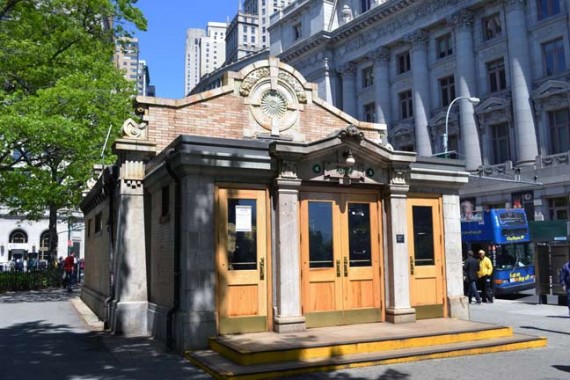 This subway station house serves the IRT 4 and 5 lines and was constructed by early subway architects Heins and LaFarge in 1905. Other stationhouses include ones at 72nd Street and Amsterdam Avenue and at the Atlantic-Pacific station in downtown Brooklyn. 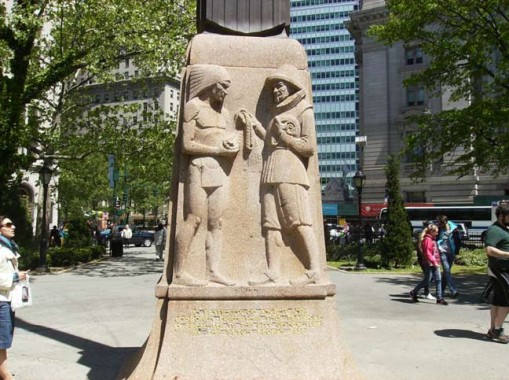 This flagpole at Battery Place and State Street, with gold-leafed inscriptions in English and Dutch, was a gift from the Netherlands to NYC in 1926, the 300th anniversary of the supposed purchase of the island by Peter Minuit from the Lenape in 1626. It was designed by H.A. van den Eijnde (1869-1939), a sculptor from Haarlem in the Netherlands.

Originally it stood south of Castle Clinton, then the site of the New York Aquarium. In 1939 the monument underwent restoration and the inscriptions were recut. Subsequently, a fire caused damage to the monument. When the park was closed from 1940 to 1952 for renovations and to build the Brooklyn-Battery Tunnel, the monument was relocated to its present site at the northeast entrance.

In the 17th Century the Lenape did not have the same concept of private property that the Europeans had. They merely believed they were selling rights to share the island with the Dutch.

In 2000, the flagpole was again renovated and rededicated. 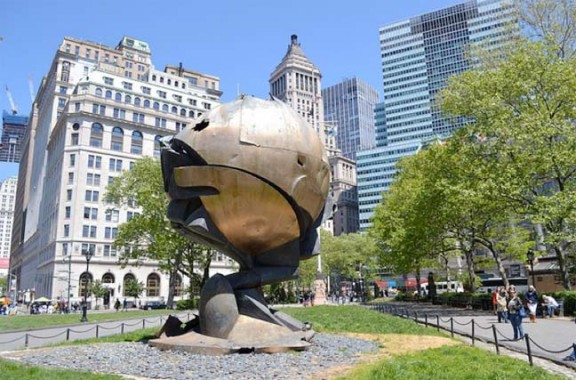 Five months after being damaged but not destroyed in the September 11, 2001 terrorist attacks, Fritz Koenig’s The Sphere, which once stood at the center of the plaza of the World Trade Center a few blocks away, was reinstalled in a temporary location along Eisenhower Mall in the northern section of the park. There, along with an eternal flame, it serves to memorialize the victims of 9/11/2001.

Recent plans call for The Sphere to be removed and placed in storage while a bike lane is built on the mall where it stands. 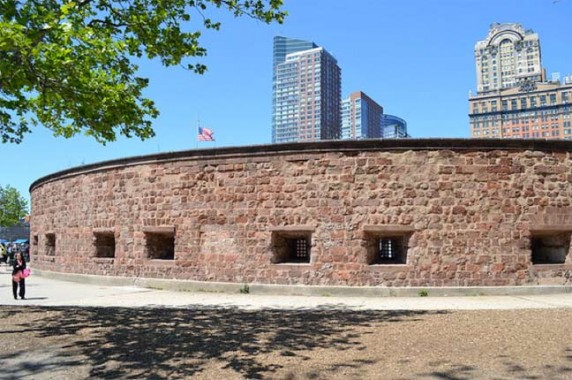 Originally called West Battery, Castle Clinton was built as a fort from 1808-1811 in the east River, 200 feet from the shore, in 35 feet of water. Its purpose was to defend the island against the British at a time of increasing tension between the USA and England, which eventually broke out into the war of 1812. During the war NYC was not invaded as Washington, DC was, possibly because of protection from forts like this. It was renamed Castle Clinton in 1815 in honor of former mayor and NYS governor DeWitt Clinton.

Castle Clinton was designated a national monument in 1946, ensuring its survival, and in 1975 it was restored to approximate its original appearance as a fort. Today the interior is home to a small museum, gift shop and ticket booths for Ellis and Liberty Island ferries. 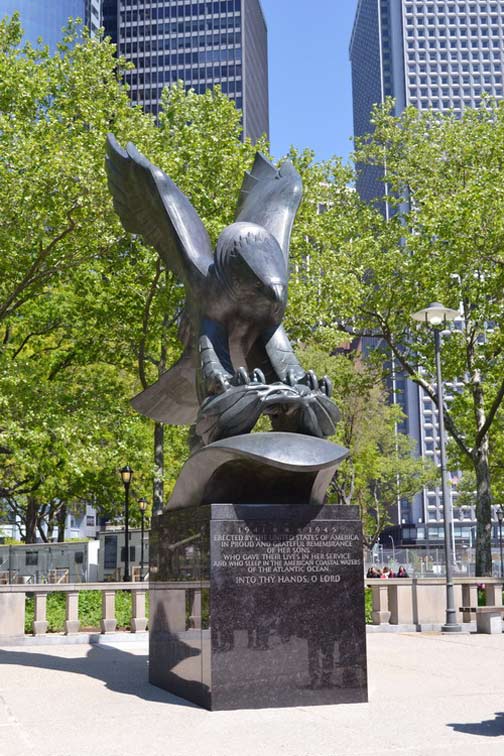 Facing the Statue of Liberty across New York harbor, the East Coast Memorial is located at the southern end of Battery Park. This memorial honors the 4,601 missing American servicemen who lost their lives in the Atlantic Ocean while engaged in combat during World War II. Designed by the architectural firm of Gehron and Seltzer, the monument consists of a large, paved plaza punctuated by eight massive 19-foot tall gray granite pylons (four each on the southern and northern sides) onto which are inscribed the names, rank, organization and state of each of the deceased.

On the eastern side of the plaza a monumental bronze eagle, sculpted by Albino Manca (1898–1976) and set on a pedestal of polished black granite, grips a laurel wreath over a wave–signifying the act of mourning at the watery grave. The monument was commissioned by the American Battle Monuments Commission (ABMC), a small independent agency of the executive branch of the United States federal government, and was dedicated by President John F. Kennedy (1917–1963) on May 23, 1963. 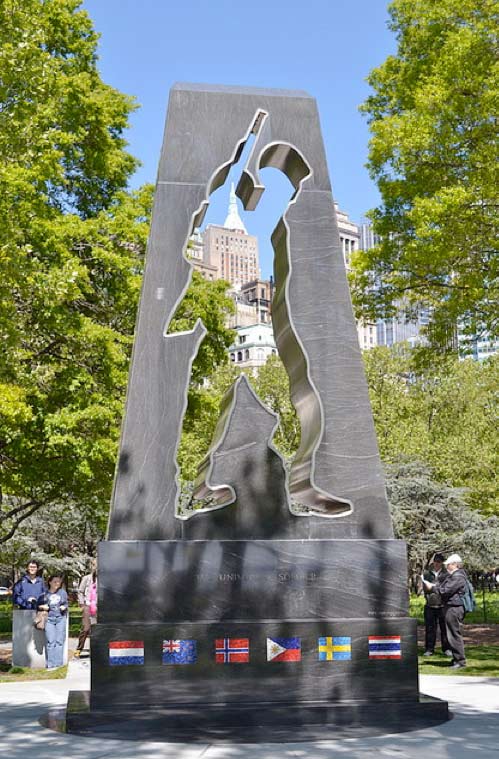 This monument in Battery Park, north of Castle Clinton, honors military personnel who served in the Korean Conflict (1950–1953).  The memorial, dedicated in 1991, was designed by Welsh-born artist Mac Adams (b. 1943) and is notable as one of the first Korean War memorials erected in the United States.

MARVELOUS!! Wonderful to sit home on a cold, rainy day and tour Battery Park!! Learned a little something!

BTW, I did some research on Elizabeth Ann Seton later that day, and I found out that Seton Hall University, located in NJ, is named for her, though it was founded long after she was dead.

Nice photos. Some added info from Wikipedia: “In 1941 the politically powerful Park Commissioner Robert Moses wanted to tear Castle Clinton down completely, claiming that this was necessary to build a crossing from the Battery to Brooklyn. The public outcry at the loss of a popular recreation site and landmark stymied his effort at demolition, but the aquarium was closed and not replaced until Moses opened a new facility on Coney Island in 1957.” It would take a week of ForgottenTours to highlight the neighborhoods ruined, and people displaced, by Moses’ arrogant devotion to the automobile!

Well said! And the truly ironic thing is that Moses himself never even held a driver’s license!

That aint the story I heard.
I heard the Indians sold the island cuz they thought they were pulling a scam on the dutch.The indians had no concept of real estate.To them buying land was like saying you were going to buy the ocean or the moon.
“Yeah,sure dudes.Here’s your island-(sucker)”
When they finally found out what the dutch actually had in mind all hell broke loose and the dutch had to eventually build a wall to stop all the pissed off indians from their hood.
And thus Wall St. began.

-and Greed is Good

Did anyone else ever go to the Sports Museum of America when it was at the Irving Trust Building, otherwise known as 26 Broadway, when it was there or am I alone on that?

I never did and I don’t know anybody esle who did.
I was turned off by the pricey admission and it just seemed to be something geared to tourists.
We have Halls of Fame and museums for every imaginable sport, I never thought there needed to an “Sports Museum of America”

I was there and it was interesting. But I was comped on admission. Btw, 26 Bway is the old standard oil building. Look on the roof for replica stone oil derricks. Irving trust is now bank of NY at 1 wall.

Not being a sailor, I get confused about identifying the boundaries of different bodies of water. I am never sure how to know just how to state, for example, that the West Battery (Castle Clinton) is in the East River as opposed to the Hudson (or North) River, or simply in the Upper Bay. Can any navigators help me?

I think our webmaster, whom I deeply respect, misspoke this time. There are no clear boundaries at the tip of Manhattan island between the East River, the Upper Bay and the Hudson River, but Castle Clinton is very clearly on the western side of Manhattan, which would place it in the Hudson River. (BTW the Upper Bay is New York Harbor from the Battery to the Narrows, the Lower Bay is the harbor from the Narrows to Sandy Hook, though again the boundaries are kinda muddy….

Fort Hamilton, Fort Wadsworth and Governor’s Island Fort would have been a tough nut to crack for anyone coming into New York by sea, although they were probably built after 1812 (?).