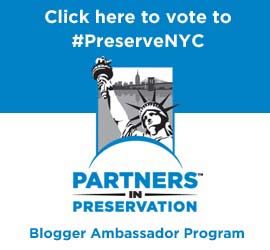 Through the partnership, American Express and the National Trust for Historic Preservation seek to increase the public’s awareness of the importance of historic preservation in the United States and to preserve America’s historic and cultural places. The program also hopes to inspire long-term support from local citizens for the historic sites at the heart of their communities.

From April 26 through May 21, 2012, local residents and people across the country are encouraged to vote for their favorite of 40 historic places throughout the five boroughs of New York City to receive preservation funding.

Voters are allotted one vote per day, which can be cast online in three ways: via the desktop website, the mobile website, or Facebook. Additionally, people can post personal stories and share photos on the Facebook page throughout the program. The four projects that receive the most public votes will have their grant requests fully funded, and the remainder of the $3 million in grants will be given to a number of the other sites after review by American Express, the National Trust for Historic Preservation and an advisory committee composed of civic and preservation leaders from New York.

Woodlawn Cemetery is one of the largest cemeteries in New York City and is a designated National Historic Landmark.

A rural cemetery located in the Bronx, it opened in 1863, in what was then southern Westchester County, in an area that was annexed to New York City in 1874.

The cemetery covers more than 400 acres and is the resting place for more than 300,000 people. There is a memorial to the victims of the 1912 RMS Titanic disaster, called The Annie Bliss Titanic Victims Memorial. Built on rolling hills, its tree-lined roads lead to some unique memorials, some designed by McKim Mead & White, John Russell Pope, James Gamble Rogers, Cass Gilbert, Carrère and Hastings, Sir Edwin Lutyens, Beatrix Jones Farrand, and John LaFarge. As of 2007, plot prices at Woodlawn were reported as $200 per square foot, $4,800 for a gravesite for two, and up to $1.5 million for land to build a family mausoleum.

In 2011, Woodlawn Cemetery was designated a National Historic Landmark, since it shows the transition from the rural cemetery popular at the time of its establishment to the more orderly 20th-century cemetery style. wikpiedia 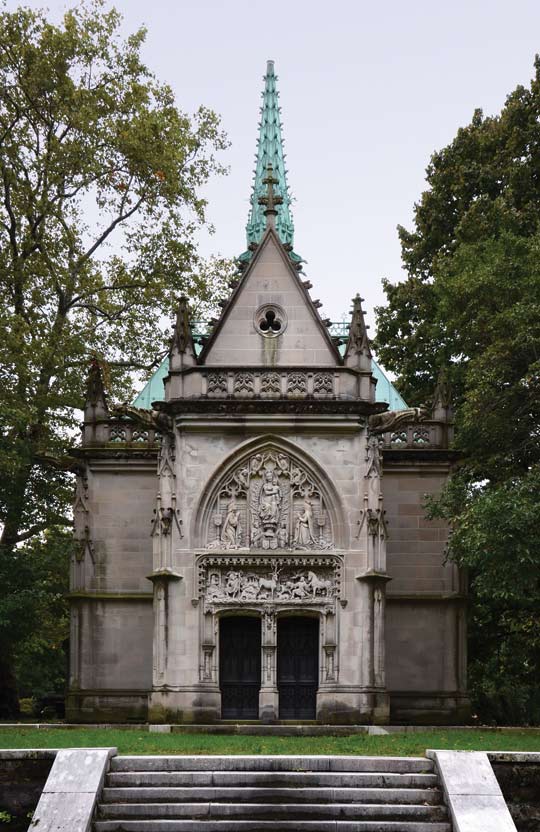 At the entrance to the Woodlawn Cemetery stands the Belmont Memorial Chapel, one of a few private mausoleums open to the public. Commissioned by Alva Vanderbilt Belmont, it exhibits the best of Gilded Age craftsmanship. Created by masons, sculptors, and stained-glass artisans, the impressive structure contributes to what is considered the nation’s finest collection of funerary art. Partners in Preservation
photo: Museum Planet

Oliver Hazard Perry Belmont (1858-1908) was the son of financier August Belmont Jr, for whom the Belmont Stakes, the third leg in horse racing’s Triple crown, is named. After a stint in the Naval Reserves, Oliver Perry became a multimillionaire after inheriting his father’s wealth and built the huge mansion, Belcourt Castle, as a summer home in Newport, Rhode Island. He was was elected as a Democrat from New York’s 13th District to the Fifty-seventh Congress (March 4, 1901-March 3, 1903). 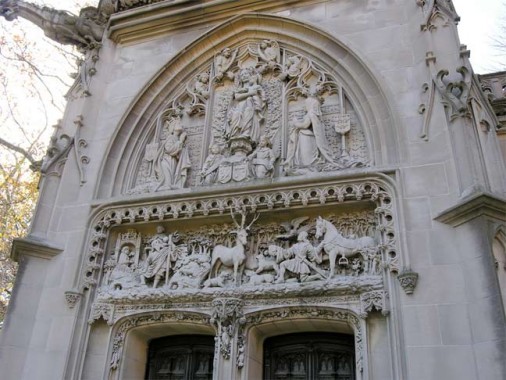 His family mausoleum, designed by architect Richard Morris Hunt, where he and his wife, Alva Vanderbilt Belmont, are interred, is an exact replica of The Chapel of Saint Hubert at Chateau Amboise in France, which was designed by Leonardo DaVinci.

St. Hubert is the patron saint of hunting. Mary and the Christ child are above. King Charles VIII is on the left, and his wife, Anne of Brittany, is on the right.

Beneath, in the lintel, is St. Anthony (far left) and St. Christopher (with Staff and Christ Child on his shoulders). The story of St. Hubert is portrayed: Hubert was out hunting on Good Friday when a stag bearing a crucifix between his antlers appeared and converted Hubert to Christianity. Museum Planet

You can vote for the restoration of the Belmont Memorial Chapel, or other sites if you choose, at the Partners in Preservation website and from other devices. Remember, you get one vote per day.

I have partnered up with Partners in Preservation as a blog ambassador to help spread the word and raise awareness of select historical sites throughout the tri-state area. Though I am compensated for my time, I have not been instructed to express any particular point of view. All opinions expressed here are strictly my own.

So happy you posted this…I voted for Woodlawn because I love to visit Alva, Irving Berlin, Herman Melville, Miles Davis & Duke Ellington and the many, many people resting there who made New York (and this country!!) great!! Civil War soldiers, scientists, financiers, and show people all share some lovely acreage! Glad there is still room for me and my husband!!!

Oliver and Alva Belmont also owned a summmer estate called Brookholt at East Meadow in Nassau County (where Oliver died in 1908) on property that straddled Front Street at the Uniondale border. The Meadow Brook trickled through the property and still does as a muddy little ditch but most people know that name today only as a parkway.

A very interesting fact I was unaware of till this moment, having lived and played on Long Island over 40 years! I found this link: http://www.oldlongisland.com/2011/05/brookholt.html. I wonder how many homes it takes a scion to be happy.

Oliver Belmont’s summer home in Newport, Belcourt, is open as a museum on a limited schedule. check out http://www.belcourtcastle.org. Belcourt’s owners took many photos of the Belmont Tomb on a visit about 25 years ago.

Mr. Tinney, is your family descended from Thomas Tenney, who arrived in Massachusetts in 1638?

Does anyone know, is the August Belmont Jr. mentioned in the article the same man who financed the NYC subway?

Along with other cemeteries FNY has covered, Woodlawn deserves a full page. Sixty years ago, it was fun searching out its Confederate generals, gangsters, and crooked politicians!