Shown in the title card is the intersection of Ocean and Parkside Avenues, where one of four subway stations facing Prospect Park can be found. This one serves the Q local, which currently runs, when it is running a complete route, from Ditmars Boulevard in Astoria to Coney Island, where it shares a terminal with the D, N and F trains. The Q subway designation is an old one and is a legacy of a pair of lines, the QB and QJ, which traveled in Brooklyn and to Jamaica. The J is the descendant of the QJ, while the Q  is a descendant of the QB, more or less. There was a lot of intertraffic between the lines.

The other three subway stations fronting on Prospect Park are 15th Street on the F, Prospect Park, the next station on the Q, and the Grand Army Plaza station serving the 2, 3 and 4. 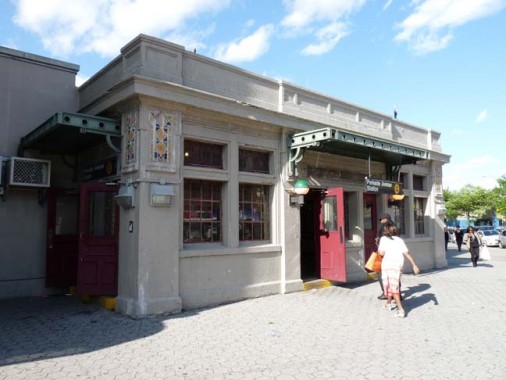 The Brighton Line is in the BMT division and is the descendant of a surface steam railroad, the Brooklyn, Brighton and Coney Island. After 1900, southern Brooklyn slowly began to evolve out of its open fields and farms into a more urban environment, with a street grid, residential housing, and business districts. Hence, the old railroads electrified and eliminated grade crossings. By 1910 most if not all of the Brighton’s grade crossings were eliminated or placed on embankments or elevated segments, and this handsome station entrance is typical of what was then a blossoming mass transit system. Most, if not all, BMT (Brooklyn-Manhattan Transit, which replaced the bankrupt Brooklyn Rapid Transit after 1918) stations featured a terra cotta, brightly-colored diamond motif, which is seen here.

The entrance is placed on a slant athwart the corner because here, the Brighton Line travels on a diagonal beneath the intersection. 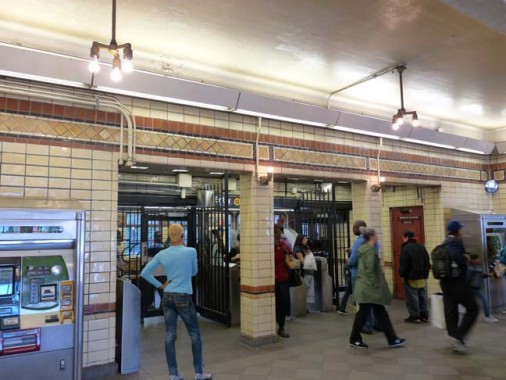 After decades of decline that happened because of: the persistence of the nickel fare way past the point of practicality (1948); the fiscal crisis of the 1970s and unchecked lawlessness that nearly completely trashed the subways; and a general sense in the zeitgeist by city authorities that the subways, and their working-class clientele, were not really worthy of a first-class transportation system — the trains have experienced a renaissance over the past 2 decades, with vastly improved station updates as well as new systems informing patrons when they can expect the next train.

The city has done right by the Parkside Avenue stationhouse. Overall design esthetics have come round once again to the simple mosaic, tile and terra cotta in its the “fare control” area. Unusually, here the original pendant ceiling lamps still work, and have been given new longer-lasting fluorescent bulbs. 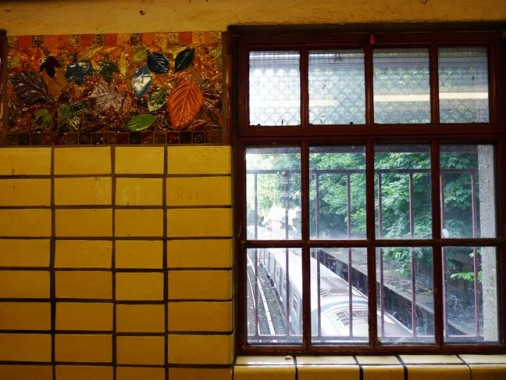 A number of stations on the Brighton Line stand just above the tracks (notably the Beverley and Cortelyou stations), and waiting areas have a good view of the tracks and trains plying the line. The station is also graced by a terra cotta work by Susan Tunick, Brighton Clay Re-Leaf. (She also wrote one of my favorite books, Terra-Cotta Skyline: New York’s Architectural Ornament.)

My attraction to the Parkside Avenue station is that it’s one of NYC’s subway stations that’s half in the light, half out of it. A few years ago I did a page on the Hunters Point Avenue station in Queens, which is officially underground, but with the outside world visible from the east end of the tracks. Probably the best-known station in this vein is the Wilson Avenue station on the L Canarsie Line, in which the top (southbound) platform faces Trinity Cemetery and the bottom (northbound) station is completely underground. 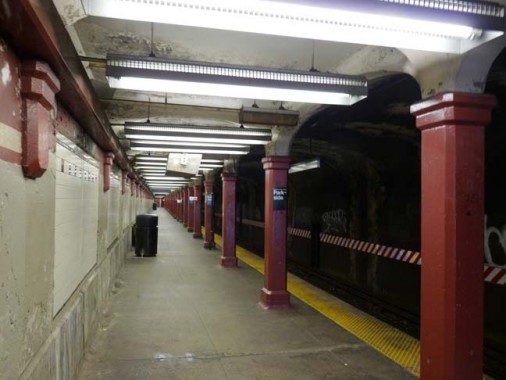 This station opened on April 4th, 1905 as part of the BRT and like many of southern Brooklyn’s train stations, the original pillars and station ornamentation are still intact. This is the southern half of the station, under the intersection, which is all underground. 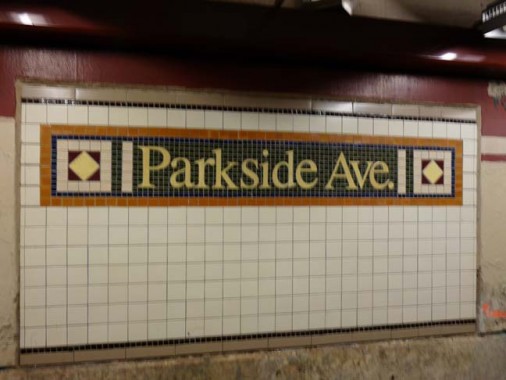 In the 1980s, the Parkside, Beverley and Cortelyou stations were supplied with new wall art and ID plaques. They are the only three stations in the subways that employ the Times Roman typeface, which first appeared as the text font of the London Times in the early 1930s.

This is an unusual version of Times, because of the tall x-heights (all the rage in the 1980s) and uneven heights (note the the s and i are different heights). The use of the diamonds is consistent with BMT construction.

A DIFFERENCE OF OPINION, Sheepshead Bay

“The entrance is placed on a slant athwart the corner because here, the Brighton Line travels on a diagonal beneath the intersection.”

I don’t think that’s the reason. Take a look an aerial photo of the intersection. Parkside and Ocean don’t meet at right angles. The parcel at the corner is almost Flatiron-shaped. The front of the station lines up nicely with the building to its left in the photo.

The Q subway designation dates from 1960 when the TA replaced the old BMT rolling stock with then-new R27/R30 equipment. These cars were the first to use IND-type roll sign letter designations, which did not become official until 1964. The signs used IND style single letters for express trains and double letters for locals. The TA designated the Q as the Brighton Express, which ran Mon-Friday between 57th Street and Brighton Beach, over the Manhattan Bridge. The locals were the QB and QT. The former ran between Astoria and Coney Island nights and all day weekends, via the Manhattan Bridge (hence the “B”), making all stops, so it is the direct ancestor of today’s Q train. The QT ran between Astoria and Coney Island Mon-Fri, when the Q ran, via the Montague Tunnel and Lower Manhattan (hence the “T”), making all stops.

The November 1967 Chrystie Street re-routings ended the Q and QT and created a revised QB that ran rush hours only to/from 57th Street, again a direct ancestor of today’s Q. The QJ was also created in Nov. 1967 and operated between Coney Island and 168th St-Jamaica Ave. via the Brighton Line, Montague Tunnel, and today’s J route. By merging the Brighton and Jamaica El routes the QJ moniker made complete sense. It was shortened in 1973 to today’s J routing, retaining the QJ designation, and was re-named the J in 1976.

The Brighton Local, starting in the late 50’s and into the early 60’s, ran from 71st Continental Ave in Forest Hills to
Coney Island. The 4th Avenue Local ran from 95th Street Brooklyn to Astoria. Also, the Brighton Express was designated with a number: 1 up until the early sixties when it became the Q.

The lettering on that tile sign! First things first: let me know why the P,k,i,d,A are in a smaller point size, and why it doesn’t all rest on a straight horizontal line. Then we can talk about the finer problem of jamming letters too close together.

This does remind me that there is something worse than Helvetica. Thanks I needed that.

When I was a small lad, we used to go past this station to enter Prospect Park for a great day….

The Brighton Line Prospect Park station is also half underground / half outside.