In a super-rare occurrence, a Chelsea business has rid itself of  a newer sign in favor of an older one that had been hidden for years. This laundromat at 9th Avenue and West 22nd had carried a newer version of this maroon and white sign for several years (see it on Google Street View) , but on a stroll in early August 2013, I found the older one had been mysteriously uncovered again! 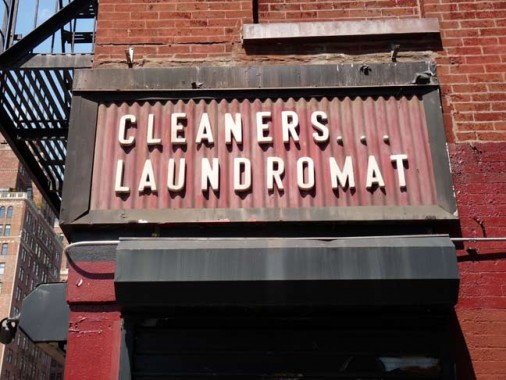 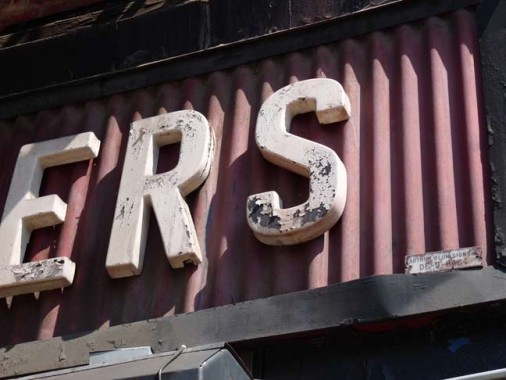 …it’s all about the texture.

Undoubtedly something is up here, and the laundry is soon going out of business or has another sign ready to be installed over this one. But enjoy it while you can. 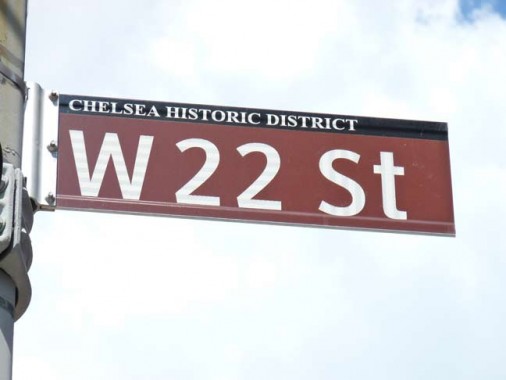 The color scheme is even  a match for the maroon and white Landmarked District street signs.

I love old signs. I always take pictures of them when ever I come across them… There’s a deli on 116th and Frederick Douglas Blvd that has an old Coca Cola sign like this one .. Love it!

I see what you’re doing, you little dickens you!

Actually, I like it from an urban historical/sociological standpoint. Aesthethically? Eh, mezza mezza. If it didn’t match the street sign, possibly an even lower opinion of the artistic worth. But form follows function. The store does what it says on the wrapper. How many times have you walked down a street, seen a new business across the roadway, and wondered what sort of business it was, because you couldn’t know just going by the sign? Not a problem here. Could be prettier, but so could life.

Dry clean on premises? Can that sign be accurate anymore? I thought the use of “perc” (the chemical dry cleaning uses) was now illegal in buildings with residential use, so practically all Manhattan dry cleaners send out for it. There are apartments above this…

Fantastic items from you, man. I have understand your stuff prior
to and you’re just too excellent. I actually like
what you have got here, really like what you’re saying and the best way by which you say it.
You are making it enjoyable and you continue to care for to keep
it sensible. I can not wait to learn far more from you.