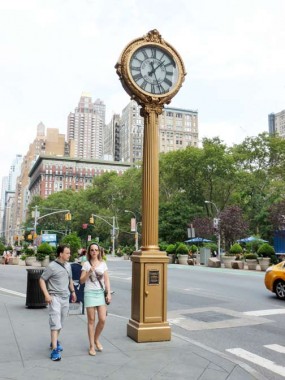 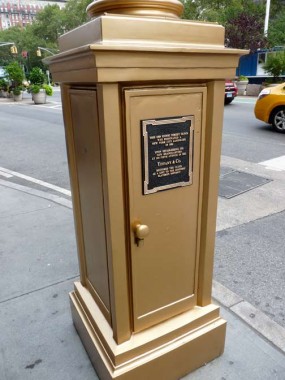 In the late summer and early fall of 2013 I have been working at 200 5th Avenue on the corner of 23rd Street opposite Madison Park, an intersection that preserves two classic Twinlamp castiron lampposts as well as this gilded, ornate street clock, perhaps the most magnificent still existing in New York City. It was installed in 1909, at the same time 200 5th was built. Originally, 200 5th was called the Fifth Avenue Building (its elevators still were showing the FAB initials on their interiors before they were replaced after 2003). Through much of its history the building was home to the International Toy Center and since 2011 it has hosted the offices of Tiffany, Inc., which sponsored the restoration the clock that year by the Electric Time Company. Hecla Iron Works of Greenpoint, Brooklyn, named for an Icelandic volcano, built the clock, as well as many of the long-gone subway exit and entrance kiosks (the last of them disappeared in 1967).

The Fifth Avenue Building replaced the elegant Fifth Avenue Hotel, which had had its own street clock that was torn down when the hotel was, in 1908.

>> The Fifth Avenue Building replaced the elegant Fifth Avenue Hotel, which had had its own street clock that was torn down when the hotel was, in 2008.

I was in a rush

We did a lot of research on this clock, seems as though the original clock was a two dial Seth Thomas that was replaced at the turn of the century with the current clock. In my 30 years in the clock business I’ve never seen a clock of such quality, I believe this clock is the most magnificent street clock in the world.

[…] the camera pans around, you can see the Fifth Avenue Hotel street clock, a replica of which still sits in that very […]

[…] the camera pans around, you can see the Fifth Avenue Hotel street clock, a replica of which still sits in that very […]

Hi. My name is Bob Anderson. Washington DC. My wife and I walked fifth street from wash Park all the way up to Bryant Park today December 6, 2017. The one notable item along the way was this clock. I took a few pics and told my wife that this was a real treasure for New York City.