I haven’t spent enough time in Battery Park City, the 40-year-old neighborhood built on landfill above Battery Park, piecemeal beginning in the 1970s. I’m working with limited time available, but I recently read that the landfill did not come from excavations for the first World Trade Center constructed from 1970-1974. From whence did it come? I do plan on giving BPC a longer, belated look in a couple of years, once there’s some semblance of stabilization from the relentless construction and crowding in the area — if that ever happens. 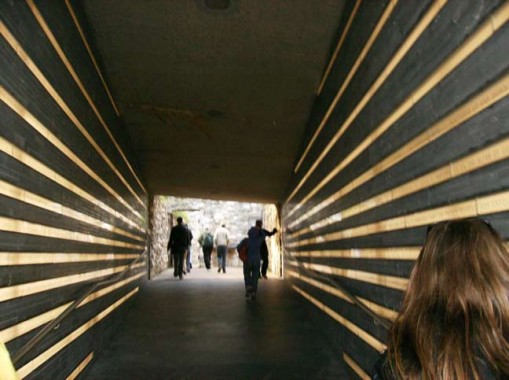 I have been able to do some gradual exploring, though, and there are some quiet pockets, such as the Irish Hunger Famine Memorial. The memorial is dedicated to raising awareness of  the Great Irish Famine that killed up to a million in Ireland between the years 1845 and 1852, and the resulting waves of immigration to the United States beginning in those years. The Memorial occupies a half acre at North End Avenue and Vesey Street and was  designed collaboratively by artist Brian Tolle, landscape architect Gail Wittwer-Laird, and 1100 Architect. It was dedicated on July 16, 2002. 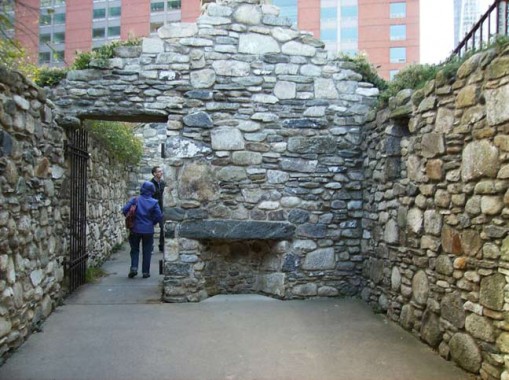 The landscaped plot employs stones, flora and soil imported from the western coast of Ireland, and incorporates an actual 19th-century Irish cottage. The names of some of the immigrants are displayed on the sides of a lengthy corridor, a dark passageway that leads to an open space that looks larger than it does given the limited half-acre space. Visitors can mentally shut off the traffic noise and pretend they’re on a high hill in the western counties.

Following the famine, 800,000 Irish immigrants found their way to the United States, a good percentage of whom settled in New York City.

My mother’s family came from the Co.Leitrim,Ireland, and I just recently visited the Irish Hunger Memorial,and found it to be very moving, I felt the pain, with ready the sayings on the walls,the warmth of the fireplaces,the disappointment of no crop, to feed the family, and at the top looking out to the water,felt like,I was looking to a new,and bright future..I have never been to Ireland,myself, But that day, I truly felt like I knew what it would be like if I were there,in Ireland……..
God Bless America,and God Bless Ireland too !!

The landfill beneath Battery Park City came from the excavation of the first World Trade Center. I worked in constuction in NYC for 43 years including 3 on the WTC. In 1967-68 or so I watched from 140 West St (telephone bldg) while dozens and dozens of dump trucks hauled dirt from the WTC excavation site to the Hudson River. I worked on Bldg #5 of the Trade Center from 1970-1973 on the corner of Vesey St and Church St where an old Dutch sea wall was found in the excavation approx. 100 yards West of Church St (near Vesey St) which means the Hudson originally came a lot further east than Battery Park City.

To the best of my knowledge, fill for Battery Park City came from a few places, two of which were the original World Trade Center excavation and Water Tunnel #3.

Wonderful pictures…..my husband and I found this last August as we wandered the area on a visit to NYC and Jersey City. Like many other people we were wondering what it was. It’s quite lovely and very unusual.

My mother’s family came from both Dublin and the town of Balla in County Mayo, with my grandmother coming here in 1899 at the age of fifteen. I remember her talking of the hunger in western Ireland, every St. Patrick’s Day she would laugh about corned beef and cabbage and say, “Corned beef? If we could have afforded just the cabbage we would have stayed home!” She lived to be 94 so I got to hear a lot of history from her….I still miss her, tho she passed in 1977.

From a distance, it looks like an advanced putt putt course or a skateboard park. So imagine my disappointment to find it a potato memorial. Cannot think that this is the highest best use for 1/2 acre of waterfront in Manhattan. Boggles the mind to think how it was approved and permitted. Ugly, socially aware monument that says all the right things, which means nothing.