162nd Street in east Flushing, almost Auburndale, seems to be making a comeback after a couple of years suffering under a sewer replacement project. Here are three venerable institutions in the shadow of the LIRR Northern Boulevard overpass. Oddly enough I’m told Steve’s Coffee Shop has been on the block longer than any other business on this strip, but in my 14 years in the neighborhood, I think I went in just once! 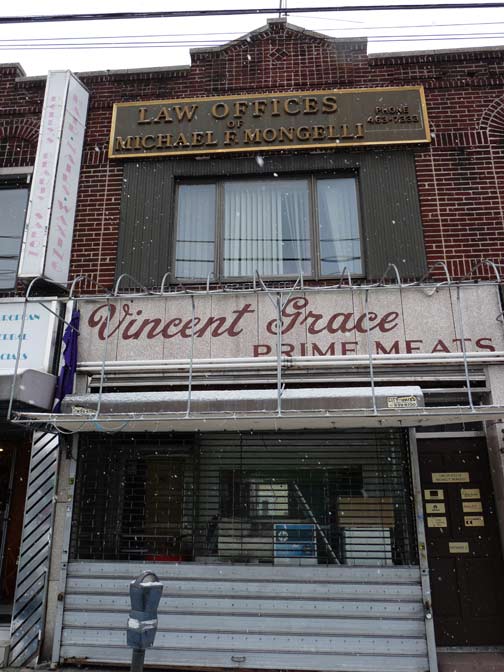 I lived on 159th Street from 1993-2007; this was my butcher, though the awning sign always had covered this venerable linoleum sign I never suspected was under there. In around 1999 this shop closed and I patronized a different butcher a block further south, another traditional shop with sawdust on the floor. Then they too closed, as did the local supermarket. I don’t know what people around here do for meat any more. 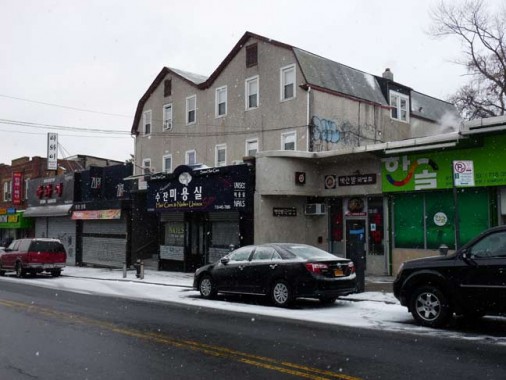 In that butcher shop hung a photograph of what 162nd Street looked like in 1922, when it was known as 22nd Street. Everything on the west side of the street was unrecognizable except for these two attached houses, which are still there.

Steve’s has been there for at least 30 years, my parents used to take me there every Sunday morning for breakfast when I was a kid. Then from 2000 – 2002 my husband and I lived two blocks away, yet never went there…

In 2012, the FAA introduced the new NextGen flight path from LGA. Every 30 seconds, for 20 hours day you can hear nothing but low flying planes on 162nd and Northern. Its making the area unlivable.

Good to see Steve’s going strong. Probably the only place in the neighborhood you can get a hamburger any more

Steve’s Coffee Shop, Petrocelli insurance & tax, Fratelli’s pizzaria, Leiser’s Liquors, Law offices of Michael Mongelli, Mallilo and Grossman law firm,Kessler Signs, Paddy Quinn’s, Jimmy’s barber shop, Ez accounting, Speedy Printing, Hansol (where the pharmacy used to be)…Yes there is still a long way to go to get back to what 162nd street was, but it is picking up again. If you support local business instead of huge chains then small neighborhoods will still be able to thrive.

Hi, just wondering does anyone know if Vincent Graces butcher shop was run by a family member of him ?trying to figure out if he had children. The reason why I’m asking is that I’m tracing my family tree from Ireland and I came across Vincent Grace( his father immigrated to NY) I was told that he opened up a Meath shop on 162d street just south of Northern Blvd in the broadway section of flushing . So I googled his name and address and it showed me his shop?why did the meat shop close? Does it still look the same on the outside?

I lived on 162 st in early 70’s, regal Pharmacy was on corner of Sanford Ave, Leisers Liquors was 2 stores down Right next to Ruth & Murray Stationary Store, Next Grace meats was simones bakery and Jimmys was the Broadway Barber Shop withg Nick & Chris, and across the street from the barber shop was the Velvut Cup Boy those were the days