The Harriet Onderdonk Building at South Street and Peck Slip, later known as Meyer’s Hotel, was built in 1873 at a cost of $30,000. It was designed by architect John B. Snook, who among his many notable projects designed the original Grand Central Depot on 42nd Street in 1871 (the one the present Grand Central Terminal replaced in 1913), as well as many buildings in the Soho Cast-Iron District. Originally, the first floor housed stores while the second, third, fourth and fifth floors were loft space. Up until its present use as apartments, hoistways had been present which could have been used to lift inventory up to the lofts.

Henry L. Meyer, a liquor merchant, purchased the building and stores from Harriet Onderdonk in 1883 and immediately converted the corner store into a bar to add to the two he already owned on Front Street and Pearl Street. The spectacular original polished wood bar with its sparkling mirrors survived Hurricane Sandy and you can still enjoy a drink there today. It wasn’t until 1903 when Meyer converted the upper floors to include offices on the second floor, and forty-one hotel rooms, nine on the third floor and sixteen each on the fourth and fifth floors, that the building became known as Meyer’s Hotel. 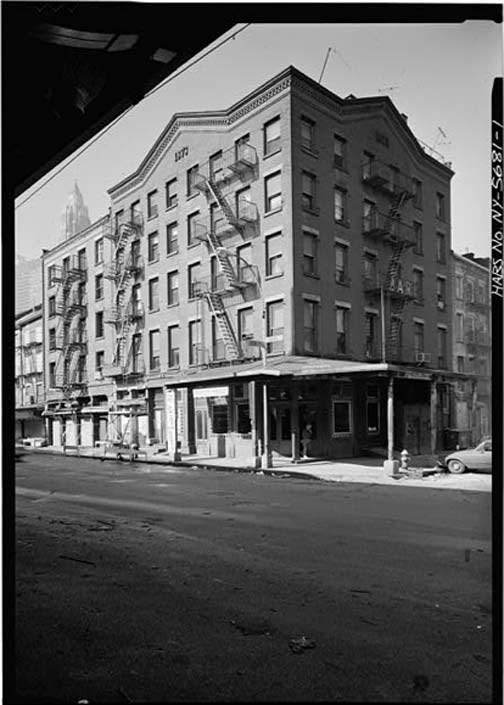 At some point his bar expanded and became known as Meyer’s Restaurant. Famous guests reputed to have stayed at Meyer’s Hotel include Thomas Edison, Annie Oakley and Buffalo Bill Cody, and outlaws Butch Cassidy and the Sundance Kid. Teddy Roosevelt was known to drop in at the bar on occasion for a pint while serving as the head of the New York City Police Department, supposedly looking for officers who indulged themselves while on duty. 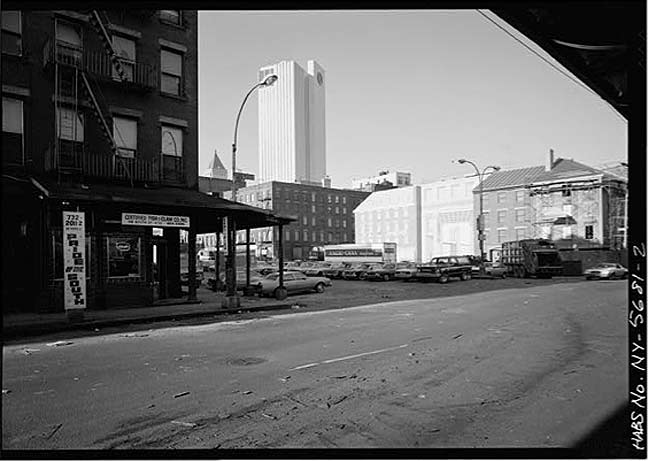 In 1951, the building/hotel was purchased by Silvio (Steve) Schiaffino and his South Front Realty Corp. from the estate of Henriette Meyers. He made extensive renovations to the hotel, including the addition of bathrooms on the first, third, fourth and fifth floors, installation of a sprinkler system, and repair of the fire escapes. In 1952 he purchased Meyer’s Restaurant and after renovating the kitchen and dining area renamed it the Paris Bar and Restaurant, after his original Paris which opened in 1934 at 164 South Street, but was taken by the City of New York under eminent domain around 1950. Today, its name is carried on by the Paris Café, and remains one of NYC’s oldest restaurants. 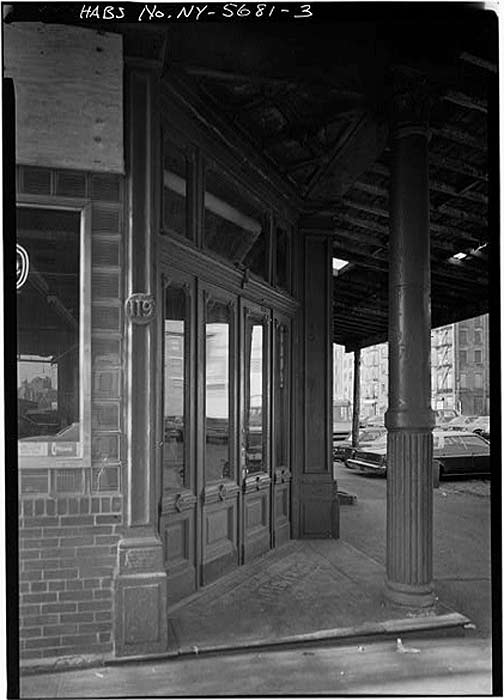 The diagonal corner entrance we see today with its signature beveled, etched and frosted glass paneled doors was not original to the building, and was likely added either in 1883 when Meyer opened his bar, or in 1903 when the conversion to a hotel took place. Also, the canopy that shelters the corner entrance was added some years after the original construction. The current owner purchased the building in the early 1980’s from Mr. Schiaffino and converted the top four floors into twenty-eight apartments with seven per floor. Occupancy began in 1985.

It is located at at South Street and Peck Slip, not Pike Slip. ; )

This gorgeous old slice of NYC is actually at South Street and Peck Slip (which is often confused with Pike Slip about a half-mile north near the Manhattan Bridge).

Nice old school medium format negs. The lead is reminiscent of Berenice Abbott’s WPA work but the car dates it to 1970 ish. The completed AT&T longlines building date them as no earlier than 1974.

Either date is in line with the completed Long Lines building and the general age of autos and deterioration of the area.

My old friend Jerry (Captain Jeremiah Driscoll) lived and died there back when it was a mens’ only hotel. I sailed with him many times on his tanker Sterling in the seventies.

I was the hotel ‘manager’ from the late 1970’s to 1980. Captain Jeremiah Timothy Driscoll always appreciated the Meyer’s Hotel, for he was taken in when he was semi-down on his luck due to the Circle Line fiasco. When the building was being sold and residents were requested to leave, he left without taking a buyout offer: he felt that was the only honorable thing to do. He didn’t die in the hotel; he moved to the Excelsior Power House apartments at Fulton and Gold Streets.

JIm, sorry I don’t remember you, but Steve was my grandfather and Big Joe was my dad. I worked in the fish market summer of 76 and 78. Lots of great memories of the area there. I met Capt. Driscoll once. If I recall correctly, most of the residents of the hotel were retired seamen. My dad wanted to keep the business in the family but for some reason my grandmother insisted my grandfather sell everything. Too bad. I might even have wound up there. I was last in the area three years ago. It’s turning into a residential area. The old post office I think is a school now. Peter O’Connell, the owner of the Paris Café is a great guy. I wish him lots of success.

as far as i can recollect old posst office is some kind of school maybe a flr even added and of course area just like many areas from years ago i e walls street etc are from commercial/business to residential some bordering on disney world ststue i e times square. worked in area for many years and know it pretty well has lost its flavor with fish mkt to the bx njnor closed up. i am sightseer evn though born and raised ny er but wehreever i worked got into what area history was and is.

i know the circle line but what is this fiasco mentioned and what were/are the excelsior power hous apartments? as in my other comment responses on here it born nyc and life long res of nycer but!for all my touring history wanting to find out about nyc stuff past and present thrse 2 items escape my knowledge!

The ground-floor restaurant has great food.