One ShotsYou'd Never Believe You're in NYC

Thorwald Heyerdahl built his stone house atop this hill in 1861-62 when he signed a five year lease indenture with property owner George Byron. In 1866, Heyerdahl purchased the nine acre property for $4,800. In 1871, he purchased two adjacent pieces of land, one 3 ½ acres and the other a little over an acre to give him access to Rockland Avenue.

Heyerdahl planted grapevines and an orchard in an attempt to establish a vineyard. Unfortunately his plans were foiled by the soil which was high in magnesium from the underlying serpentine rock and is not tolerated well by most plants. 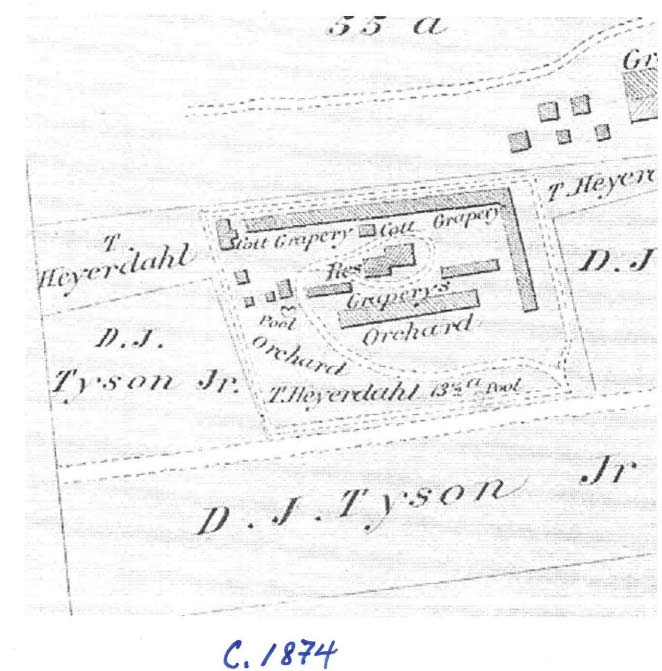 This 1874 Beers Map shows how much work Heyerdahl put into his dream. You see graperies, orchards, a residence and cottages. There are at least two wells on the property as well as two man-made ponds. Unfortunately, Mr. Heyerdahl died sometime between 1871 and 1875 and left the property to his widow Caroline. The New York State Census for 1875 under Richmond County, Northfield E.D. 02, page 10, line 38, has the following information for House #95: made of stone, value not listed, owner C.S. Heyerdahl, female, 43 years of age, born in Rhode Island, currently widowed.

Heyerdahl’s widow Caroline at some point remarried and became Caroline von La Roche and it was she who disposed of the 13 ½ acre property. The 1917 Beers Map identifies Eugene Graf as the owner of the nine acre piece of this property. The rectangular piece was owned by someone else by then.

In 1928 the City of New York took over all the property along this section of Rockland Avenue including Heyerdahl Hill as part of its purchase of the 560 acre Latourette Park.

Hi, Kevin, thanks for Return to Heyerdahl Hill, one of many fascinating places I never discovered in 25 years of living on Staten Island. Thanks for preserving history. By the way, I remember your Neighborhoods series of the other four boroughs, but didn’t remember seeing that done for Staten Island yet?

At first I thought it might be Thor Heyerdahl, the author of “Kon-Tiki”! (lol)

Attention Web master:
I used to live at 127 E. 34th Street in the Murray Hill section of Manhattan. I believe this brownstone building was built as a single family home in about 1856. Back then it had an outside staircase going from the street level to the first floor. Records show that the building was turned into a multiple dwelling in 1910. Can you find out exactly when this building was built and by whom?
Respectfully:
Norman Sinowitz

In the early 60s, guys from Todt Hill projects neighborhood, (THU,Todt Hill university) used to ride horses from Silver Star Stables on a trail right past those steps. Enjoying The Island when it was still country and woods.