As you can see in the title card, there’s a twin, or double-masted, hexagonal pole on 37th Avenue west of 114th Street, illuminating the sidewalk at Hinton Park, which extends from 34th Avenue one block to 37th Avenue and from 113th to 114th Streets. Of course, most people would ignore this anomaly and pass it by without giving it a second thought. But I’m not most people.

When I moved to Flushing in 1993, I bicycled all over eastern Queens and would make frequent forays into Corona west of Flushing Meadows-Corona Park. And, even before that, I’d sometimes make it all the way here from Bay Ridge on long bike trips.

And, I can state with 100% veracity that this double-mast is here because it lit a short branch of 37th Avenue that ended at 114th Street called Pell Avenue. I had found it on those early bike rides. In fact, when Hinton Park was extended south to 37th Avenue in 1999, it nearly completely absorbed Pell Avenue. The key word is “nearly.” 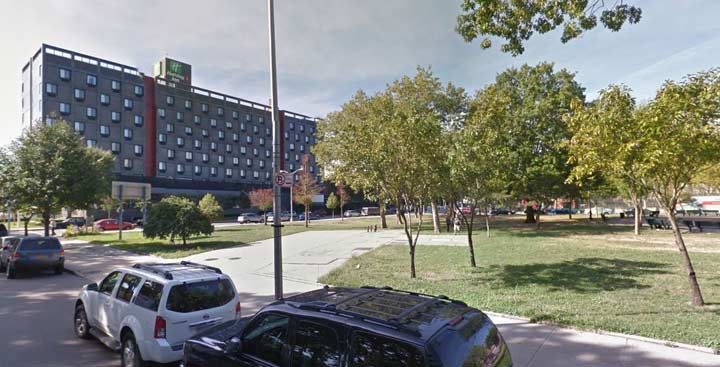 Here’s a view from 114th Street looking southwest toward 37th avenue at Hinton Park. You can see a short piece of concrete park path that comes to a stop at one of the trees. That’s what’s left of Pell Avenue. 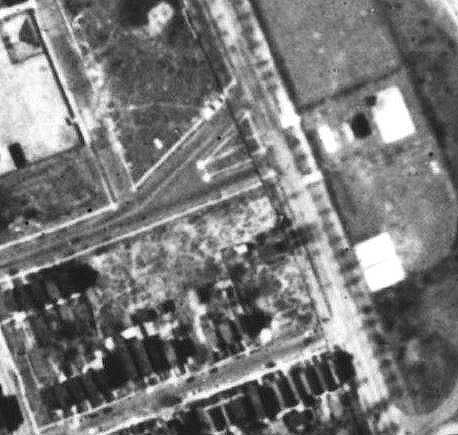 An aerial view of Pell Avenue from the mid-1940s… 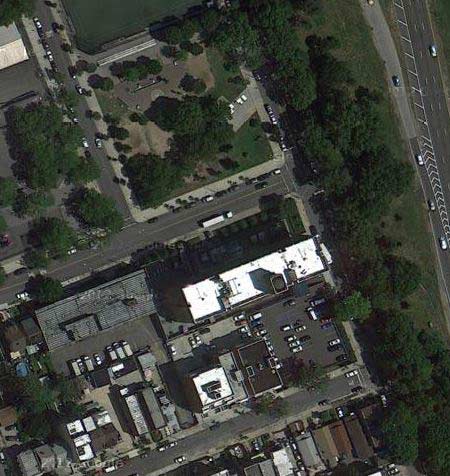 … and a more recent aerial, showing the stub end.

So, what do we have here… why did Pell Avenue even exist? It’s a very short section of what was once a much longer road.

This is a 1909 map of northern Corona and what would be the Grand Central Parkway and northern Flushing Meadows Park. There’s a lengthy east-west road called Flushing Turnpike (some maps also called it Newtown and Flushing Turnpike). It connected Elmhurst Avenue to Jackson Avenue, or today’s Northern Boulevard. On this map, it’s likely that the cross streets on the right side were mapped only, as these would be the ash heaps that F. Scott Fitzgerald referred to in “The Great Gatsby” in the early 1920s. 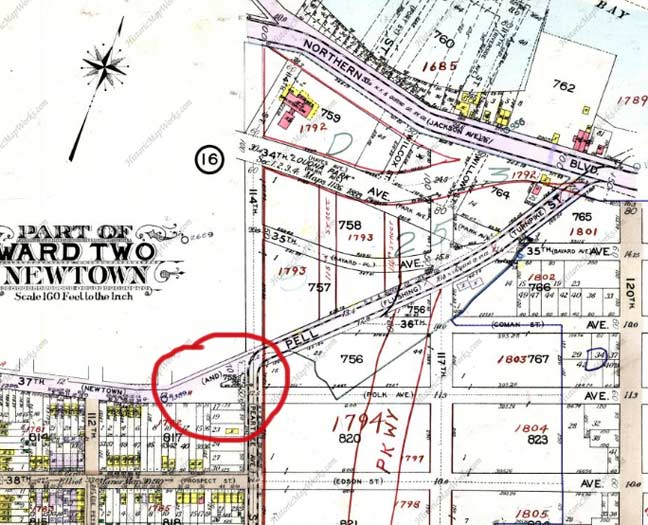 This is a Belcher Hyde atlas plate from 1927, showing that by then, the Flushing Turnpike was known as 37th Avenue and the section of the turnpike running from 37th Avenue northeast to Northern Boulevard/Jackson Avenue was named Pell Street.

Thus, only that little notch of Pell Street between 37th Avenue and 114th Street was able to survive, as Pell Avenue. However, the Flushing Turnpike still exists as 37th Avenue. This is evident in the somewhat curved path the roadway takes from Elmhurst Avenue east to 114th Street.

Why was it called Pell Avenue? The answer lies in the Bronx, of all places. Thomas Pell had purchased a huge amount of territory from the Siwanoy Indians in 1652 and built a mansion that still stands in Pelham Bay Park. The town of Pelham in Westchester County is named for him. Thomas’ son John inherited the manor and his daughter Mary married a Samuel Rodman, who owned a great deal of property in Flushing. Unfortunately, both Pell Avenue in Corona and Rodman Street in Flushing have disappeared, either through demapping or renaming.

So the next time you see a clue that a street was once where you thought it was… you’re probably right.

This is a fascinating tidbit of information on a street I was never aware existed (Pell Avenue), and that the only trace of it exists in its original right of way as a short stub, which appears to been converted into a parking lot at Hinton Park in Corona. Growing up in northeastern Queens, I never really had a reason to venture west of Flushing Meadows Park (into Corona), except for forays made to Rego Park, Forest Hills and Kew Gardens, and this was mostly by auto or a combination of buses, subways, and walking. I do however remember Rodman Street in the Queensboro Hill neighborhood of Flushing. I believe historically Rodman Street was called Ireland Mill Road (as it transitioned from Strong’s Causeway (the Long Island Expwy.) and transitioned into Lawrence Street (College Point Blvd.) as it intersected with North Hempstead Turnpike ( Booth Memorial Avenue). This can be seen on a 1909 G.W. Bromley Atlas of Queens. Today Rodman St. is but a pittance of its former length; What today is a small two block long street (between the Long Island Expwy and 59th Avenue/College Point Boulevard), was once a six block long street which College Point Boulevard has assumed the remaining four blocks of Rodman Streets former length.

These street necrology articles are my favorite posts on FNY. Fascinating. Thanks again Kevin for an amazing job.

“Here’s a view from 114th Street looking southwest toward 37th avenue at Hinton Park. You can see a short piece of concrete park path that comes to a stop at one of the trees. That’s what’s left of Pell Avenue.”

That patch of concrete is the 37 Ave. NYC DEP Sewage pump station.

The original Thomas Pell Manor House was likely destroyed during the Revolutionary War. Several other Pell family houses were razed to make room for Pelham Bay Park. I visited the Bartow-Pell Mansion Museum yesterday. It was built ca. 1842 by Robert Bartow, grandson of John Bartow, who was married to Ann Pell.