Perfect weather returned for ForgottenTour #85 in Manhattan’s Lower East Side on October 19th, 2014. I perhaps overpacked the tour with highlights — 60 in all — so I had to leave some of them off the tour as we passed our 3-hour time limit. They will be used the next time a Forgotten NY tour passes through the area.

The Lower East Side of Manhattan, roughly defined by East Houston Street on the north, the East River on the east and south, and by the Manhattan Bridge and the Bowery on the west, is known in story and song as a teeming, bustling magnet for immigrants in the 19th and 20th Centuries. In the 17th and early 18th centuries, it was primarily countryside and farmland; it attracted ship captains and wealthy landowners such as Rutgers and Delancey, whose names still are prominent on local street signs. George Washington had a mansion at #3 Cherry Street, in a site now serving as an anchorage for the Brooklyn Bridge. In subsequent decades came immigrants: first the Irish, escaping the potato famine of the 1840s and British repression in the 1860s, then the Germans in such numbers that the area became known as Kleindeutschland (“little Germany”), and later Eastern Europeans, many of them Jewish, escaping persecution in their homelands. New populations of Latinos and Chinese have arrived in subsequent decades.

The tenement, as in other parts of New York City, was the dominant form of housing with hundreds of people occupying rooms in the same building. Crowding, freezing cold in winter, and stifling heat in summer were the norm. Reform came only slowly, with the construction of major housing projects in the mid-20th Century.

Today, the Lower East Side is still attracting immigrants from the world over, and theatres, rock clubs and restaurants have added to the Orchard Street crowds in search of bargains. Luxury condos have begun to spring up, despite community protest. 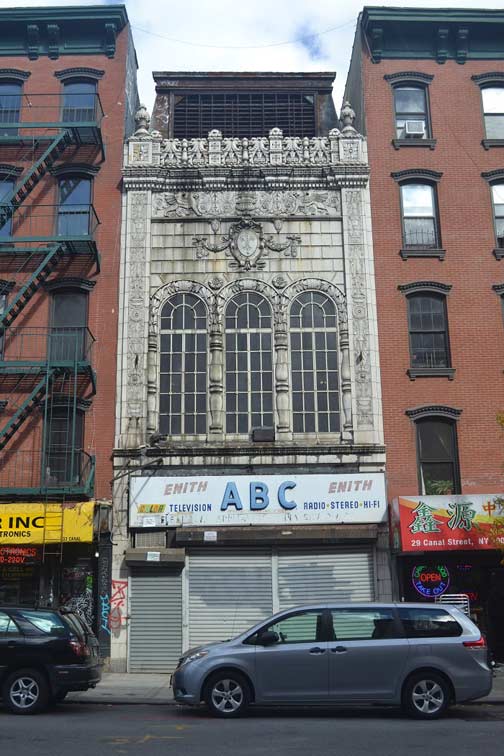 The Loew’s Canal Street Theater at Canal Street just west of essex, a 3-story theater built by prolific theater designer Thomas Lamb and completed in 1927, had a seating capacity of 2,270. The façade is faced in glazed white terra cotta, richly decorated with masks, wreaths, griffins and other classical ornamentation. Triple-arched faux windows, glazed in black and framed with urns and foliage, are surmounted by an elaborate cornice.   –(Lower East Side Remembered & Revisited)

On April 17, 1940 large crowds turned up for the opening of “Forty Little Mothers” starring Eddie Cantor, who was born a few blocks away on Eldridge Street.

The theater closed in the 1960s and the interior was gutted. For several years an electronics store occupied the space and the old sign is still on the exterior. 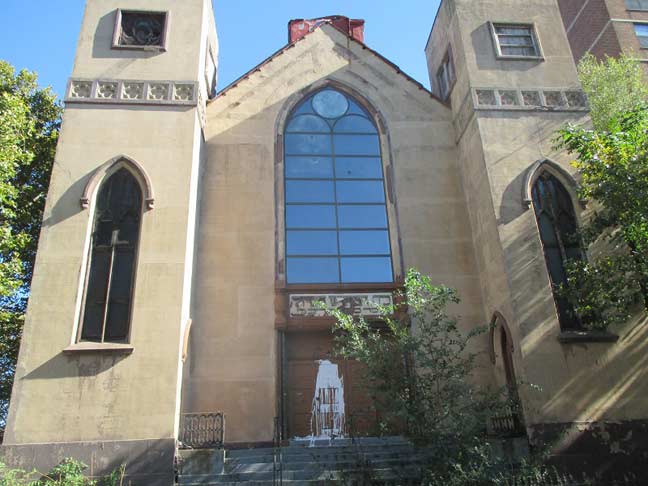 A Methodist church occupied the building from 1860 to 1885, when it was purchased by Congregation Beth Hamedrash Hagedol and refitted as a synagogue. Unoccupied at present, it is a designated NYC Landmark. Its Gothic Revival façade features a tall pointed arch window above the main entrance surmounted by a pedimented roof with a Star of David at the top. Flanking the central section are two square towers with narrow windows.

The interior is painted with a sky-blue ceiling and colorful Biblical scenes. 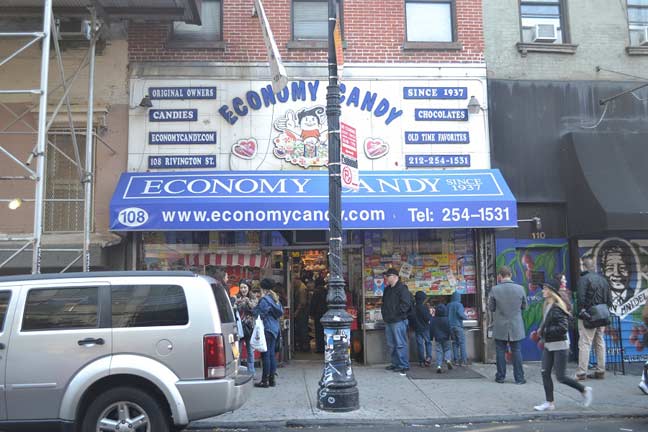 Economy Candy at 108, just west of Essex, has been there since 1937 and has been owned and operated by the Cohen family since the beginning, in this location since 1985. The smallish, cramped store is a wonderworld for candy aficionadoes, with all the well known brands and others from around the globe you have never heard of. I am here a couple of times a year to stock up on candy fruit slices and chocolate covered pretzels. (It’s only my superhuman resistance level that keeps me from going in more often.)

Looking for pictures of Delancey and Pitt from 1926 to 1932. Anyone have any showing this location during those times?