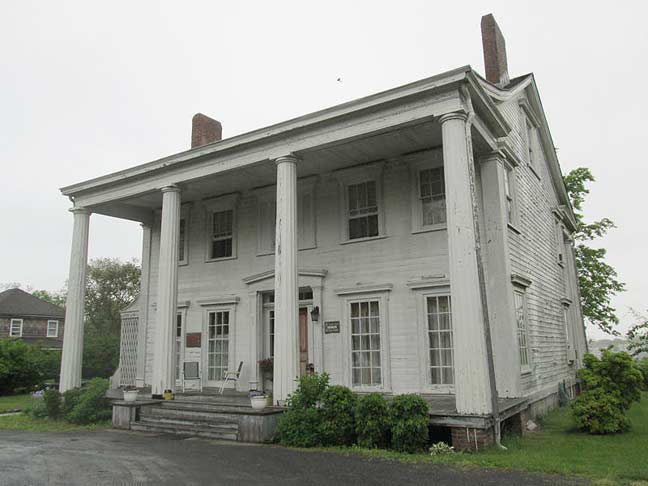 Captain Henry Hogg Biddle’s grand mansion at 70 Satterlee Street was built on the water’s edge between 1840-1845 in a Dutch Colonial style with unusual two-story porticoes. At the time, Biddle operated the ferry between Tottenville and Perth Amboy, NJ (the ferry was in operation until 1963). Note that the front and back of the house are designed the same, with four large Doric columns.

The house is now owned by NYC and is part of Conference House Park. Biddle’s grove, a summer resort on the northern part of Biddle’s Farm, was established in the early 1850s.

Note that the front and back of the house are designed the same, with four large Doric columns.

What is more amazing, after examining both photos, is that the architect was able to exactly reproduce every single detail found in the front, down to the location and shape of the shrubs, the folding chairs on the porch, peeling paint on the sides and even an exact copy of the house in the background. Sorta like looking at an M.C. Escher drawing. Truly a testament to paying attention to detail. 😉

This house stood in for Louis Gossett, Jr’s Harve de Grace, Maryland farmhouse in a few episodes of last season’s “Boardwalk Empire.” I recognized the front porch, and knew that Staten Island was used quite extensively in “Empire” filming over the past few seasons.

I have been forced to show 2 photos that are the same on my “One Shots” pages because with the WordPress I’m using, mobile devices won’t show the photos unless I do that. I’m going to try another workaround.

I’d say it is mainly Greek Revival, except for the Dutch-Colonial way the slope of the roof changes and incorporates the porches.

I visited Biddle house yesterday and unexpectedly saw a very old and beautiful mezuzah on the front door post. Can you tell me who owned Biddle House after the Biddle family passed away? Thank you.

I know at one time in the 50’s and 60’s it was owned by the Peterson Family. I recall delivering the Staten Island Advance newspaper their, along with a myriad of other neighbors .

I lived at the time near the Point at what was then 10 Mc Donald Ct.

Note , our home and others were torn down later due to changing the area into the Conference House Park . My family , including my grand parents , mother and her siblings resides inside what is now the Park . I also grew up at 20 Mc Donald Ct.

Yes, my father, and 2 siblings grew up in this house. Petersen is the correct spelling of their name. I remember such fun times coming to my grandparents big house as a child. And watching the fireworks on the water. This home also used to have a, don’t know the spelling for a glass enclosed walk about on the roof……widows walk……my dad said he used it to sleep in in the spring and fall when the weather was good.