Of the many bridges that cross the noxious and noisome Newtown Creek, which includes the Pulaski (McGuiness Boulevard), J.J. Byrne (Greenpoint Avenue) Kosciuszko (Brooklyn-Queens Expressway), the Metropolitan Avenue bridge, and the late lamented Penny Bridge, my favorite is the rattling Grand Street Bridge, which connects outlandishly remote sections of Brooklyn and Queens, two neighborhoods in East Williamsburg and western Maspeth you wouldn’t visit unless you worked there. Or unless you are me.

The reason for my preference is simple. While the other Newtown Creek bridges are relatively bland products of the mid-to-late 20th Century and are quite boring in aspect the Grand Street Bridge is a 1900 swing bridge that looks like something you would put together with an erector set when you were a kid. 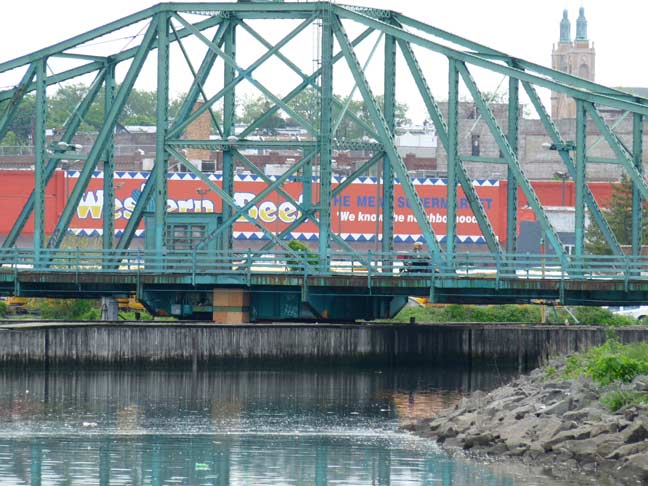 It is hard to choose what the best approach to the bridge is, esthetically speaking. You can approach by boat, as here. The twin spires of St. Aloysius Church, the tallest building in Ridgewood, are seen at right and can be seen from as far away as Sunnyside and Greenpoint. 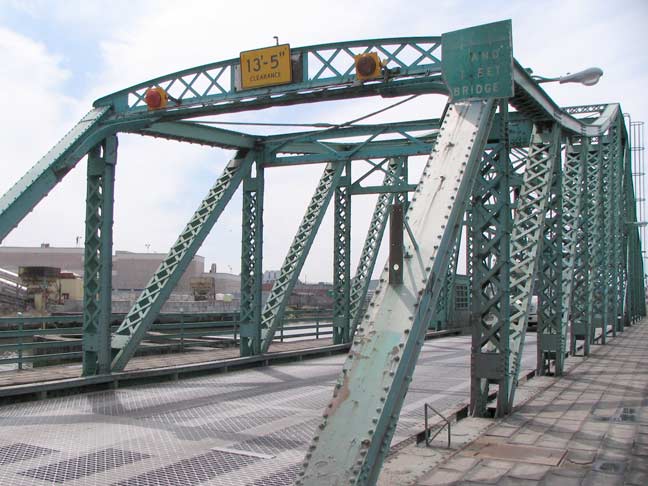 But walking is the best way to cross it. You can hear the bmmmmmmm of the cars and trucks as they run fastly and furiously on the metallic-grated roadway, and feel the bridge moving up and down when an especially large truck rumbles over. You tread the thin slate sidewalk, likely not replaced since 1900, and stick the camera over the fence, knowing if you dropped it into the creek, it would begin to dissolve immediately. 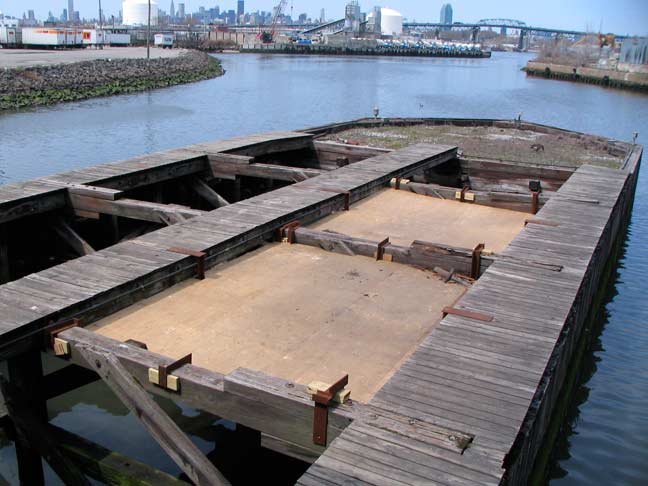 The Grand Street Bridge can swing 90 degrees to allow shipping on the creek to pass. 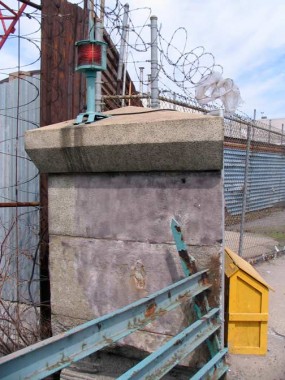 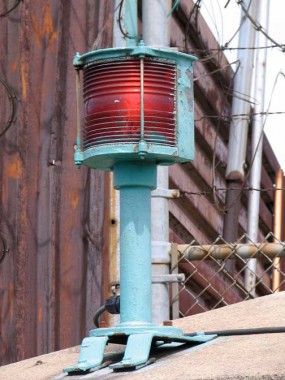 When necessary, traffic is given ample warning in the form of flashing lights positioned on both ends of the bridge and on the superstructure, while gates swing around to block traffic on both ends of the bridge. The Brooklyn-Queens line is in the center of the creek (which holds for the creek’s entire length).  Occasionally the bridge will be left open for maintenance for an entire weekend, in which case traffic usually is diverted to the Metropolitan Avenue Newtown Creek bridge a short distance south. 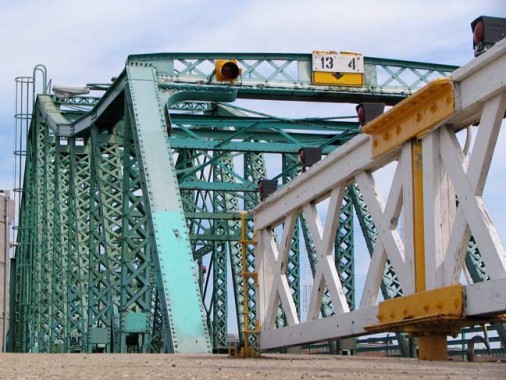 The bridge passed its centennial with little fanfare in 2002 (it was opened in December 1902 or February 1903, depending on what source you use) and as old as it is, two previous bridges bridged the Newtown before it. The first, constructed in 1875, became dilapidated and un-maintenanced (in a  typical NYC and Brooklyn story) and was replaced in 1890, but was declared by the US War Department (now the Department of Defense) as a threat to navigation. Plans for a new bridge, the present one, were drawn up in 1898.

Grand Street and Grand Avenue, as the road is known in Queens, together are about 120 years old. Grand Avenue was engineered in the late 19th Century as an eastern extension of Williamsburg’s Grand Street, and was known as a Street in the early years of its existence before the Queens section became an Avenue, likely to differentiate it from Brooklyn. In Queens, the road’s eastern course overlapped the course of the Newtown Plank Road, which is today’s Maspeth Avenue as far as its eastern junction with Grand and Flushing Avenues. (Flushing Avenue itself is a straightened version of a colonial-era route called the Brooklyn and Newtown Turnpike.) 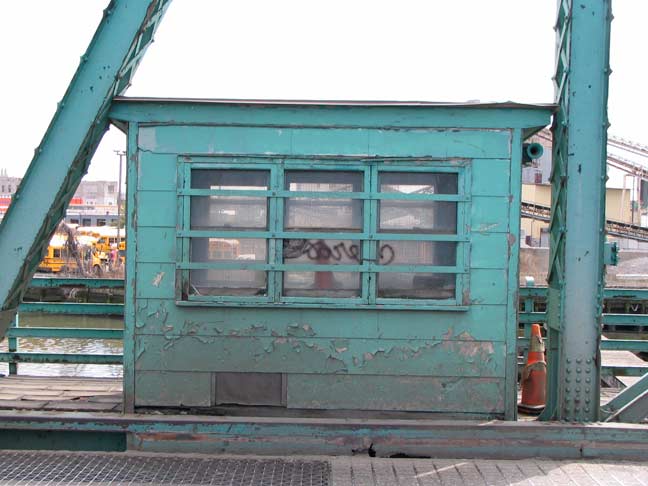 A shack used for bridge maintenance is still standing on the south side of the bridge. 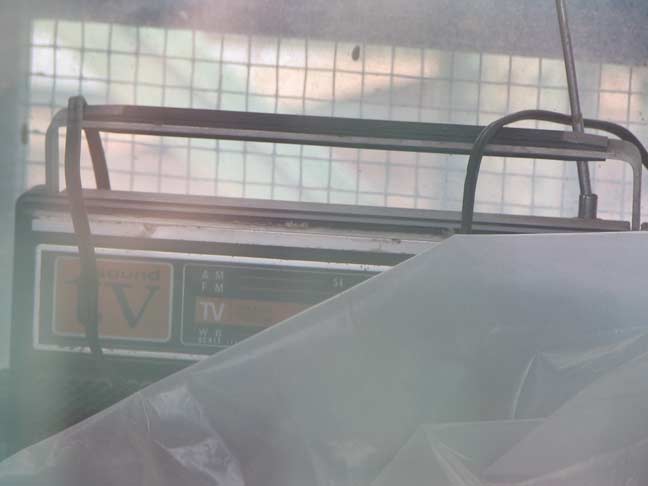 Looking through the dust- and graffiti- decorated glass, I discovered one of those battery-powered radios that also got TV reception. The last time I saw one of these in action in the Super Seventies,  a lady at a lunch counter was using one to keep abreast of a soap opera story.

I imagine Radio Shack still carries them, but as far as Shacks are concerned, Shake Shack is now clearly outdistancing Radio Shack. 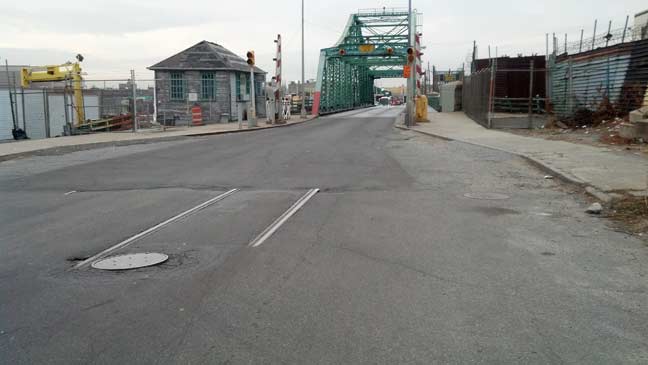 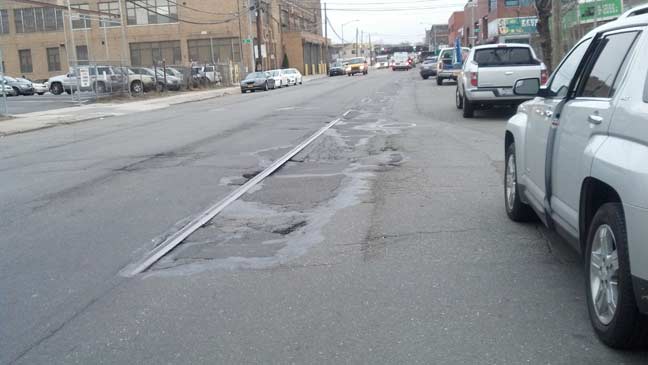 In trolley news, Gary Fonville sends over a couple of photos of lengthy sections of uncovered track on both sides of the bridge. The #59 trolley route plied Grand Avenue until December 12th, 1949. It’s been replaced by the Q59 bus, which runs from Kent Avenue in Williamsburg to Queens Boulevard near Queens Center in Rego Park.

” two neighborhoods … you wouldn’t visit unless you worked there. Or unless you are me.”

I love it, Mr. Walsh! Thank you for so many wonderful journeys!

Perhaps soon the migrating hipsters can start selling kale shakes from the control shack on this bridge!

I note several draw-bridges over this body of “water” (e.g., Greenpoint Ave.), but do you know if there is today any appreciable commercial (or otherwise) boat traffic on Newtown Creek? Asked another way: Is there any reason for these bridges to retain their mobility?

And speaking of “water,” try not to shudder at this excerpt from the Newtown Creek entry on Wikipedia:
“when it rains … raw sewage and street run-off, which includes everything from condoms to dead rats, pours into the creek from 23 different locations.”

Does anybody remember the A& P warehouse that stood on the north side of Grand Ave. on the Queens side? Across the street on the Queens side of the creek was the
Bklyn. Navy Yard Annex. I remember watching the sailors removing the deck guns off of old World War 2 destroyers prior to being scrapped.