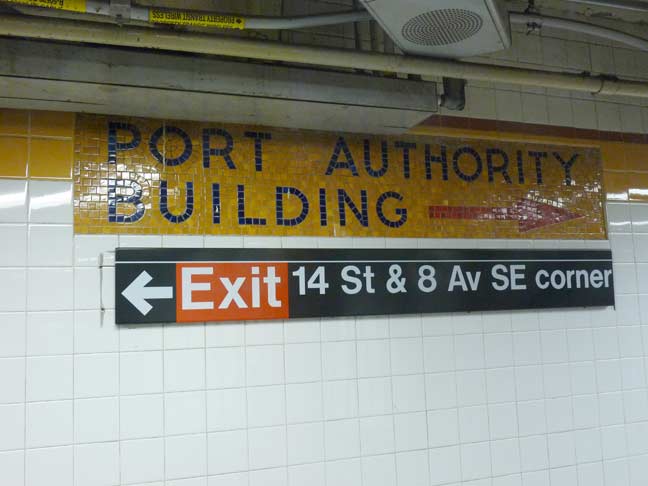 Just outside the turnstiles in the concourse of the 14th Street station on the IND 8th Avenue line (A, C, E trains) there’s a handsomely lettered sign in the black and gold signage that marks the rest of the station, with the addition of a red arrow. It points to the Port Authority Building (111 8th Avenue) which is no longer occupied by the agency. 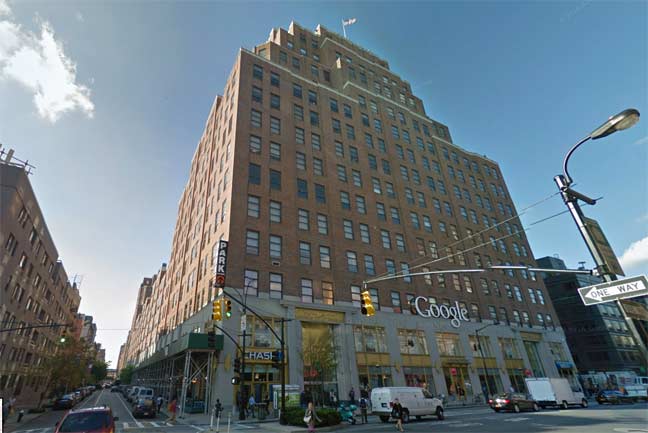 111 8th avenue is one of the few NYC buildings that take up an entire square block: between 8th and 9th Avenue and West 15th and 16th Streets. It’s an Art Moderne classic constructed in 1932 and designed by Lusby Simpson of Abbott, Merkt & Co. as the Port Authority Commerce Building.  It was a multi-use building designed to be used as a trucking terminal and also to handle exhibitions and manufacturing.

At its peak in the 1930s the Port Authority serviced 8000 tons of goods in the building and as many as 650 trucks passed into the building daily. The building has 15 floors the size of football fields.

As less shipping took place on the Manhattan side of the Hudson River the building lessened in importance, but it did serve as Port Authority headquarters from 1947 to 1980.  For about a decade beginning in 1998 Taconic Investment Partners owned the building and used it as a data center during the internet boom.

In 2010 the building was acquired by internet giant Google, which installed large white logos on the 8th and 9th Avenue sides. However, Art Deco details in gold finish at the building’s entrances have remained intact.

Small correction. I believe that the former Port Authority building is between 15th and 16th Streets. I often use the Chase ATM that you can see in the photo and it definitely is on the NW corner of 15th St.and 8th Ave. I also remember seeing the mosaic on my way out of either the 15th or 16th Street exit.

I was in the Port of NY Authority (as it was then called) building in spring 1968, on a 6th grade class trip to learn about The World Trade Center. We all rode upstairs in one of the truck elevators – we were three 6th grade classes with teachers and 2 “Classmothers” per class, around 80-90 people (though I’m foggy if we rode up in 1, 2 or 3 groups. After walking down a long corridor, we entered a large room which was painted/curtained flat black. There was a large model of the WTC complex on display – it had to be 10 feet tall, illuminated by stage lighting on overhead tracks. We learned all about the WTC and then the special prize drawing was held – 1 winner from each class would get a helicopter ride from the rooftop helipad. I didn’t win one of the prized spots, BUT they allowed a small group of nerds with cameras to go up to the helipad to take pictures. I can still remember climbing up that metal staircase on the side of the the west penthouse/turret – 1/2 of each step tread was filled with asphalt, the other 1/2 was open grid tread. It was windy as all hell up there. I got pix of the chopper and it taking off. Going up and down those steps was the scariest thing I had done in my life at that point. Those stairs are still visible on google earth on the SW corner of the building, 15th st side. When I was there, none of the HVAC or other stuff visible today was there.

I used to work in that building on the 9th ave side! In the brisk cold winters I used to take the elevator to the 9th floor where there was a long corridor that one could walk across the building west/east so they wont have to wear a coat just to get in the subway.

I worked for GE Wire and Cable Dept. in the 1960’s which was in this building.

I worked in that building from 1966 – 1968. I was assigned to the Law Department. At times I chauffeured as many as 3 (TOP) lawyers to various establishments down town that needed to be “RELOCATED” so the Twin Towers could be built. We also went to NJ. I’m thinking owner’s lived there. It was pretty cool for an 18-19 year old kid who flew by helicopter from the top of the building to Kennedy Airport, met by Port Authority Police and driven to an awaiting airplane!! I spent the night in a Hotel upstate, Albany, just to deliver law books and Briefs!
I remember the Barbershop, shoe shine shop on the main floor. I remember a man, I can still see his face, that operated the elevator. They were controlled by hand. After becoming friends with him I was given the EXPRESS ride to the top floor! I would have been in one of the TOWERS had I not been drafted! There were no promotions if you were classified 1-A by the draft board. I went to the draft board and “BOOSTED MY DRAFT” told them they were holding up my plans for marriage and promotions. TAKE ME KNOW, two weeks later I was gone. 2 years later I returned to Staten Island and drove to the Ferry Terminal (35min) boarded the Ferry to the City (35 to 45 min, depending on what boat you got) went to the train station for uptown(15-20min) saw the same people doing the same routine. Visited with my old boss- just not how it was before. Went to CALIFORNIA to visit an Army buddy and stayed 50 yrs!! I was devastated when I saw the live news of the Towers under attack I new the minute that 2nd plane hit it was intentional!! I was amazed at first then became very angry! I began to pray for the folks inside the buildings! After I was able to get my composure I realized that I would have been inside having a hard boiled egg and coffee with my friend Eugene! My emotions were all over the place!! I am sad for the folks and their families who were not as fortunate as me! I truly thank God for keeping me around! I will be 72 next week (26th).