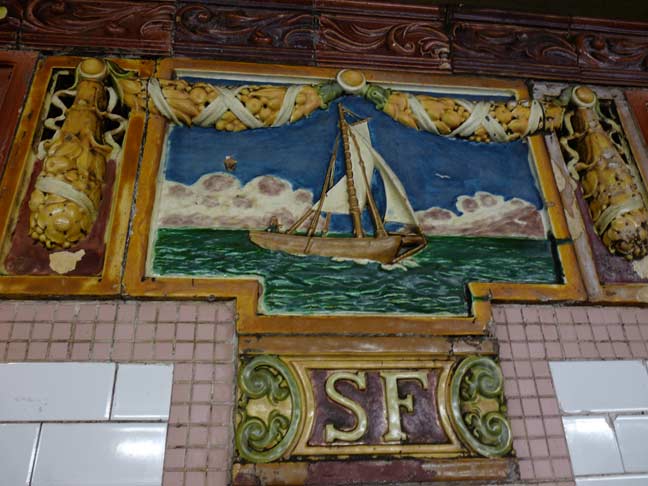 The South Ferry station at the tip of Manhattan is a very complex operation that now comprises no less than four separate platforms that serve, or served, the IRT 7th Avenue Line (#1) and the IRT Lexington Avenue line (#4, 5). There are inner and outer loops that direct trains to each line; platforms that served a shuttle from the Lexington to the 7th Avenue, as well as a station dedicated to the Lexington Avenue line, have both closed, as service ended from the Lex in 1977.

In addition, a new South Ferry station was built for the 7th Avenue Line that was on a straight stretch of track, allowing for “normal” train passage in and out instead of needing to use the loop. The old loop platform, opened in 1908, can only accommodate 5 cars of a 10-car unit; in addition, a mechanical sliding platform is needed so that there’s not too large of a gap, which it’s always safe to mind.

The new station was mostly pure white, with white walls and bland-ish artwork (some of it can be seen at the end of this FNY page from 2009). It was much more convenient for passengers and train crews alike. Unfortunately no provisions were made for a large rush of water (as with most NYC subway stations) and Hurricane Sandy, October 29, 2012, mostly trashed it and the multimillions spent on it. Thus, it was back to the drawing board for a replacement station, but there was also a reprieve for the 1908-vintage original “outer loop” station and its Beaux Arts artwork, desribed at length on this FNY page from 2008, when I assumed the old station would be closed forever.

The Sandy tragedy did allow the old bird to be spruced up. Somewhere along the way, the gorgeous terra cotta plaques depicting a sailboat had gotten drenched with brown paint (or gilt that had attained a brown patina), but as part of the old ferry loop station renovation, the plaques were returned to their original coloration, or close to it. The connection to the R train instituted for the new station in 2009 was retained.

In your webmaster’s humble opinion, the quirky, yet handsome Beaux Arts South ferry station should be retained as is and money going into yet another replacement station should be spent elsewhere, but I don’t make those decisions!

I once asked a friend and fountain of immense train knowledge about the loop vs. two track terminal design and it was shocking.The connection the ferry is much better at the new station as it is closer to the ferry and provides a connection to the BMT station. The loop takes longer to unload and load passengers as you have the inevitable delays due to ignorance and desperation as people ignore than constant warnings about the short platform length which causes constant problems along the entire length of the line. These delays are a strong reason why loops are not used anymore in transit system designs..

Bland as it is, as a train station the new one was built to maximize on rail connections, operations, and ease of use for passengers. The station could get new artwork and coloring to make it look nicer but that is something else entirely.

Hi Kevin –
I don’t believe there was ever a shuttle from the Lex to the 7th Av line. I think you may be confusing it with the Bowling Green (Lex) – South Ferry Shuttle. In the 70s it used modified R-12 cars so that only certain doors opened – those which lined up with the openings in the wall on the South Ferry Inner Loop. The 7th Av line can only access the outer loop station, but can switch to the inner loop track to reach the Lex. The Lex connects to both loop stations and can switch the 7th Av line (Lex bound trains take the switch mentioned above if on the outer loop).
– Jeff

Right. When the BG-SF shuttle ran (most of the day on weekdays), there was no transfer between it and the #1 train. When #5 trains (weekends) or #6 trains (late nights) ran to South Ferry, they stopped at the same platform as the #1, and a transfer was possible.

BTW, that plaque with the sailboat looks absolutely beautiful.

It isn’t often that we get to use a piece of historic infrastructure that had previously been shut off from us forever. I wrote about this in my blog way back in March, 2013. (A link to the story is above). On my most recent trip to NYC I made a point of taking the #1 all the way to South Ferry just to experience and photograph it one more (and perhaps the last) time. It was a joy to hear those old announcements to move to the first five cars – it just added to the throwback experience of it all.

Regardless of the historic qualities and quirks of the old South Ferry, the reasons for building the replacement station still remain and, undoubtedly, before long the #1 train will again end its run at the drably efficient new South Ferry.

Thanks I really enjoyed this one. Growing up on Staten Island I am very familiar with this station. I can remember the announcement to move up to the front cars to disembark and I remember the sliding platform. I am trying to remember if this was the station that had the wooden escalator.
Many thanks for this post, and yes, that plaque is beautiful.