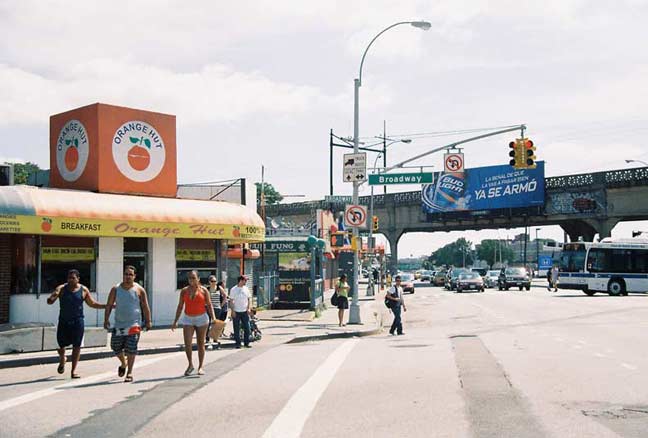 Commuter and intercity rail connecting NYC and New England has run over these elevated tracks at Northern Boulevard and Broadway since the Hell Gate Bridge was constructed in 1916-1917. Here the line has just emerged from the Sunnyside Yards and the tunnel to Penn Station. It will soon join with the NY Connecting Railroad at 25th Avenue and cross the bridge across Randalls Island and into the Bronx. The supporting columns here were clad with concrete when it was built — but the concrete is now crumbling off.

The trestle is part of one of the most amazing transportation projects ever built: the tunneling of the Hudson River; the construction of the cavernous original Penn Station, bulldozed from 1963-1966; and the Hell Gate Bridge, completed in 1916, a relative golden age of railroading in NYC.

In the early 1920s a series of “White” themed fast food restaurants began to pop up all over the country. There was White Castle — still going strong and, in fact, the one at Northern and Bell Boulevards a few miles to the east is in one of the original locations. (I like the fare, but it tends to give your webmaster the repeats). There are the White Manna and White Mana hamburger shacks in Jersey City and Hackensack. In the early 2010, hamburgers are bigger then ever with Five Guys and Shake Shacks popping up like weeds all over the metropolitan area. Then, there was White Tower…

The Orange Hut at Broadway and 54th Street still carries the outlines and contours of its former life as a White Tower hamburger chain restaurant. The last White Tower closed in Toledo, OH in June 2008; the chain originated in 1926. There were about 230 White Towers at the chain’s height in the 1950s.

The interior of the Orange Hut still contains some hints of its origins, such as swivel stools adjoining a counter.

As a kid, I remember having a burger and coke at the White Tower at 168th Street and Broadway where the NJ buses had their parking lot terminals prior to the Uptown Port Authority bus station being built…The burger was just great…

I remember one on the NW corner of 207th St. and Broadway. The building has now been torn down and it is currently a construction site.

Do they still have Orange Julius stands? This reminded me.

I believe they’re inside of Dairy Queens now. http://orangejulius.com/

My grandmother lived about two blocks from there in the 60’s and into the 70’s, and we used to walk right in front of that White Tower whenever we went to visit. Although we were all burger fans, we never ate there – it didn’t smell very good, and even the windows were greasy. I can remember taking her deposit bottles back to the supermarket that was in between the White Tower and the elevated line shown in the pic, sneaking looks in the door and trying to puzzle out why White Castle and White Tower were so different.

Hung out in white tower Broadway&Nor.blvd.

From the 1970s to the 1980s my family (Grandmother, Sister, Cousins, and I) used to travel through here by the current Q66 bus that used to turn here to complete the loop at nearby 51 Street (re: Woodside Housing where my Aunt and [2] cousins currently live; although the younger sister currently lives in Limerick, Pennsylvania now, she still calls the old neighborhood home when visiting).
Today, the neighborhood has expectedly changed like other citywide localities as usual because nothing stays the same whereas the Q66 goes to Long Island City, the Q18 hasn’t changed at all, the subway still stops here except in reroutings (EE,GG then; N, GG later; double letters reduced to prosaic single letters afterward: R,G [cut back to Long Island City,V [lasted only a decade due to low ridership], and current M [replacing the V that replaced the G]), businesses come and go (as is the case for The Orange Hut saddenedly to hear this: it should have been declared a landmark, there’s $$$ for such preservation, but NO, the city wants condominiums and call it fair housing) and comes again “as something else”, nearby Tower Square shopping Center continues to thrive, Northern Boulevard itself is widened to accommodate more traffic than ever-well it IS 25A-with new retimed traffic and lane turning lights, AMTRAK still flies like an eagle above (finally took a ride Boston-bound 30 years ago), more people. . .