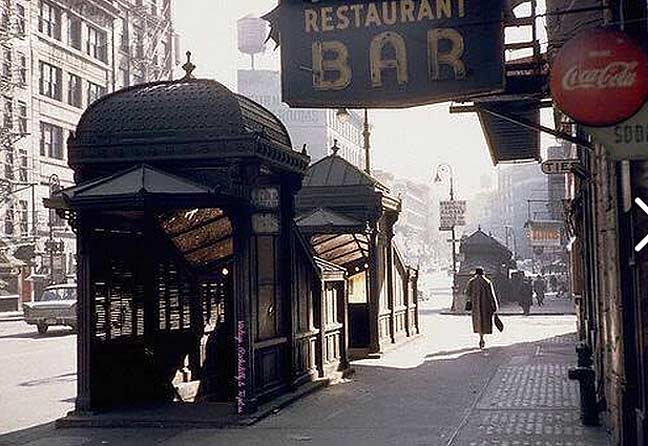 I wish I knew the exact location of this photo from 1960, but I don’t. The photo shows some of the last remaining entrance and exit kiosks, constructed by the IRT, or Interborough Rapid Transit (today’s numbered subway lines) for its original 28 stations from City Hall north to 145th Street along Elm (now Lafayette Street) 4th/Park Avenue South, 42nd Street and Broadway.

The kiosks originally had separate entrance (domed roofs) and exit (peaked roofs) structures, though I’m not sure if that distinction was carried through all the way to the kiosks’ extinction in the late 1960s.

They were always specifically referred to as “kiosks” because they were modeled after entrance and exit structures found on the oldest lines of the Budapest, Hungary’s subway (known as the Metro), constructed in 1896, which were in turn reminiscent of Hungarian summer houses, called ‘kushks’ that were modeled after similar ones found in Turkey and Persia. (New York City has not constructed an entire new subway line since the 1930s, while Budapest’s newest line opened in 2014. The NYC Second Avenue Line is supposed to open three stations in 2016).

Pretty early on, these entrance kiosks, placed on relatively narrow avenues and streets in Midtown, were interfering with sight lines of motorists and accidents were getting frequent, so they were replaced with much less elaborate staircases and railings. All had been torn down by 1968.

In 1986, a replica of one of the entrance kiosks was made from original IRT planning sheets and was installed on a traffic island at Astor Place and Cooper Square.

See Off the Grid for more on the long-lost examples of subway architecture.

This photo, taken at Columbus Circle in 1904, is especially interesting. On the left, you can see Little Liberty, a 37-foot tall replica of Miss Liberty placed atop the Liberty Warehouse on West 64th Street. When the warehouse was torn down in the early 2000s, Little Liberty was moved to the parking lot at the Brooklyn Museum near Prospect Park.

Location is along Lafayette Street. at either the Spring Street or Bleecker Street Stations, on today’s #6 line.

The Budapest Metro system is the second oldest in the world (after the London Underground), and the oldest on the continent of Europe.

I remember the IRT kiosks at 135th & Lenox from the late 1950s. For me it was exciting to ride the subway as a child as I remember the anticipation while walking down the steps to the platform.

I think close to the last standing kiosks were the ones at 50th St. & Broadway. We “found” them still surviving on a family trip to NY (from Long Island), in 1964 or ’65. My Dad took pictures of them. All of the pictures, or a couple of them, have me and my younger brother posing by the entrance.
I think the kiosks at one of the Lenox Ave. stations survived longer – IIRC can check the dates for this at nycsubway.org
There was also one kiosk outside of Manhattan, at 149th St. in the Bronx. I saw it from the 3rd Ave. el – either the platform, or on the train just after pulling out of the station. That would have been during the summer of 1969 (I was railfanning the el with its Steinway World’s Fair cars, and remaining Lo-V’s in service [most or all were trailers]). I told myself I’d go back and photograph it, but I never got around to it. “Sigh” —- too bad.

My guess is Canal Street from the appearance of the buildings and angle of street in background.