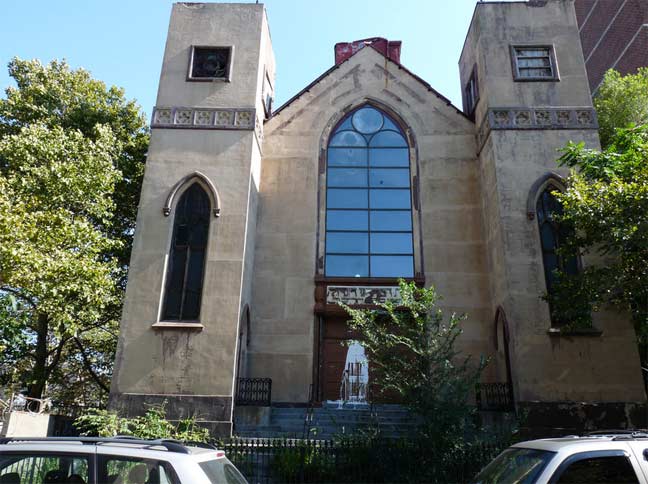 A Methodist church occupied the building from 1860 to 1885, when it was purchased by Congregation Beth Hamedrash Hagedol and refitted as a synagogue. Unoccupied at present, it is a designated NYC Landmark. Its Gothic Revival façade features a tall pointed arch window above the main entrance surmounted by a pedimented roof with a Star of David at the top. Flanking the central section are two square towers with narrow windows.

The interior is painted with a sky-blue ceiling and colorful Biblical scenes.

This synagogue is unique because in the 1880s, it was the pulpit of Rabbi Jacob Joseph, the first and last Chief Rabbi of New York. In contrast to the Old World, many synagogues in the Americas had no tradition of a Chief Rabbi and autonomy prevailed. Rabbi Joseph’s attempt to enforce standards for kashrut, marriages, divorces, burials and education failed.

To this day, the Jewish population in America is diverse in its approach towards religion and no single rabbi dominates the national religious discussion. Rabbi Joseph is buried at Union Field Cemetery on the Brooklyn-Queens border, not far from Harry Houdini and Jackie Robinson. A yeshiva on Staten Island carries his name.