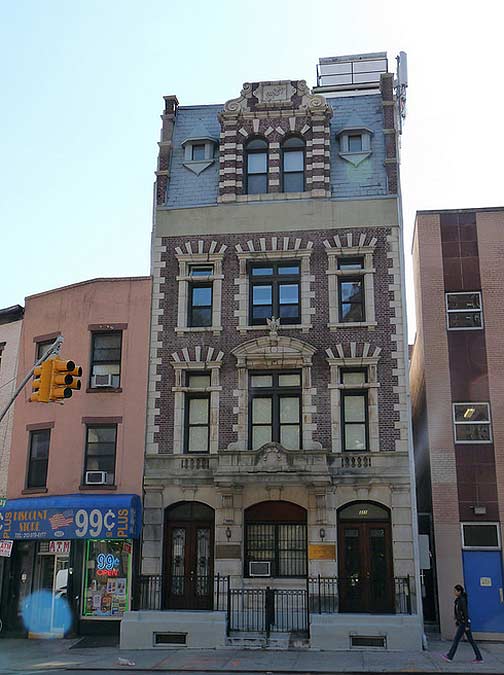 This striking Beaux Arts-style building at 311-313 East Broadway at Grand Street, with contrasting red brick and white stone trim, was built as a community center in 1904 (the date is inscribed at the roofline). The 5-story building contained a library, gym, club rooms, bowling alley and an assembly hall that held 125 people, and an apartment for the janitor’s family on the top floor. In 1919 the building was acquired by the Toynbee House, which was an organization dedicated to aiding poor immigrants with educational, recreational and social services. The ATH trigram above the front door was carved with the organization’s initials.

In 1941 the building was converted by the Jewish Association of Family Purity to a mikvah, or a bathhouse for ritual purification according to Orthodox Jewish requirements. It was again renovated in 1966 to meet the latest requirements and to provide updated plumbing. Men use the mikvah in the morning and women in the evening. In the basement, 6 concrete cisterns, each with a 1000 gallon capacity, supply water for the tubs of lukewarm rainwater used for total immersion.

This is the only mikvah remaining on the Lower East Side, though several still operate in Brooklyn.

men use a mikvah? as to the building, it kind of has an owlish quality, if you look at the dormer windows as eyes and a beak.

The above explains the use of Mikvah.