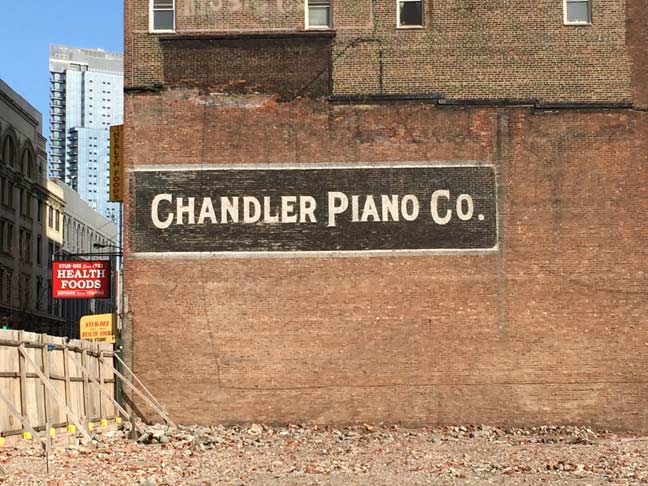 Here’s a rare case of a so-called “faded ad” that’s not faded at all — in fact, it looks as fresh as it did when it was painted over a century ago. Chandler Piano and Chandler-Ebel Music, located at 222 Livingston Street east of Hoyt, was associated with Boston’s largest 19th Century piano manufacturer, Ivers and Pond. Apparently Chandler didn’t expect a building to be constructed next door after the sign was painted, but it soon was — perfectly preserving it! To the degree, actually, that I thought this was a careful reproduction.

The lot has been exposed for about one year, and the ad will again be well-preserved when the inevitable happens and a newer building is erected here.

A much-more faded sign for Chandler-Ebel Music is at the roofline, but it usually has a vinyl ad plastered on top of it.

Why were most/all painted ads of that era exclusively in black and white? Style choice? Lack of durable color paint? Colors were considered too garish?