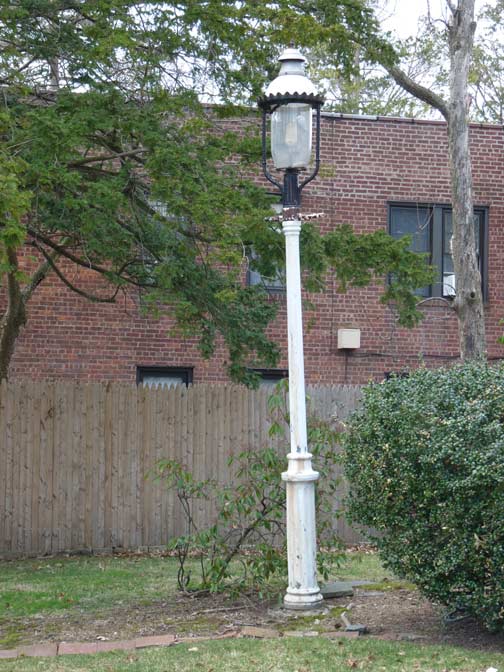 Even though I have been in Little Neck since 2007, I only discovered this curiosity on a lawn on 41st Road near Little Neck Parkway a few days ago. This post greatly resembles curbside NYC gaslamps in use in the late 1800s and early 1900s, at least from old photos and a couple of still-extant posts found in Inwood and Greenwich Village.

There’s an inscription at the bottom of the lamp and using my zoom feature I was able to recognize two words: “Drummond” and “Broadway”; since this is a private lawn I didn’t want to enter the property. There is a Drummond in lamp history, as Captain Thomas Drummond invented the limelight, which employs calcium oxide, or lime, giving off an intense white light that has been used for stage lighting (hence the phrase “in the limelight.”) I don’t know if it has any relevance here, however.

Was this once a NYC streetlamp? There’s no way to tell, but it looks like lamps used over a century ago.

I read in a book about S.I. that there used to be arc lamp posts that passer by would hit (post) with something in order to start the arc and thus light.

I’m sure the owners wouldn’t mind if you knocked on the door and inquired. Esp since, if you still live in the nabe, you’re technically a neighbor.