So longtime Forgotten-NY fans may have noticed, there are two things that attract e in particular when it comes to the city’s geography, waterway and land extremities. In the latter category, my previous Forgotten-NY travels included Breezy Point, Kingsborough Community College, North Astoria, College Point, and Whitestone Point. Perhaps the least visited and lengthiest of the city’s capes is Throgg’s Neck, often spelled with a single G.

Although the name extends to the collection of neighborhoods east of Whitestone Bridge and south of Bruckner Expressway, for this page I will cover just the tip of the neck. The name is derived from Rev. John Throgmorton, a dissident Puritan who followed the example of nearby Anne Hutchinson and Deborah Moody by settling in New Netherlands. The main road in and out of the tip is Pennyfield Avenue. Its name is based on an estate purchased from the native Siwanoy tribe for a penny in the 17th century. The natives valued copper. 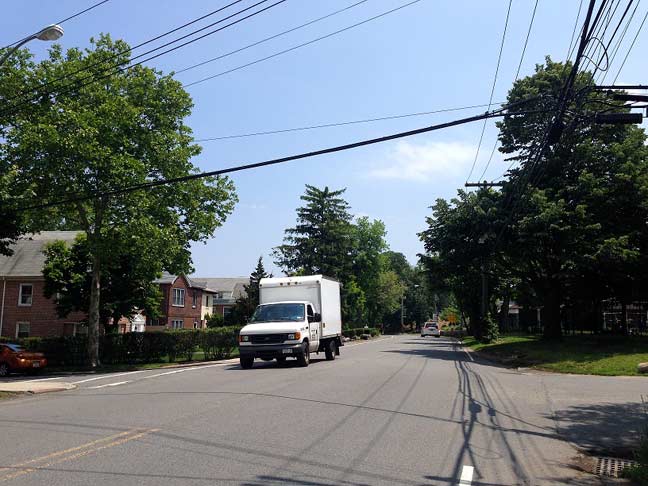 Along the stretch south of Pennyfield to the south of Schurz Avenue, there are no sidewalks and one feels far from the city. An alphabetic list of private lanes is on the right: Acorn, Beech, Cedar, Daisy, Fearn, Geranium and Hazel. These narrow roads belong to Silver Beach, a private community of homes similar in design to Breezy Point. 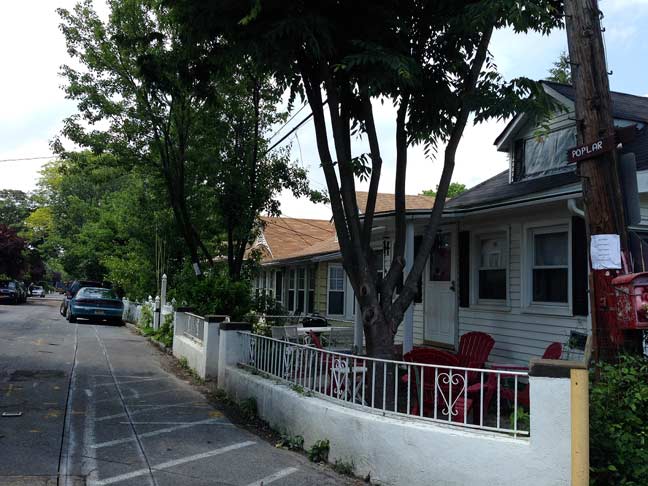 On the left side of Pennyfield Avenue is another set of alphabetic dead-ends: Alan, Bevy, Cassler, Dare, Eger, and Fearn. 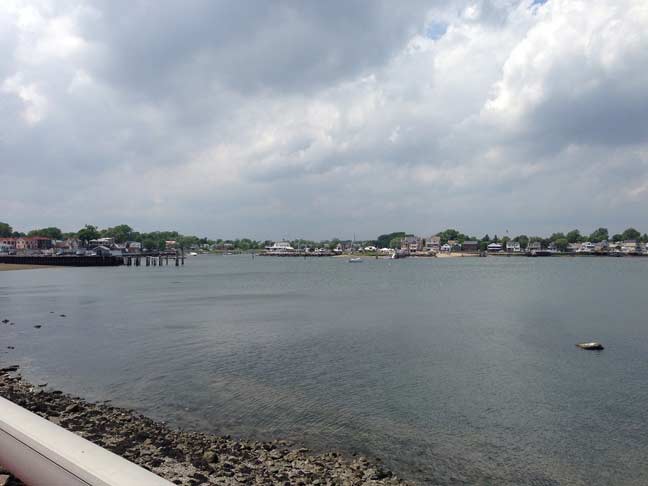 All end by the water’s edge of Hammond Cove, a small indentation in the shoreline.

At the narrowest stretch of the neck, a medieval-style gate marks the entrance to Fort Schuyler, a former military base that presently is used by the State University of New York Maritime College. To enter, one simply should say that you are visiting the SUNY Maritime Museum at the fort. With a show of an ID, you then enter the windswept campus at the tip of Throgs Neck. 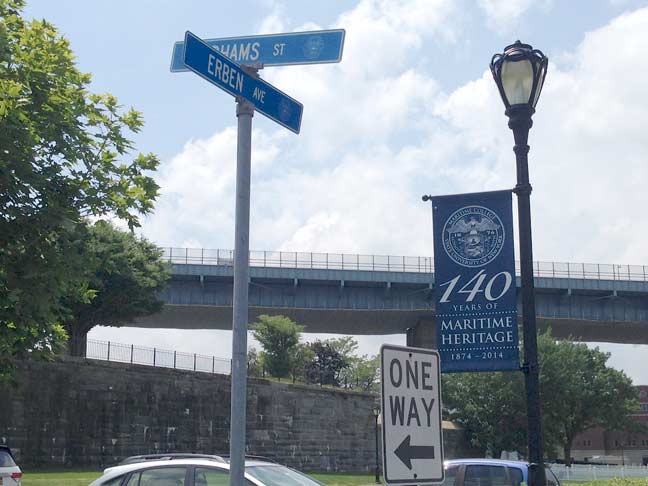 Throughout the campus, sidewalks are colored in the college’s color and blue street signs set the place apart from the rest of NYC. 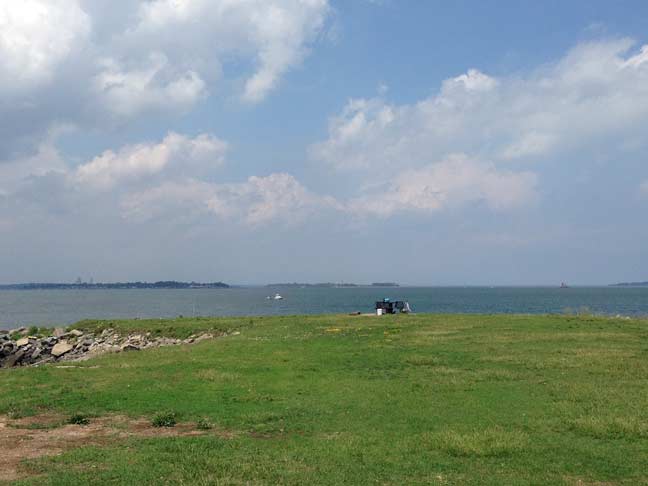 A view to the east is the widening of Long Island Sound. From left to right are: City Island, Hart Island, Stepping Stones Lighthouse and Great Neck on Long Island. 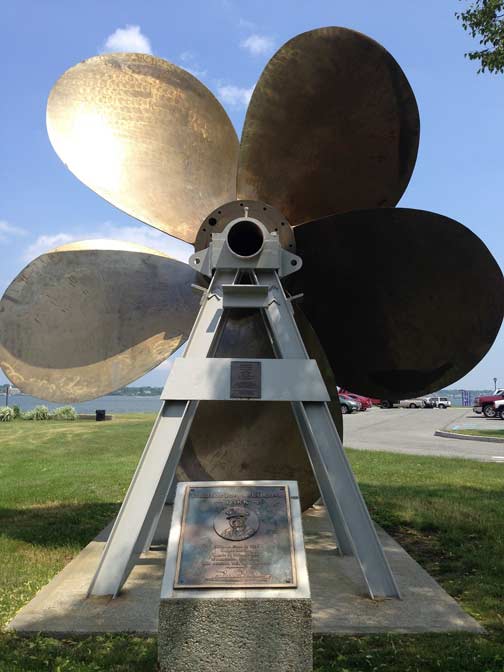 Approaching the actual fort, there is maritime memorabilia everywhere, including a propeller monument in memory of Commodore Leroy J. Alexanderson. The 60,000-pound object belonged to the  SS United States, the fastest trans-Atlantic ocean liner ever built.  According to the NY Times, it was built for speed because it was meant to be a troop carrier if needed. The Pentagon paid two-thirds of its $78 million construction cost. 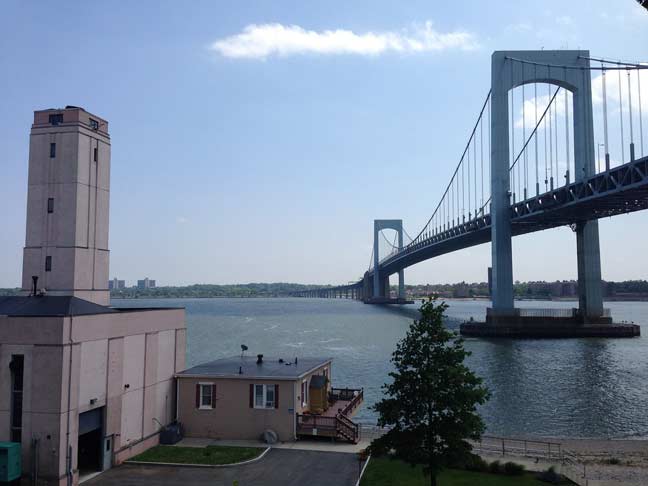 Since 1961, Throg’s Neck Bridge has been giving its shadow to the fort. Despite its name, it actually makes its Bronx landfall at nearby Locust Point while flying over Throg’s Neck. Beneath the bridge, the campus chapel is housed within the stone wall connecting St. Mary’s Pentagon with Battery Gansevoort. The latter’s namesake was most likely Brigadier General Peter Gansevoort, a descendant of Dutch settlers who fought in the American Revolution. He is best known for withstanding a three-week siege imposed by Gen. St. Leger’s Redcoats at Fort Stanwix in early 1777. 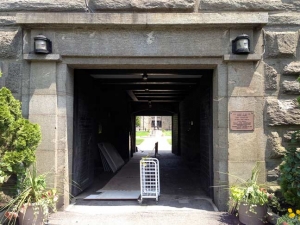 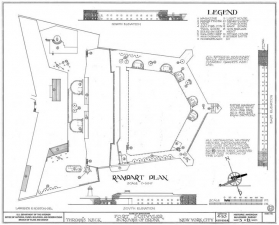 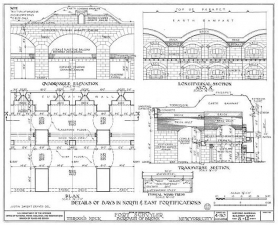 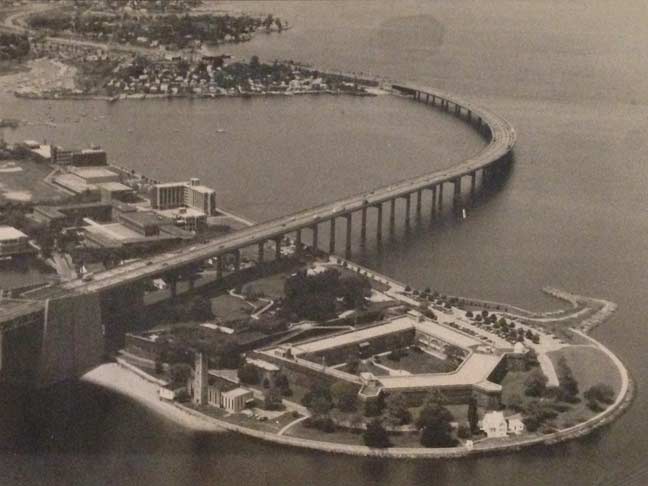 St. Mary’s Pentagon is the main military installation at Fort Schuyler. Its namesake is also an American Revolutionary descended from the Dutch, Major General Philip Schuyler. He repelled the British at Saratoga, along with Gen. Horatio Gates. After the war, he represented the state as a Senator.

The fort was constructed between 1833 and 1856, designed to guard the eastern approach to New York City from another British invasion… which never came. On the opposite side of the water is Fort Totten in Queens. Between them is the imaginary line that mapmakers use to separate East River from Long Island Sound. During the Civil War, the fort was used to hold Confederate prisoners of war and a military hospital. The last soldiers left in 1911 and for the next two decades, the fort stood unused. In the 1930s, the New York State Merchant Marine Academy (now SUNY Maritime College) arrived at the fort. 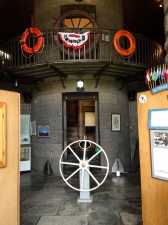 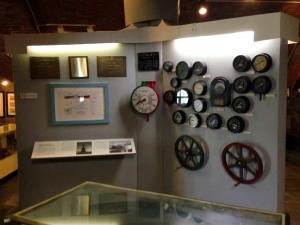 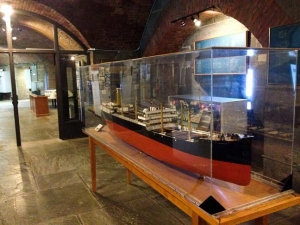 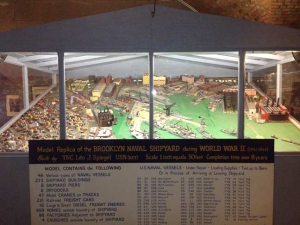 In a city that is full of museums, perhaps the one with the least number of visitors in comparison to its value it the Maritime Industry Museum, located inside the walls of Fort Schuyler. Inside the museum is a 1942 scale model of New York Naval Shipyard, better known as Brooklyn Navy Yard. 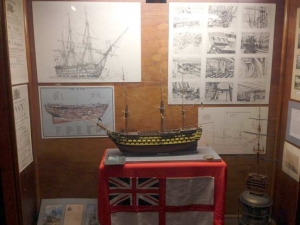 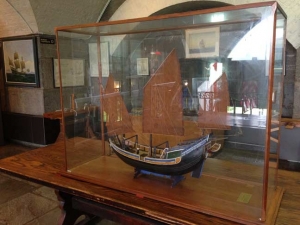 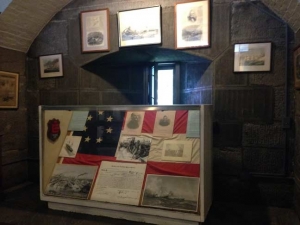 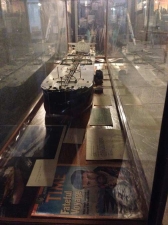 Also: a model of the doomed Exxon Valdez, the victorious HMS Victory, a Chinese junk ship, and a captured Confederate flag.

COMING TO AN EL NEAR YOU…

Great as always Kevin. Can I nominate the Throgs Neck Bridge as the least known, loved, and iconic major suspension bridge within NYC? (and I grew up not that far away from it – in Whitestone!)

Why the state has a merchant marine academy when this country no longer has a deep water
merchant marine industry no man will ever know.
Mr. Spock would find this one a classic of human illogic.

Chris, I graduated in 1994 and have sailed aboard commercial unlimited tonnage ships since.

Chris, what planet are you on? Apparently you’re very busy in Space…..the final frontier.

Dave, don’t take it personally. If he thinks that Mr. Spock has his answer, and is unaware that the maritime industry is alive and thriving, he never would have survived an evening in C company. Then again, he referred to it as a “merchant marine industry”, so he cannot be that educated on the topic.

As quoted from ABC News,”Graduates of the State of New York Maritime College in Throggs Neck, New York, may get awfully tired of having to explain what a Neck is; but they’ll be compensated by a salty starting salary of $57,300.”

Not bad for a redundant industry. Somebody must be interested in hiring these grads.

Auntie lived in Beechhurst at Cryder House. Every time I visited her (for over 30 yrs until she passed) I loved looking out over the TN Bridge, could see Fort Totten, Part of City Island, part of Orchard Beach, all the tugboats pushing barges, and of course, Fort Schuyler. Some friends took me on a tour there once– it was MUCH bigger in area than it looked from Auntie’s windows

I graduated from the Maritime Col. in 1957. Not only was it a great school, it was truly a beautiful and peaceful environment. Shortly thereafter Robert Moses put up that bridge. It’s still a great school however.