In 1963 or so, Studebaker joined a long list of automotive names that no longer exist.  Names such as Edsel, Pinto, Corvair, LaSalle, Desoto and AMC (American Motors Corporation) exist now only in people’s memories. Studebaker did relatively well in competing with other independent car makers and the Big Three (Ford, Chrysler and GM) until the early 1950s. Even though they were known for well engineered autos ,  the company succumbed to many managerial missteps.  Studebaker’s labor costs were the highest in the industry and they took their eyes away from insuring quality control.    In addition, Studebaker could not compete with the Big 3 being, especially when they, the Big Three,  were  embroiled in a price war. With sales plummeting rapidly, cash flow was a problem, causing them not to have enough in reserve  to develop new models.  During that period,  Studebaker did produce some models that  were stylistically competitive in the auto industry. 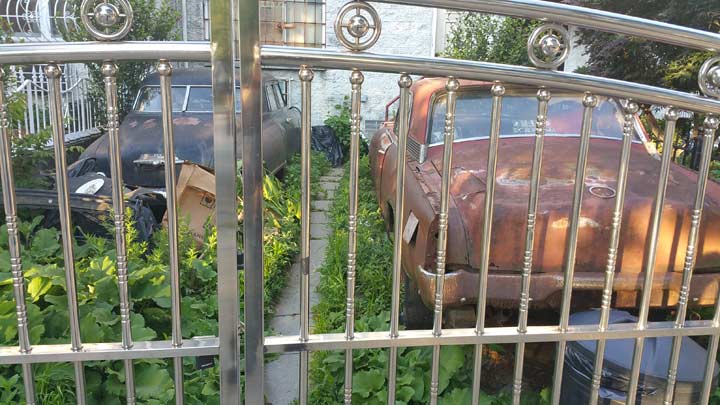 Personally, I can say without a doubt that these cars have been sitting here on the south side of Clermont Parkway, between Boston Road and Crotona Park East since at least January, 1983. I know this because three months after I began my career at the MTA as a Bus Operator, I was assigned to the old West Farms Depot, a former trolley barn, that was located on the east side of  Boston Road, between East 175th and 176th Street at that time.  I remember seeing these two Studebakers and would wonder what were these car’s stories – who owned them? when were they abandoned? when were they manufactured? and why was there no attempt to restore them?  As of this writing in July, 2015, they’re still  sitting there rotting. 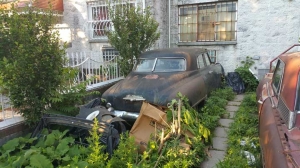 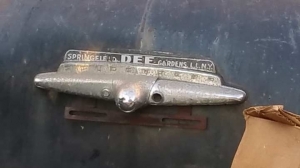 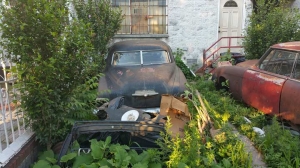 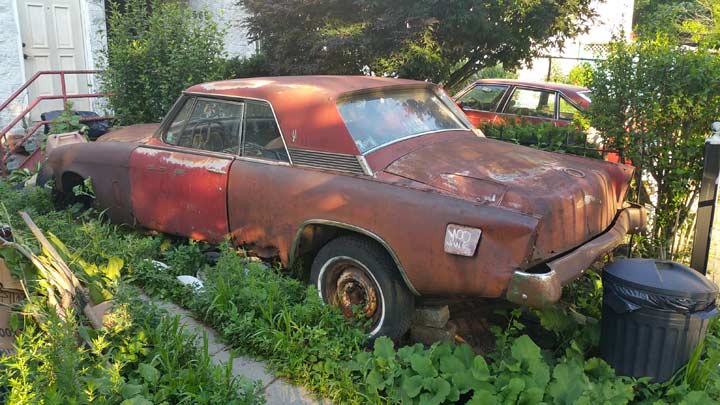 The Studebaker Lark, the red one, dates from circa 1961. It was manufactured when Studebaker was in the depths of financial distress.

Perhaps, even though they have deteriorated greatly, they could be restored to their original beauty.

I am open to any corrections, if needed,  on the identification of the models’ names and years.  As I’ve always said, FNY has many  knowledgeable fans who will point out any miscues.

The property owner of the rusted Studebakers is likely Elihu Hassell McMahon, who owns the lot. By the way, the block is actually called Wilkins Avenue, connecting Claremont Parkway with Louis Nine Boulevard.

Most of Wilkins Avenue was renamed in 1985 after Assemblyman Louis Nine following his death in 1983. Only the northernmost block of the avenue retained the name Wilkins.

This is the Crotona Park East neighborhood, famous for the nearby Charlotte Street slum. Over the past 30 years, the neighborhood has seen a lot of changed whiel the Studebakers continued ot rust away.

Correction # 1: Studebaker ceased production in South Bend IN in 12/63. Production was moved to Hamilton, Ontario, Canada. The Avanti, Hawk, & Wagonaire models were discontinued. The remaining model used Chevrolet powertrains. Finally, in 1966 all production ceased & Studebaker was history.
Correction#2: The red Studebaker is a Hawk (not a Lark), model year 1962-64.

For more information on the reasons for the demise of Studebaker-Packard refer to Hemmings Classic Car, 9/15. My letter to the editor appears at the bottom of P. 40

Your letter in Sept 2015 Hemmings Classic Car is absolutely correct. As well as your additional comments below that restorations are money pits – even if you do it yourself ! But that being said, there are those of us that just have to own and drive really older (ie pre WWII) cars. Studebaker made great cars, their Land Cruiser sedans of the mid thirties were spectacular looking automobiles. Thanks for your comments they are great.

The ‘red’ car is a Hawk, Studebaker’s attempt at a personal luxury coupe like the T-bird. Unfortunately, what little can be seen indicates there isn’t enough to restore.

BTW: When I lived in Queensborough Hill someone on 64th Avenue had a 1962 or ’63 Lark parked under a tree for almost forever. I lived there on & off from 1984-91 & then 2000-2005. Like the tree it was parked under, it just sat & got older. I’m sure the owner dreamed of restoring it, but the reality is restorations are money pits. Real estate value usually appreciates; old car values, with very few exceptions, don’t. This why so many dead cars sit for so long. The same party also had a second generation Honda Prelude parked under the same tree. In my opinion, the Prelude was a keeper; the Lark was a taste I never acquired.

.
.
My grammar school, St. Bartholomew in Elmhurst, had a Studebaker dealer across the street.

When I was in college we knew guy a hot-rodder with a custom car, a Studebaker with a Packard engine, how’s that for two dead brands in one? He had cut open the hood to accommodate it.

My uncle had the Stude that looked the same front and rear, you couldn’t tell if it was coming or going. Said to be well-made and reliable.