Furman Street runs north from Atlantic Avenue to Fulton Street along the East River waterfront in Brooklyn Heights. It has undergone two separate areas of feverish activity, separated by an era in between of nothing much happening at all. Beginning in the 1800s and continuing to the late 20th Century, this was a dockside area in which goods were unloaded from barges and shipped to warehouses along a now-vanished waterside railroad; until a few years ago, old tracks were still visible.

After shipping moved to container vessels in New Jersey, the waterside area adjoining Furman Street went into a three-decades’ long slumber, with abandoned, deteriorating, graffiti’ed buildings and empty lots, interspersed with the abandoned trackways. Then, a new  boom came to Brooklyn during the Bloomberg era, 2002-2014, and new apartment buildings and a brand new Brooklyn Bridge Park began to take shape between Atlantic Avenue all the way around to Jay Street in DUMBO.

Throughout all three eras, Furman Street stood apart from other north-south streets in Brooklyn Heights. It stood at the bottom of a steep bluff for which the Heights were named. Beginning in 1946 the Brooklyn-Queens Expressway was constructed at the west end of the bluff, separating Furman Street even more from its parallel Brooklyn Heights streets. Today, only Joralemon Street descends the bluff to meet Furman. However, pedestrians have, or used to have, other options on how to cross the bluff and get to the waterfront. 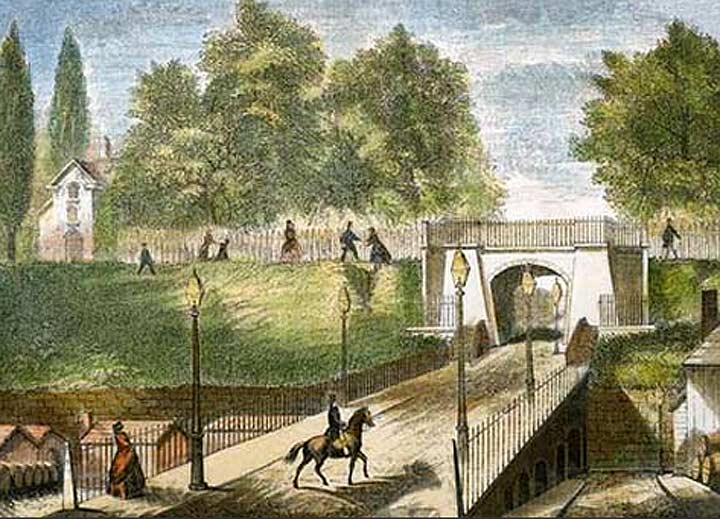 In this 1850 view we see a stone ramp descending from Montague Street in Brooklyn Heights.

Designed by Minard Lafever to cross the part of Montague Street that descended from the top of Brooklyn Heights to the old Wall Street Ferry, the stone arch became locally famous for the voice echoes it made. The charming bridge and the sunset views quickly captivated couples and young families who made the location a favorite spot for rendezvous, promenades, and picnics.

The span at the top of the arch connected Montague and Pierrepont Terraces and was called the Penny Bridge, since an actual penny toll was charged to cross it! (This Penny Bridge should not be confused with the old Meeker Avenue Bridge connecting Meeker and Review Avenues across Newtown Creek before the Kosciuszko Bridge was built in 1939.) 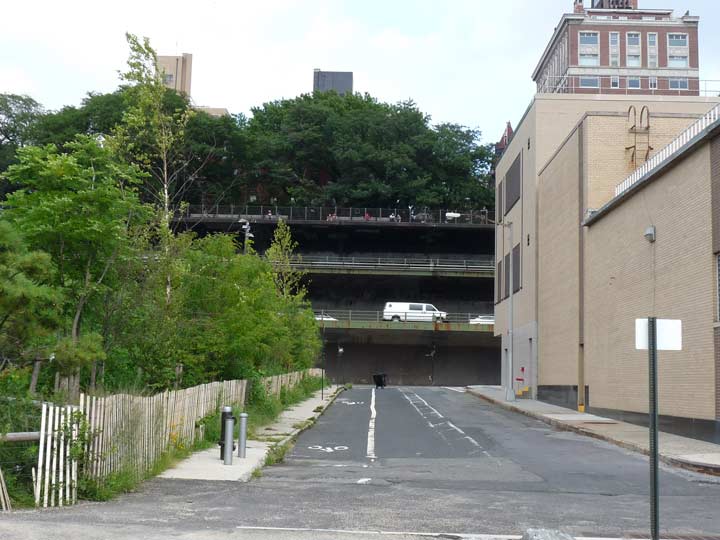 Today Montague Street exists as a C-shaped stub on Furman Street, with a subway ventilator contained within the bowl of the “C.” The place of the former stone ramp that descended to the waterfront is now occupied by the ventilator. Seen in the rear are the Brooklyn Heights Promenande on top, and north and south-bound lanes of the Brooklyn Queens Expressway. 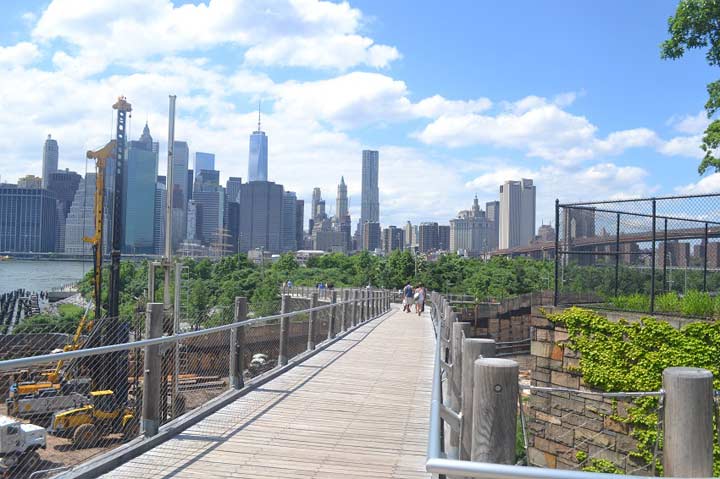 In 2013, another span crossing both Furman Street and the BQE was opened between Columbia Heights and the new Brooklyn-Bridge Park. Its east end is in Squibb Park, named for a pharmaceutical manufacturer formerly based in Brooklyn Heights, and so the bridge was named the Squibb Bridge.

The bridge’s design was based on wood catwalks found in state parks throughout the country, and was constructed to “give,” or “sway “a bit while pedestrians crossed it. However, some found the bridge swayed too much and the bridge was actually making some people seasick. (I can attest to this as some members of a tour I conducted in the area in 2014 were distinctly uncomfortable.)

Because of this, the Squibb Bridge was closed in August 2014, and it’s unclear when adjustments will be effected and the bridge will reopen.

Indeed, I can attest to the very pronounced swaying, which I experienced last summer while crossing it. I found myself teetering off balance left to right & back.

It really scared me, & the 1st thing that came to mind was Genevieve Bujold’s son on his bike in “Earthquake”! Thrill rides should be confined to Coney Island.

Considering just how long it’s been closed, I have to wonder of there were some really serious concerns about its structural integrity. If so, I certainly hope they’re being addressed & will be remedied.

Even when/if it re-opens, I’ll just as soon walk out of my way & take the long route instead.

There’s a great photo on oldnycphotos.com from 1914 which shows the cobblestoned Montague st.
I’m not sure but it is possible you can see a very slight glimpse of the Hotel Bossert built in 1909.
Great column