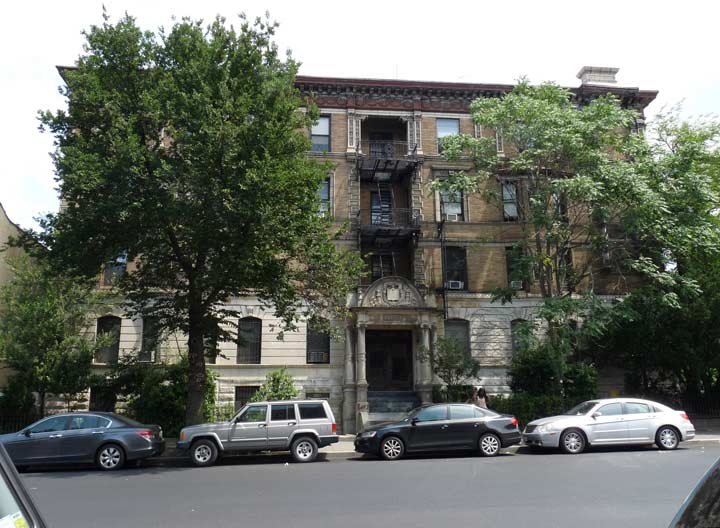 Near-insensate from this summer’s unrelenting heat, I sweated my way up 9th Street early in August 2015 to scout an upcoming tour when I spotted a gorgeous apartment house, one of many located along Prospect Park West facing the park. Just look at the recessed shady areas providing natural cooling in summer, and the entrance shelter with four Ionic columns, among many of the other decorative elements of the Beaux Arts era, a few years either side of 1900, when this magnificent creation (at least on the outside) was built. 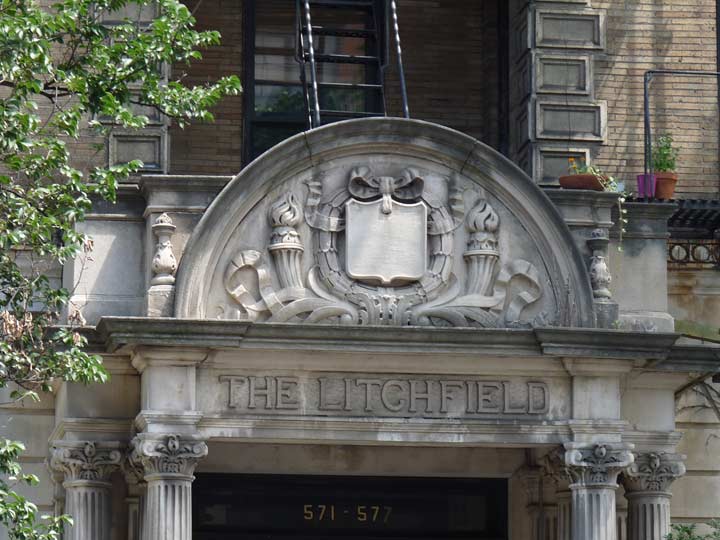 I noticed the apartment house had a name, as many do: The Litchfield. I recognized the name. Park Slope, in its present fashion, exists because of a man named Litchfield.

In many ways industrialist Edwin Litchfield is the father of Park Slope, since, while converting Gowanus Creek into the Gowanus Canal beginning in the 1850s, he also purchased a full one third of all the land between the canal and what is now Prospect Park, eventually, along with other landowners, hiring architects to draw up lots and cut through streets. The opening of the Brooklyn Bridge in 1883 led to a housing boom and by 1900 many of the beautiful buildings we see in Park Slope today had been built.

Litchfield dredged Gowanus Creek to create the ship canal that exists there today, and some still cling to the dream of cleaning it up and making its banks habitable. On the negative side, under his watch the historic Old Stone House in J.J. Byrne Park, the site of the Battle of Brooklyn where 400 troops from Maryland battled the British and allowed the bulk of the patriot’s forces to elude the Crown, was allowed to deteriorate and nearly sink into the sand, only to be reconstructed later on.

Litchfield’s role in developing Park Slope is also remembered by his mansion, which still stands in Prospect Park near 5th Street; it was built there before the park was developed.

I delve further into Litchfield and the buildings that remember him on this FNY page.

I had never before, though, noticed the name of this Beaux-Arts apartment building, whose architects remembered him too.

The EPA has declared the material in the Gowanus channel toxic. It cannot be dredged by the Corps of Engineers unless a plan and many dollars per cubic yard are budgeted in the future. Any plan proposed for the material disposal is sure to be controversial.

This doesn’t surprise me since the Litchfields had a lot of property around Prospect Park in the early days.

The Litch is back!

We live at the litchfield