SCENES FROM THE PLATFORM, Queensboro Plaza

So I was hanging around on the west end of the Queensboro Plaza station in the brain-melting heat of the NYC summer, trying to get to Astoria, when I saw a couple of unusual and soon-to-be-retired subway train sets. The station provides nearby views of midtown Manhattan as well as clear views of Astoria and Hunters Point. I can provide vantage points for you to peek at four major NYC suspension spans from the platform, too. It’s one of the more unusual stations in the system, as well, since it provides across-the-platform connections to both the IRT Flushing Line and the BMT Astoria Line (until 1949, the lines were jointly operated by the IND and BMT). 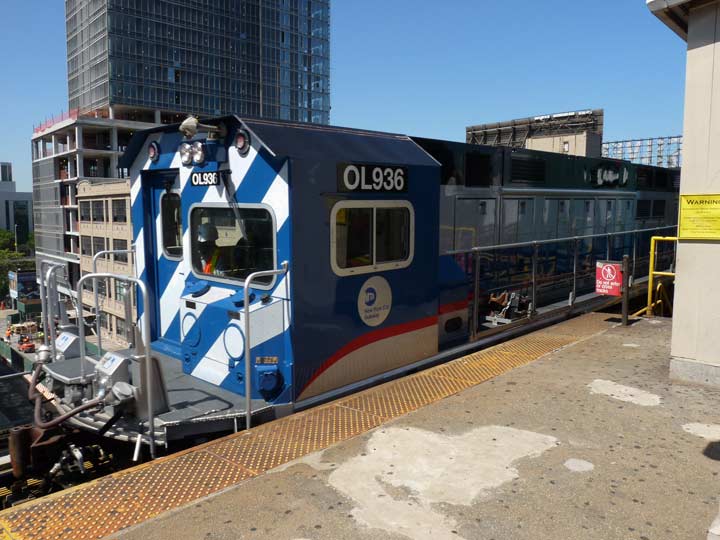 The title card (for those of you who can see it) shows a work train pulled by an engine car, OL936. I’m going to depend on FNY subway buffs for this one because after hunting and pecking for a half hour at the NYCSubway work trains page, I couldn’t find this listed.  It does appear to be a newer engine.

Though it’s pulling in on the IRT Flushing Line side, I observed it employing one of the few track connections between the IND and BMT just east of the Queensboro Plaza station onto the Astoria Line, where it ran on the local tracks. This necessitated your webmaster and all other BMT “customers” to take the N train to Astoria Boulevard and then wait for a local train to run south and deposit me at Broadway, my destination. 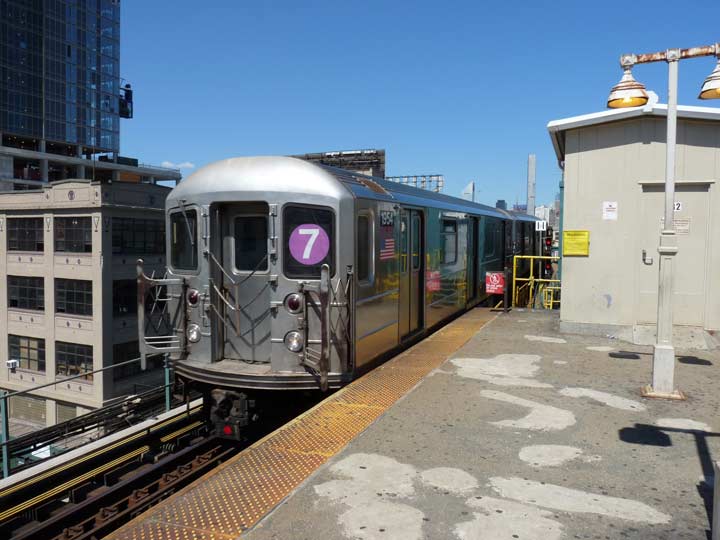 It wasn’t too long before a #7 Flushing Line train arrived. I noticed it was one of the now-vanishing breed of R-62A cars employed on the line; these are being rapidly phased out and replaced by R-188 cars, many of which still have a “new car smell.” The R-62As and their brothers, the R-62 cars, first saw NYC subway tracks in 1983. The R-188s were introduced in 2012.

The R-62As on the Flushing Line were first introduced in 2003 and rapidly took over for R-33 and R-36 cars, introduced on the line in 1964, taking passengers to the 1964-1965 World’s Fair; they were painted in light blue and white in those days, and some carried the names of sponsoring states. After several years spent being covered in graffiti, a dark red — maroon color was settled on and the cars became known as “redbirds.”  A few Redbird cars can still be seen in the Corona Yards near Citifield. 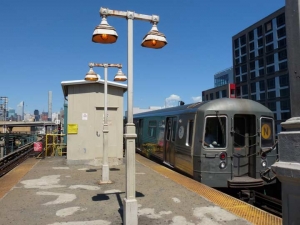 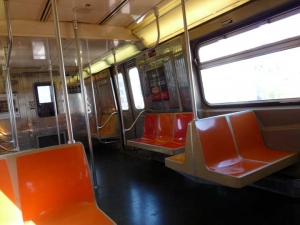 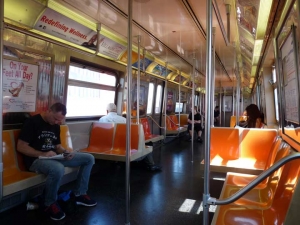 As stated I was traveling to the Astoria Broadway station and waited a few more minutes for the N. I was indeed fortunate to see a set of R-68 cars pull in; the N usually employs newer R-143 cars, but for the summer, some trainsets are being used on different lines.

The R-68s, introduced in 1986, featured the same color scheme and seating layout as the older R-46 cars first introduced in the mid-70s. The chief difference (for me at least) is that while the R-46 has light brown walls with faint alternating seals of NYC and NY State on it, while the R-68s have shiny silver walls with vertical striping.

I mourn the eventual phaseouts of the R-46 and R-68/68A cars, since the seating scheme allows you to sit, turn your head and watch the borough go by, at least on the elevated lines, and closely observe the stations in the underground lines.

I do not know why the MTA has used the bench system for the new R-143 and R-188 cars, which gives you a great view of the guy clipping his nails or eating takeout chicken opposite you. But I’m just a crank.

I can’t end without mentioning that Queensboro Plaza uses reproductions of classic lampposts used on many IRT and BMT lines when the stations were first constructed in the 1910s and 1920s.

OL936 is one of the newest members of the fleet. Manufactured by Motive Power Inc (MPI) it is a combination diesel/electric loco – able to be used anywhere on the system. Delivered between 2013 and 2013, the series of locos was ordered under procurement contract R-156. I believe MPI calls this an AP8AC.

I agree with you. I never liked the bench system and see no need for that seating on the BMT and IND former lines as they were called…

The original decision to eliminate the BMT/IND forward-facing seats came in 1960 with the introduction of the R-27/R-30 cars. The forward-facing seats were revived with the arrival of the R-44s at the same time the agency went to the 75-foot cars for the B Division. Once the decision was made to go back to the 60-foot design because of their greater versatility within the system (manly the ability to run on the J/L/M/Z lines), the MTA went back to the bench seating due to the additional number of standees that allows on trains with less cabin space. If the MTA opts to resume buying 75 foot cars in the future, we’ll see if they go back to the forward-facing seats.

You mean to tell me that those lamposts in the photos are new reproductions and are already rusting to hell?
Ive heard a deferred maintenance but this is ridiculous!
Sheesh!

MPI is a cast off company of GE and the locomotive is a up graded U8C as MPI re bilts all of the GE light(under 90 ton)diesel locomotives to up grade EPA standards…..by the looks to MTA unit Id bet its a ground up re build of a traded in U8C…..just my 5cents worth,Im a 35 years retired railroad car inspector(Conrail and CSX)