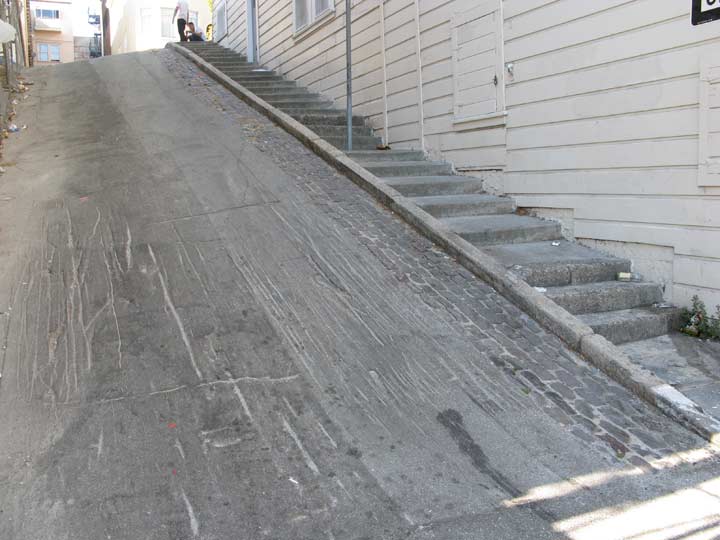 I visited San Francisco for a week in August 2008. I seem to find the heat waves — the usual weather is between 65 and 75 degrees in August, but it was in the 80s all week, even touching 90 one day. I was undaunted and got over 750 photos, most of which I’ll get to if I ever have enough &&& to build a Forgotten San Francisco website. As you may expect, I hit the usual “tourist” spots but also explored my own idiosyncratic interests.

One of these is alleyways, and unlike  Manhattan, San Francisco is chock full of named alleys, most of them with residences and businesses.

Pictured is Romolo Place, which runs for 2 blocks between Broadway and Vallejo Street near the heart of the North Beach area. Where Romolo Place meets Fresno Street the grade is so steep that steps have been built on either side of the road to help pedestrians. 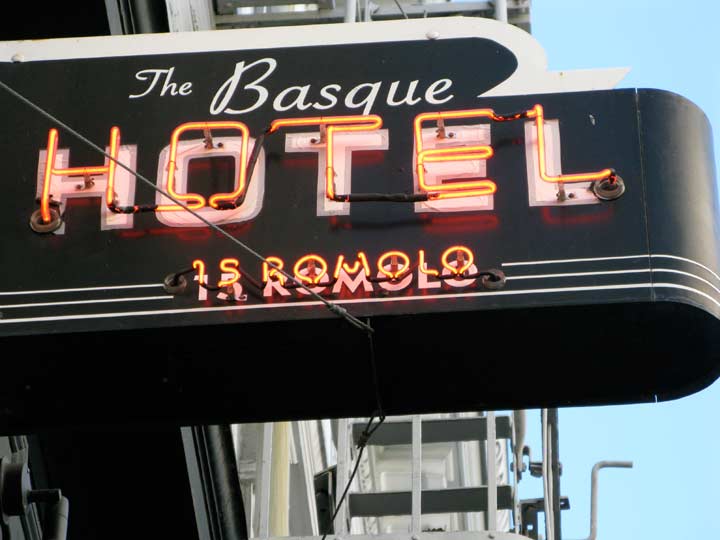 San Fran is also full of working and nonworking sidewalk neon signs, such as this one for the Basque Hotel at 15 Romolo.

While I like the San Fran street sign design — large black letters on an off-white background — I find the lack of “Avenue,” “Place,” or “Street” designations annoying. I imagine San Franciscans just leave off the suffix when referring to streets, but officially, they do have these designations and I think they should be on the signs…

I wonder what caused those long linear groves in the asphalt? At first, it appeared to be caused by the curvature of the street leaving some undercarriage to drag, but the road geometry is not right for this, so I am puzzled. Ice and snow removal? Not likely for San Francisco, but I do remember once or twice in the past 50 years the city did briefly have some snow, which made for very interesting times behind the wheel in this hilly city.

Of course you mean NORTH Beach. The steep grade, the beginning of Telegraph Hill.