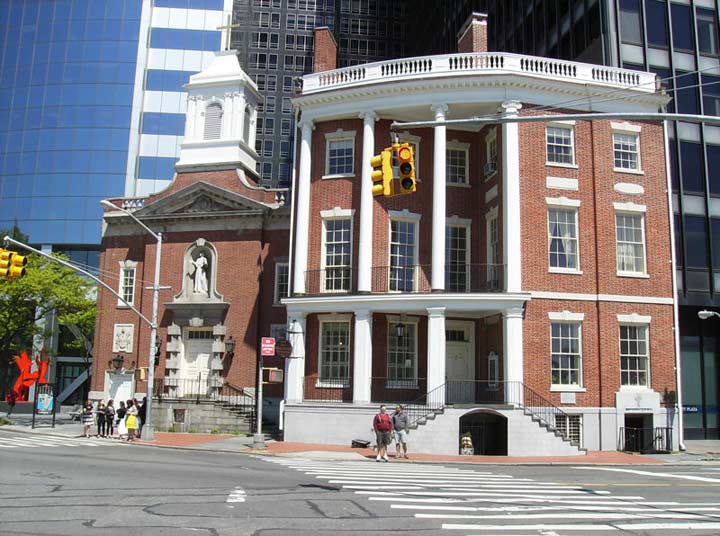 Originally the James Watson House, the Shrine of Elizabeth Seton (the pillared building on the right side of the picture) was constructed between 1793-1806, making it one of the oldest buildings on the island, and was restored in 1965.

Mother Seton was born on Staten Island and baptized Episcopalian, later converted to Roman Catholicism after her husband’s death, and lived with her family here between 1801 and 1803. She founded America’s first order of nuns (the Sisters of Charity) and established the American parochial school system. She was the first American-born saint and was canonized in 1975.

The Watson house is the last survivor of a group of Federal-style townhouses that once followed the curve of State Street. The right side is the oldest (1793) and the left the newest (1806). The curved porch features columns made from ships’ masts.

The building on the left side of the photo is The Church of the Holy Rosary, the southernmost Catholic church on the island of Manhattan. In 2014 the parish merged with St. Peter’s Church on Barclay Street, the oldest parish in Manhattan.

On Wednesday afternoons, they have a small exhibit in the basement on immigration and the work of Seton.

Unfortunately, its neighbors makes it feel as if it doesn’t belong there despite long predating them by about two centuries.