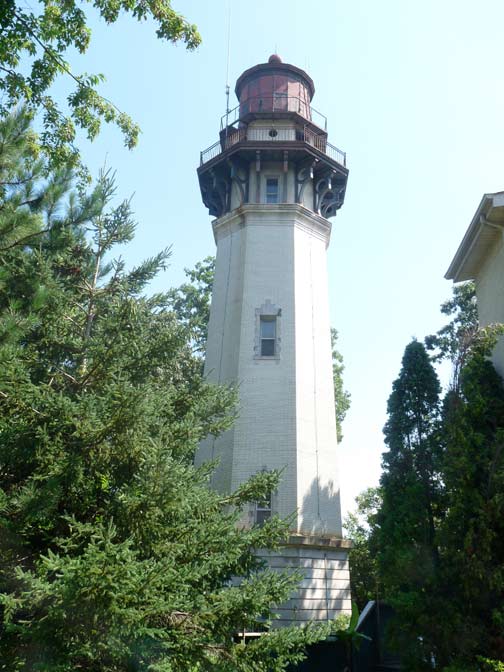 Staten Island has several land-anchored active lighthouses (Brooklyn and the Bronx have one apiece). The Staten Island Lighthouse, built on Edinboro Road in Lighthouse Hill near Richmondtown from 1907-1912 and operating since 1912, is one of Staten Island’s architectural treasures.

In its early days, the lighthouse keeper kept oil-powered pumps going to operate the lens. Horse-drawn carts needed to make the arduous climb up the hill, whose difficulty was exacerbated by snow and ice in the winter. Today, a 2nd order Fresnel range lens it acquired in 1939 sends a beam 18 miles into Lower New York Bay  that lines up with the West Bank Light off South Beach. It is run by the US Coast Guard today and is now fully automated.

In 1912, the New York Times wrote that the Staten Island Lighthouse was “destined to take its place among famous beacons of the world, such as Eddystone Lighthouse, on the Eddystone Rocks, about fourteen miles from Plymouth, England.”

For much more on this part of town, which includes the only private residence in NYC designed by Frank Lloyd Wright, check this FNY page.

Not being a New Yorker, it’s hard to find all the sources I would like. According to the website ‘Lighthouses of the United States: Downstate New York’: “Although Staten Island Lighthouse never quite reached the heights predicted for it by the New York Times, it was declared a Historic Landmark by the city of New York in 1968.” Is this true? I can not find any designating info for this or any association/society tasked with the care of the lighthouse. The ownership seems a bit foggy (Coast Guard or private?) This was all brought about by trying to find out the architect of this handsome building. Any info/direction greatly appreciated. Thanks

See the following for information on the lighthouse and its official designation.