Quietly, the MTA is “celebrating” a century of the BMT 4th Avenue line in Brooklyn, which has served first #2 trains (the BMT was originally numbered), then RR trains, then R trains in most of its stations since June 22, 1915. All stations between DeKalb Avenue and 36th Street opened that date along with the 59th Street station, as well as stations along the Sea Beach line (N) which runs in an open cut through Bensonhurst and Gravesend. The 45th, 53rd, Bay Ridge Avenue, 77th Street and 86th Street stations opened January 15, 1916, while the 95th Street terminal opened on October 31, 1925. To my knowledge no mention of this Bay Ridge-Sunset Park-Park Slope transportation lifetime has been mentioned in the press.

That’s likely the case because the entire line didn’t open in 1915-1916; the line reached Canal Street over the Manhattan Bridge in September 1915 but the line was gradually extended up Broadway and in Brooklyn Heights from 1917-1920. 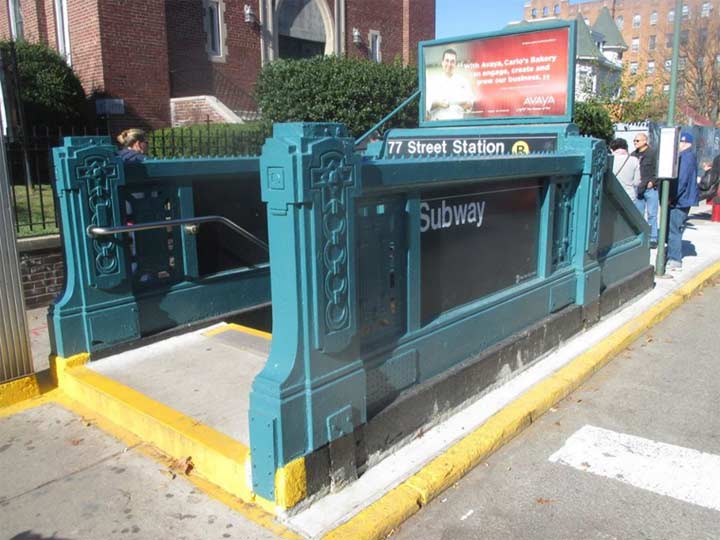 In November 2015 I did a tour of part of Dyker Heights and Leif Ericson Square, and the closest subway to where we were going was at 77th Street, so we met there. Again, it’s little chronicled but the southbound station is still the original from when it opened in 1916, though a lighted canopy identifying it as a BMT station that stretched above the entrance has long since been removed.

The entrance is massive and is reminiscent of the original IRT entrance and exit kiosks that opened in 1904; some lasted till the late 1960s.

The design motif is of particular interest. There wasn’t always a church at this corner, but the designer chose to include a cross on the design along with interlocking circles.

Modern-day detailing doesn’t include elements like this. Most of the other entrances along the 4th Avenue Line have mostly the familiar “jail bars” design, though indicator lights vary along the line — some are green globes, to indicate 24-hour service, while otehrs are the newer design with just a green “cap” on a white globe. At 45th Street, there are a pair of vertical illuminated “SUBWAY” signs. 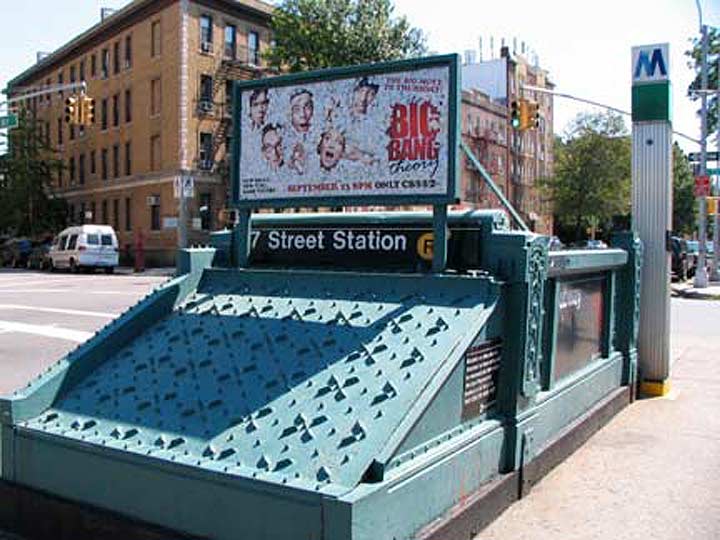 The back end of the entrance is also interesting. One wonders if the “spikes” were placed to discourage lounging or laying on the slanted surface. 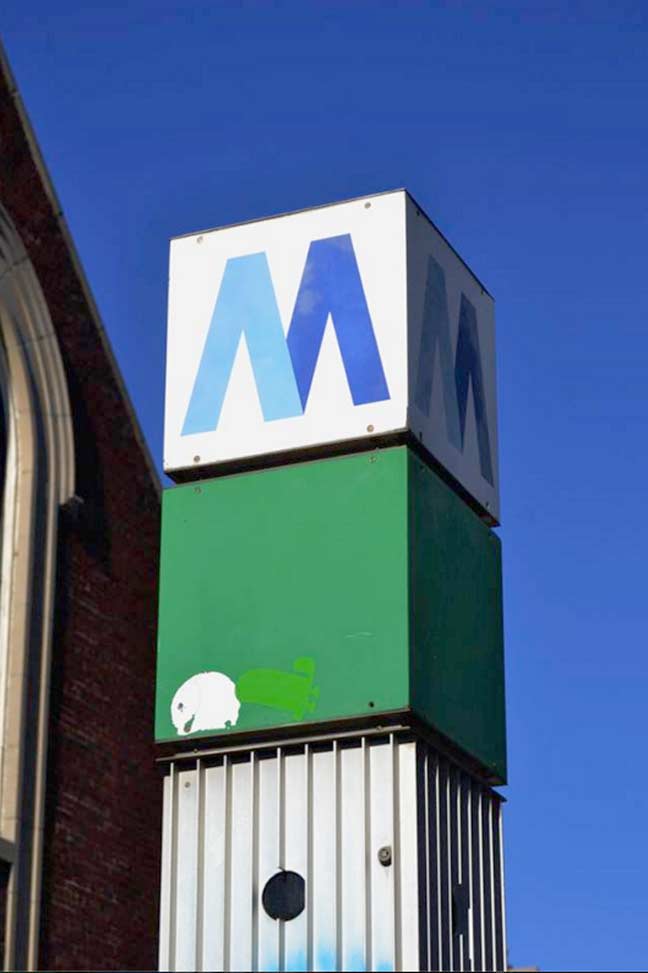 Found occasionally along the line is the two-color “M” that was part of the official MTA logo that debuted in 1968, until 1998, when the “Doppler” or “Pac-Man” MTA logo was designed. The green globes are cubes here. While the M and the cube are used for some stations along the line, the only freestanding stanchions are here at 77th Street. 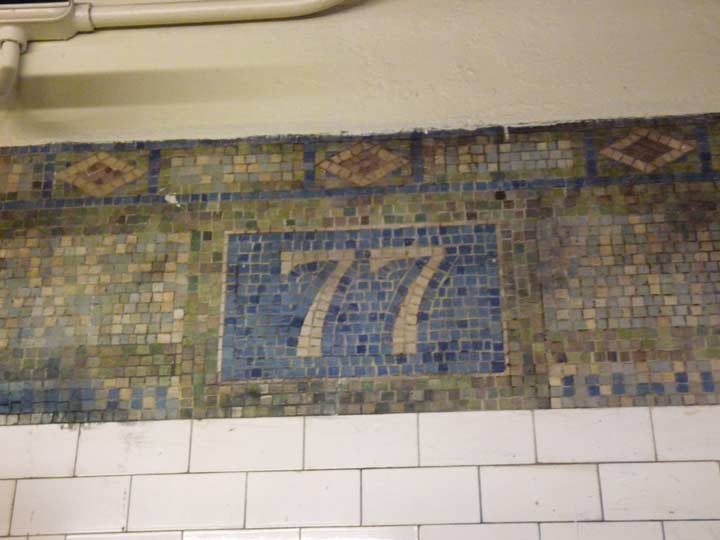 When the 4th Avenue Line debuted in 1915 and 1916, station decorations and ID tablets were mosaics, along with virtually all BMT stations opened in this time period. In 1969, stations along the line got a modern redesign, mostly off-white tiles with monocolored tablets in four colors: tomato red, blue, yellow and gray. Broadway stations also received this redesign, but all Manhattan stations with the exception of Rector Street had their original mosaics uncovered and restored in the 1990s.

However, in exit alcoves some of the old mosaics were allowed to remain, like this “77” ID that was once found all over the platform. 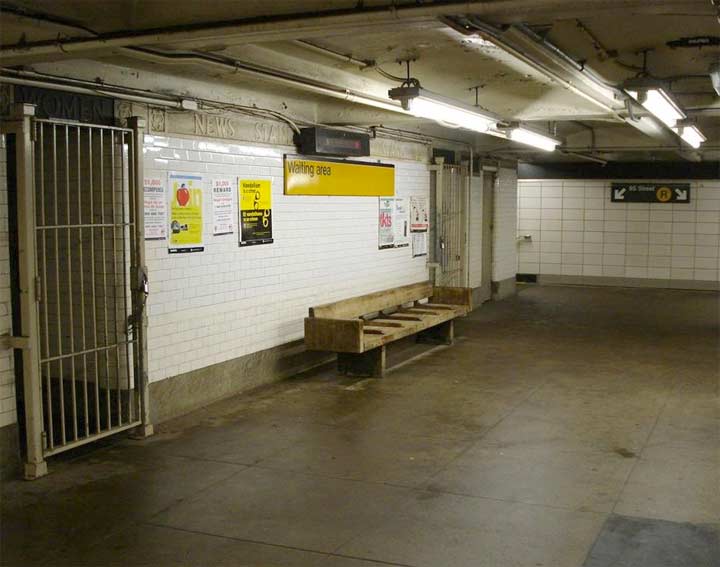 A terra cotta NEWS STAND sign remains in the turnstile area, though the actual newsstand was eliminated decades ago. Photo: nycsubway.org 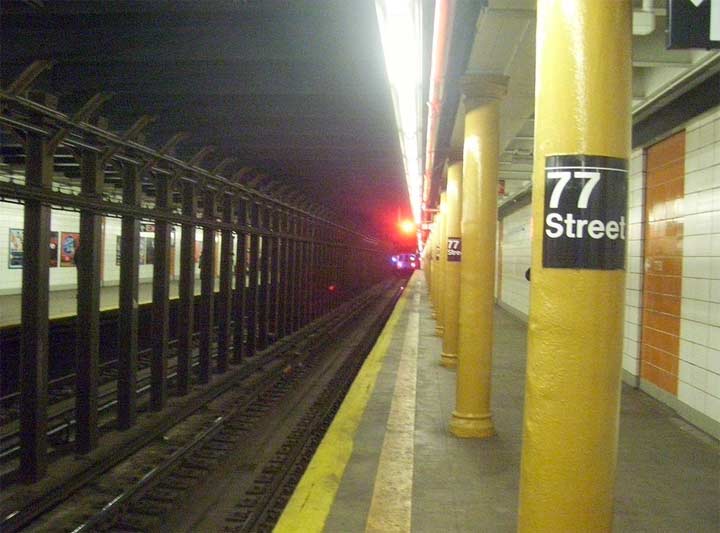 One more relic are the fluted tops and bottoms of the supporting columns, which are original 1915-1916 elements. Photo: nycsubway.org

At the local stations, most of the original mosaics & tile work are still there. They are simply hiding behind the “new” design with a wide gap in between. I would say it looks very much the same, with little damage, as it did when first constructed.

Lived two blocks from this station when I lived in Bay Ridge in the late 1960’s and early 1970’s. I miss the old oak turnstiles with their distinctive sound when passing through it. Many a journey to see the Mets at Shea began here, switching to the Sea Beach Line at 59th Street in Brooklyn and getting off at forty deuce to link up to the Flushing Line that took my and my friends to the game. Forever memories!

Thanks Kevin for your many contributions and dedication on all things New York!

Great read!
Spent the better part of the 50s and 60s living on 77th between 4th and 5th avenues. Played on those “spikes” with great relish. They made good foot holds for my adolescent feet. 77th street was a very busy block because of the subway station. Couldn’t play stick ball, Scully, Stoop Ball, Catch-a-flyers-up, Kings, or Buck-Buck during the 5o’clock rush hour. Had to time our games to avoid the crowds of returning Manhattan commuters. Like most things of one’s youth, never appreciated (or noticed) the intricate details so wonderfully pointed out in the article. Thanks.

Thanks for writing this! I was just in this station this morning, thinking, someone ought to look into the history of this place…

Im going to Google Map the address 77 Sunset Strip to see if it actually existed somewhere in LA.
Wish me luck

I used to take the RR train home to Bay Ridge at 86th Street station. Many a tired night coming home from the city, I would prefer to travel my entire ride from the 49th Street BMT station in Manhattan in relative comfort:.I had a seat…took a long time but well worth it..

If you look at the northbound and southbound station platforms at 77th Street, they’re not the same, because the northbound platform was designed to eventually be destroyed and replaced with trackage, if the Fourth Avenue express tracks had been extended south from 59th Street. Where the platform is now would have become the Manhattan-bound express tracks, a new local track and platform would have been built to the east, and provisions were made near 62nd Street, where there are two unused tunnels to the east of the pair used by the R train to pass over the old LIRR Bay Ridge tracks.

True – that’s why the second exit (76th Street) is only on one side of the street.