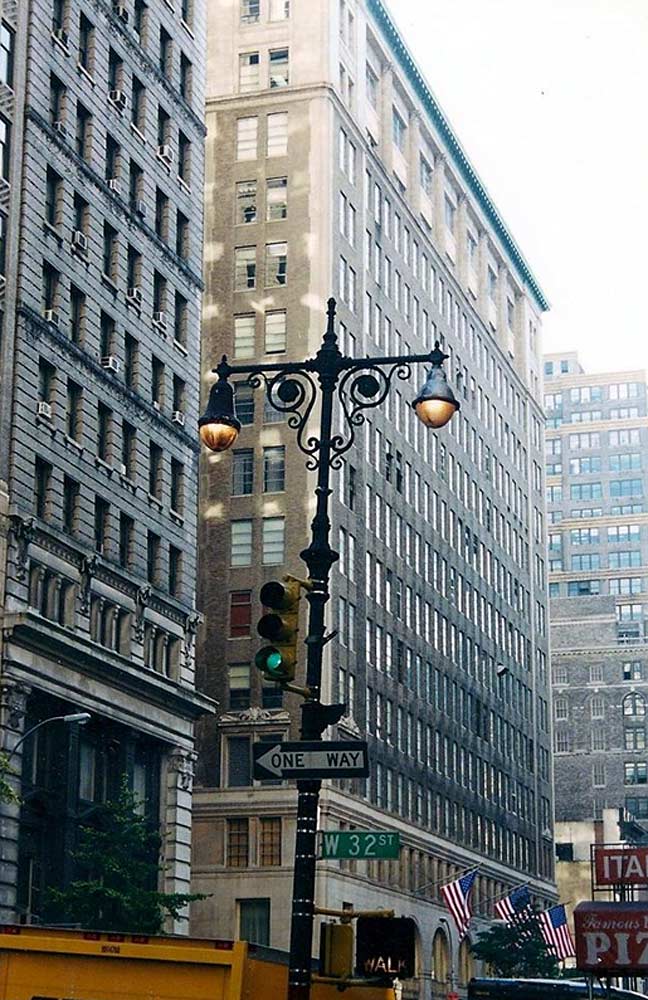 This Twin stood on the SW corner of 5th Avenue and West 32nd Street until approximately 2013. It’s a Twinlamp but not the original 5th Avenue design; apparently the molds for the originals, installed beginning in 1896, were lost, so when one was toppled the Twin deign that originated in the 1920s was used in its place.

Note that both incandescent bulbs are lit up; for some reason many remaining incandescents are allowed to dayburn. This was the rare remaining Twin that had both the “bell” fixture first installed in the late 1930s and also the Westinghouse AK-10 “cup” on the same pole.

Below the stoplight is the remains of the bracket that held a fire alarm lamp. It was damaged at an unknown date in the past.

By 2010 the lamp had been replaced with a stoplight stanchion, leaving the corner unguarded by an actual lamppost.

I took a look at Google Map and saw time line feature and checked, it was still there at 2010, and 2011, it seems the last time line it was there was in , it was off most of the times except it was lit at July 2011 time frame, but still there July 2012, but it was gone by August 2013 and a temporary traffic light pole was in place. A new pole was on in June 2014..heres a link provided

Go there, then slide the time line bar on the upper …you may have to move different angle for more time line options…