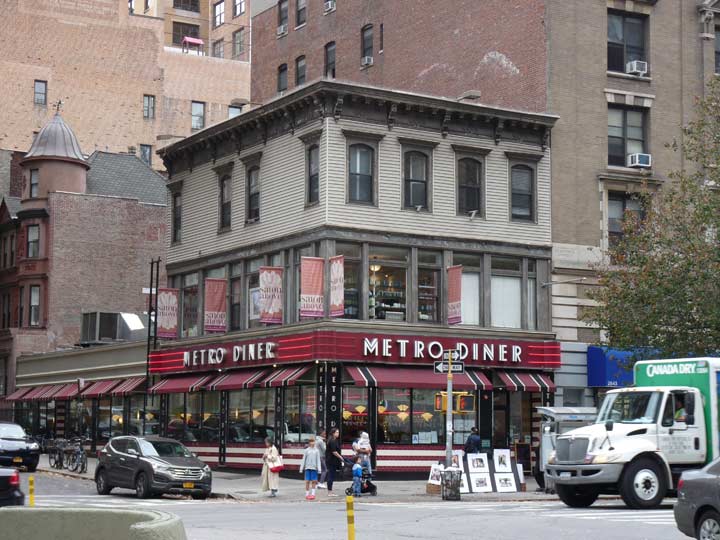 Today’s remaining woodframe buildings, of course, can remain standing and there is a handful left, most being in the Carnegie Hill area of the Upper East Side, with this lone campaigner remaining in the Upper West Side at Broadway and West 100th. It was built in 1871 by grocer Henry Grimm, and purchased in 1894 by millionaire beer baron Henry Doelger; in 1889 Matilda Doelger, Peter’s daughter, married a boxer named John West (of whom the family didn’t approve). The Wests had four children, one of whom, Mary Jane, entered showbiz in her pre-teen years, and you know her better as Mae West. Doelger’s beer hasn’t been produced since the Depression, but a magnificent stained glass window advertising the brand can still be found at Teddy’s, a popular longstanding hotspot in Williamsburg.

After the Depression a women’s clothing store and restaurant, among other businesses, occupied the ground floor, and the second floor gained large picture windows. The unaltered third floor was obscured by advertising billboards for decades and only recently has come to light again.

In 1991, the building’s owner, Samuel Rosenblatt, leased it to two diner operators, Hilos Fotios and Fanis Tsiamtsiouris, who opened the Metro, which still holds forth today. For whatever reason, this stretch of Broadway from 96th to 110th Street is chockablock with diners offering affordable food in this increasingly expensive part of town.

Much more at Daytonian in Manhattan.

in the mid 80s, it was purportedly owned by the father of one of the original beastie boys. the building was in very bad shape, with a number of broken windows and rotting timber. for a time, a small pack of semi-feral dogs were kept on the adjacent flat roof.

Yes, It was where John Berry lived and where they practiced in his third floor bedroom, as referenced in the Beastie Boys Book, page 50.
Beastie Boys. (2018). Beastie Boys Book. 1st ed. Random House Publishing Group, p.50.