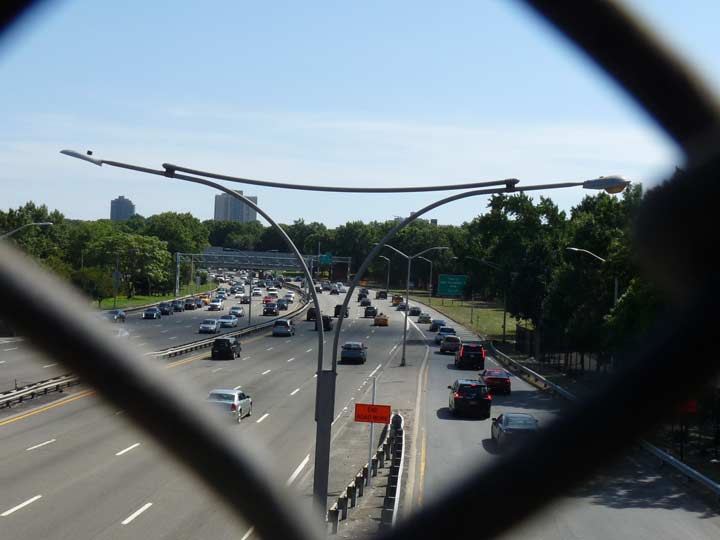 Excuse the presence of the chain link fence in this shot, but the only way to shoot this increasingly-rare bracketed double Deskey still hanging in there on the Grand Central Parkway just south of the Long Island Expressway was through the fence on a pedestrian overpass.

The Donald Deskey lamp, first introduced in 1958, proved especially adaptable. There is the single Deskey, used about 90% of the time, and variations on the theme such as the double Deskey with two masts that comes in a long and extra-long variation have been used, as well as the deluxe Twin version used on Manhattan’s 5th Avenue, and then there’s this iteration, a twin version used for the most part on expressways or very wide streets. Most of these have been eliminated over the years, but I have spotted one or two on Kings Highway in Brooklyn, and I also saw some in a news story about Rikers Island, which I hope I never have to see close up.

If you’re not aware, the lamp fixture without a diffuser bowl is a light-emitting diode lamp; they have just about taken over the expressways and parkways, and another version by a different manufacturer is gradually being installed all over NYC with the job projected to be complete by 2017.

In my experience LED lamps emit a more unidirectional light than do incandescents, so I’m surprised by the lack of diffusers with them.

REST IN PEACE TO ALL NYC’S OLD STREETLIGHTS!! SO MUCH FOR THE VARIATY OF LIGHTS!!