ForgottenTour #101, the last of the 2015 season, was held on a brisk Sunday, November 8th, 2015 in what was one of your webmaster’s neighborhoods in earlier days. 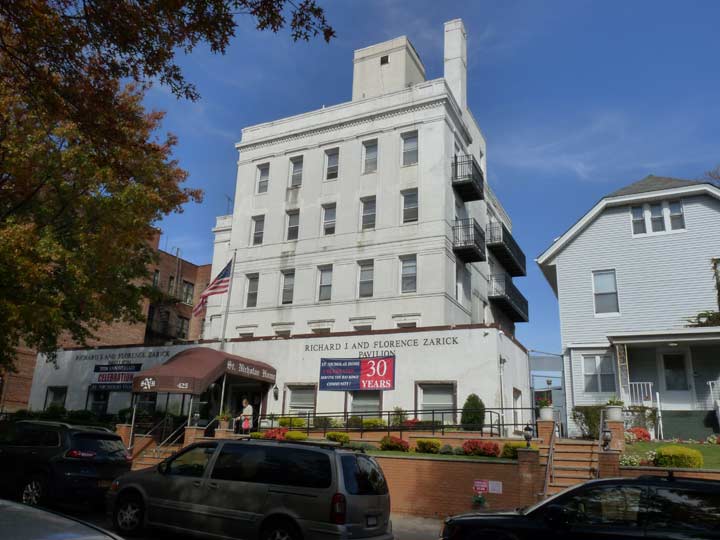 Ovington Avenue is one of Bay Ridge’s oldest cross streets, and it meanders gently against the grid that was later laid down around it, so it was never assigned a number. The Ovington family farm was located in the area since just after the colonial era; a group of artists and artisans purchased the farm in the 1850s, calling it Ovington Village, and Ovington Avenue was the road between the Athenaeum (concert hall) and the village. It was later built up and lined with spacious homes on 400-foot-wide plots. Family scion Mary White Ovington helped found the NAACP.

St. Nicholas Home, 425 Ovington, is a former nurses’ training facility; this building has been here nearly a century. 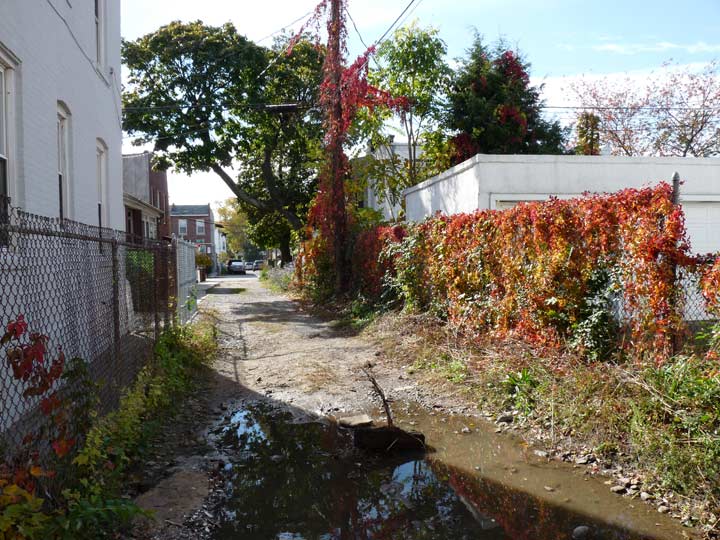 At present Stewart Avenue runs two blocks between 74th and 72nd Streets, and again from 71st to Ovington. It had run continuously but in about 1981-1982, tract housing was built on the segment between 71st and 72nd. It’s a mostly unpaved or dirt road from 72nd to 73rd but a close looks reveals that segment had been paved decades ago. The portion between 71st and Ovington survives because it’s used as a driveway by the owner of an adjacent house.

In 1873, pathways from the colonial era were still the only way to get around, as the area was dotted with family farms and villages such as the Ovington settlement. The well-to-do were already building large estates along the shoreline as the black squares along Shore Road indicate. The present street grid was being surveyed in 1873 and while most east-west streets are not even shown yet, 2nd, 3rd and 4th Avenues were already in place, with a  horsecar line along Third.

Remarkably, the street still exists today, one of the only unpaved streets in NYC. 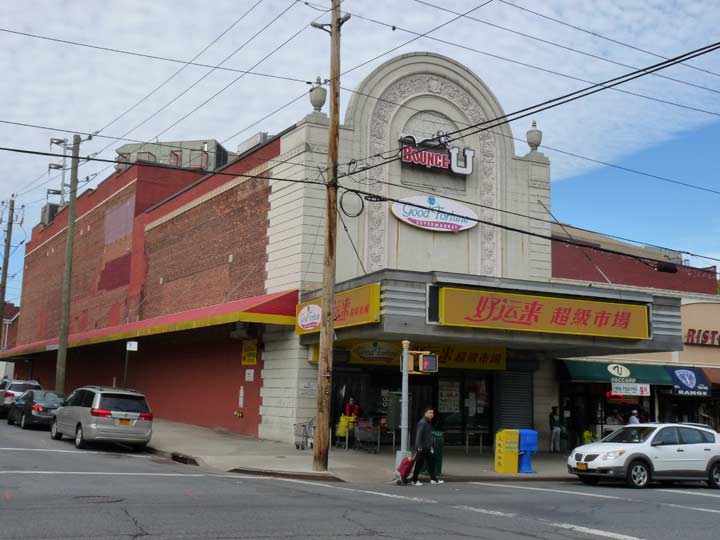 Opened on October 21 1927 with Pat O’Mally in “The Rose of Kildare” plus four acts of vaudeville on the stage. This medium sized movie theatre had a beautiful Atmospheric style interior, where electric stars used to twinkle on the dark blue ceiling. The Fortway Theatre originally had a Kilgen theatre organ. There was a small stage in front of the proscenium. The theatre was triplexed in the 1970’s, and divided into a 5-screen multiplex in 1982.

The Fortway Theatre was closed by Loews Cineplex in June of 2005, and in June 2007 it was converted into a supermarket. –cinematreasures

Like many theatres, the Fortway doubled as a concert venue; Chuck Berry appeared here in 1972 touring behind his only #1 hit: “My Ding-A-Ling.” 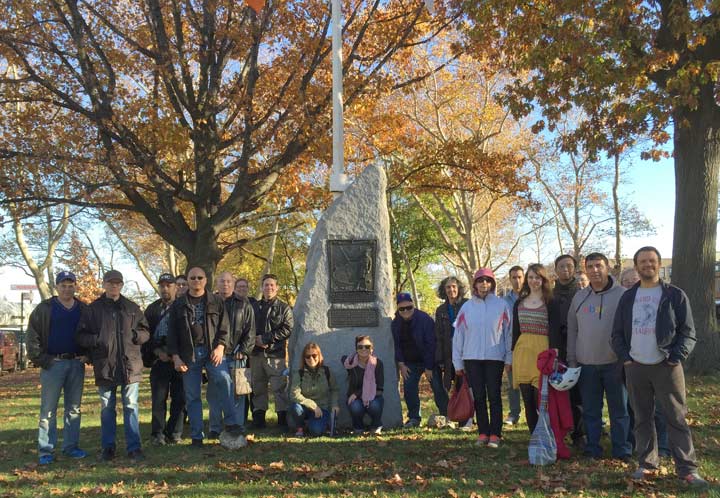 ForgottenFans gather at Lief Ericson Square’s runestone plaque, erected in 1939. Crown Prince Olav, who ruled as the popular Olav V of Norway from 1957-1991, dedicated this replica of a Viking rune stone in Tune, Norway on a 1939 visit. The stone stands on Leif Ericson Square just east of 4th Avenue. (Tune, southeast of Oslo near the Swedish border, was incorporated into the town of Sarpsborg in 1992.)

The photo of the building on Ovington Avenue is the former Bay Ridge Hospital. I was born there in mid summer of 1970. There is a photo of it on my Certificate of Birth. The building looks very much the same then as it does today (2015). Hardly any alterations to the exterior; I like that !

I had suspected it was a hospital!

I was born at the Bay Ridge Hospital in April 1948. I had assumed the building was gone by now. Dr. Flickinger, who delivered me, was also our family practitioner, and he did my hernia surgery at Lutheran Hospital in the 50’s.

I used to catch the bus on 65th st. near the Fortway Theater when I attended Fort Hamilton HS. Glad to see the Ericson monument is graffiti free. I hope you post a picture of McKinley Park, slid down that hill quite a few times on a sled in the early 60’s.

The McKinley Park slope was an ant-hill compared to the “mountain” at Owl’s Head Park! Just sayin…..

Bliss Park a.k.a. Owl’s Head is a pretty good ride, but….when the snow was just right you got a hell of a ride from about 6th avenue (in the park) down the stairs passed 5th avenue right down 43rd street in Sunset Park. With a little ice you could almost make 4th avenue. Of course you had to time the traffic if there was any. What a ride!