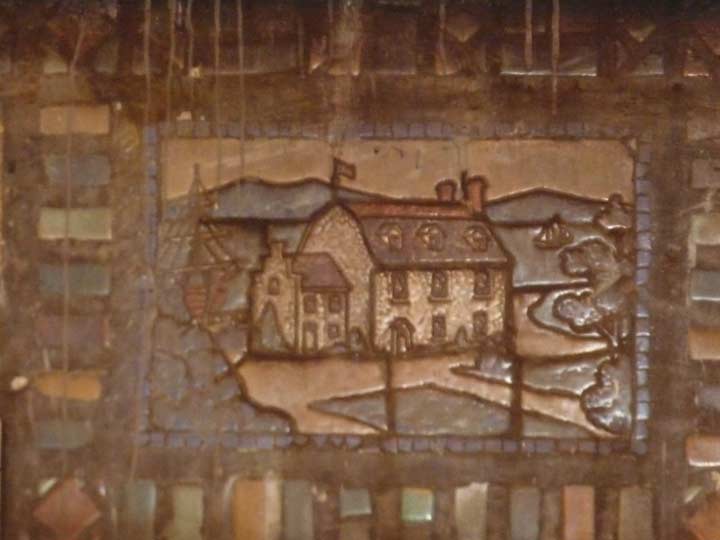 Seen at regular intervals along the walls at the Whitehall Street BMT subway station serving R trains, the first or last in Manhattan depending on your direction, are these terra cotta depictions of a white mansion, with the Hudson River in the background, a sailing ship at left, and a wide lawn in front. Obviously this is the White Hall of Whitehall Street. But what was it exactly?

The building, as well as the street, are named for Peter Stuyvesant’s mansion, which was constructed in 1658 when he was Director-General of New Netherland. However, Stuyvesant didn’t give it that name. After the British took over New Netherland in 1664, they mockingly named it Whitehall, for London’s Palace of Whitehall, where Britain’s monarchs lived from 1530 until it burned down in 1698. Thus, Whitehall Street is one of the few street names bestowed by the British to remain unchanged after 1783 when they finally evacuated Manhattan after ceding government to the USA.

The plaques are lovingly rendered in an “Arts and Crafts” style, surrounded by colored tiles, rectangular except for diamonds at the corners. Though the MTA gave the Whitehall Street station a makeover a decade ago that includes spotlights shining on the mosaics, all are subject to water damage and have had their once brilliant colors fade over the years.

The erudition FNY constantly displays regarding topics such as this — and others, also — always astonishes me. How does Kevin do it?

I remember seeing that when it was in better condition back in the 50’s.. At that time, two trains ran from Brooklyn 24/7..The 4th Avenue local or R as it was later called and the Brighton local..I forgot what that later became….I also remember how damp that station felt being so close to the water…..and the Montague Street tunnel….