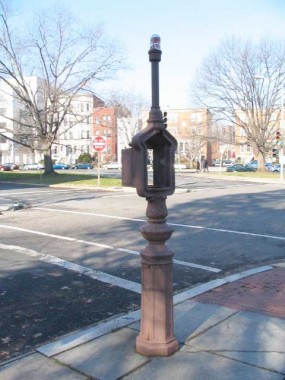 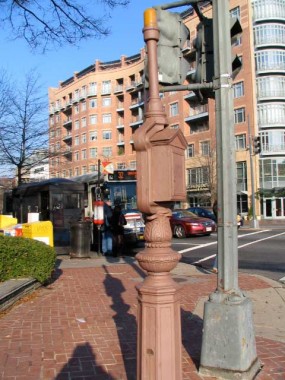 Fire call boxes had a simple pole and protected light on top, which was constantly illuminated to aid public and police in locating the boxes at night.  Fire call boxes provided a protected switch for residents and pedestrians to pull in the event of a fire, signaling the department in a central dispatch office that a fire had been spotted in that particular block.  These boxes were painted red, and identified with a unique number for identification.  By the early 1930s newer fire boxes were used which added a quick action door on the front – the user simply pulled down the door and pulled the hook to send in the alarm. —House History Man

In an interesting case of parallel evolution, the boxes were first identified by a lightbulb in clear red glass; this later became opaque white glass and then cylindrical orange plastic, much as NYC’s did. 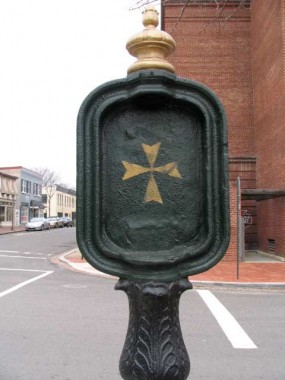 Washington also had police call boxes; these had telephone handsets within and an officer could open the box with a key. Fire call boxes had “house-shaped” or peak-roof frames — older NYC call boxes are shaped like that, too. Police boxes had curved tops are were originally painted blue. The maltese cross is often used for identification by police and fire departments nationwide.

WHATEVER HAPPENED TO INNERWYCK? — Flushing