WHATEVER HAPPENED TO INNERWYCK? — Flushing

With the ongoing public debate going on regarding the future of the Steinway Mansion, whose yard space has been reduced and is being developed into warehouses, it is an ideal opportunity to look back at another old-time Queens dwelling that did not make it… 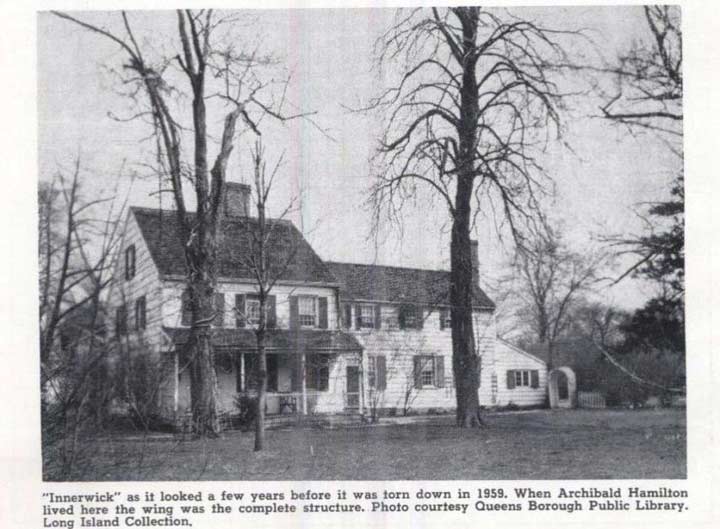 Innerwyck was the second-oldest residential structure in the borough after the Bowne House. It stood at the corner of Union Street and Bayside Avenue, two ancient roadways that predate the numbered street grid of Queens.

Built around 1670, it played a vital role during the American Revolution. Burned in a Christmas 1779 fire that was blamed on local patriots, it was quickly rebuilt by its loyalist owner, Colonel Archibald Hamilton. As with its owner, the building’s name has Scottish origins. Hamilton was born in 1735 near Innerwick Castle in the East Lothian region of Scotland. His wife was Alice Colden, granddaughter of Cadwallader Colden, New York’s last colonial governor, whose Spring Hill estate stood on the site of present-day Mount Hebron Cemetery.

In 1783, Hamilton and other loyalists fled as the British departed the former colony. A 1939 article by Long Island Star-Journal describes him as a ringleader in a failed plot to assassinate George Washington. 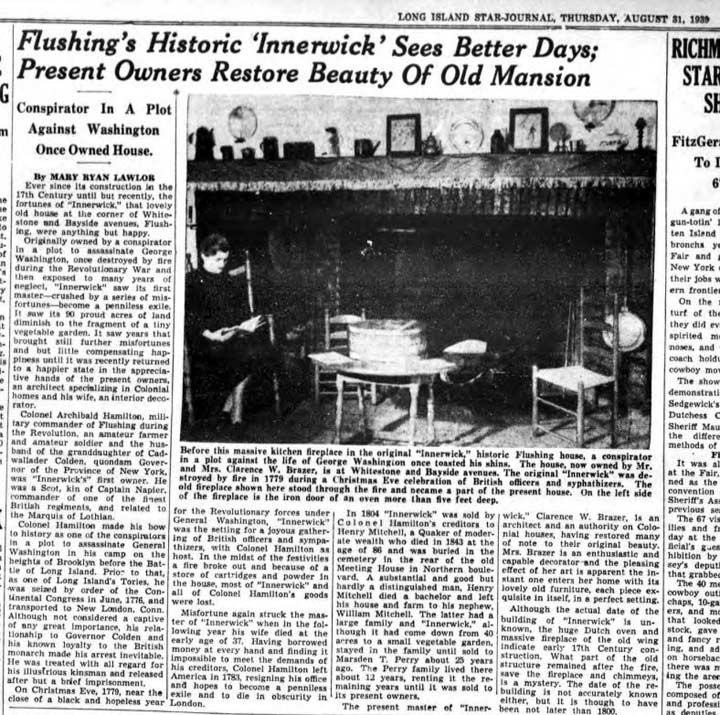 In 1804, the home was purchased by the Mitchell family, whose name was later bestowed on the Mitchell-Linden Gardens apartments that now stand across Union Street from the former mansion. The Mitchells farmed their property until 1921.

An optimistic Long Island Star-Journal article from October 1945 describes the restoration of the house to its pre-revolution appearance. “Landmark in flushing,” the headline shouts. But back then, there was no landmarks law in the city. The City’s Department of Records also visited the house in that month, taking photos of historical reenactors sitting by the fireplace. That month, the home celebrated the tercentenary of Flushing.

Its last owners were architect and philatelist Clarence Wilson Brazer and his wife Esther, a prolific interior decorator, who lovingly restored the structure together. She died in November 1945 and her husband followed in 1956. In 1959, the house was unceremoniously demolished and replaced with a squat two-story structure containing medical offices. 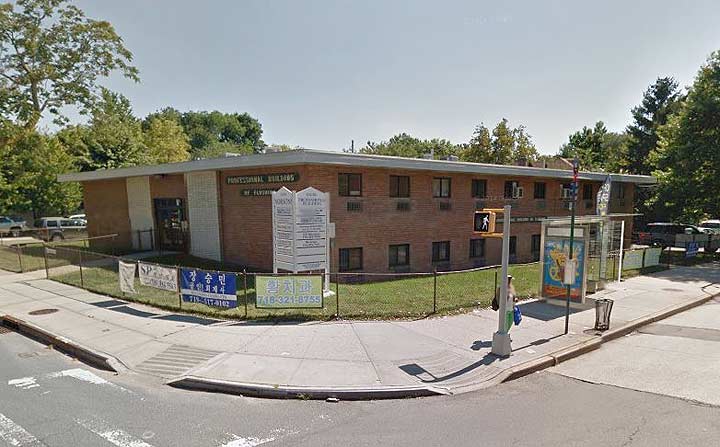 Most of its tenants these days are from South Korea, but looking at the plain modernist architecture, the building looks more North Korean than southern. So is there any trace of Innerwyck still standing? If so, perhaps it’s on the northeastern side of the medical office on Bayside Avenue, where a remnant of a stone gate stands as an apparent architectural folly. 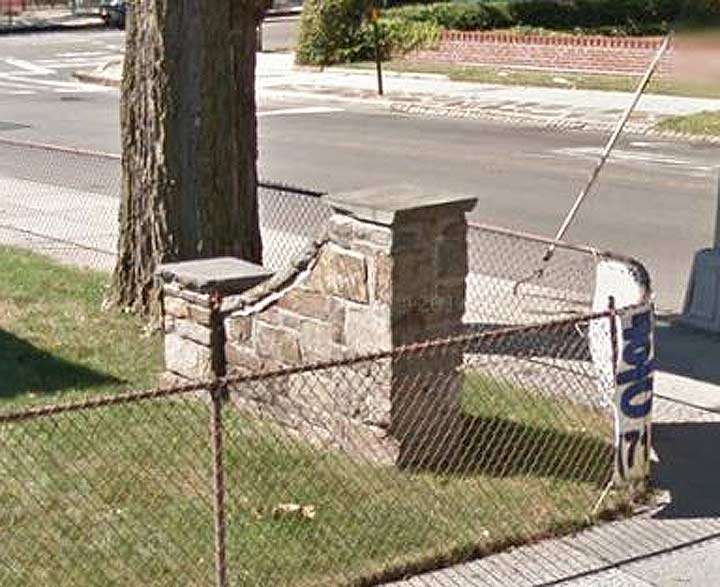 That’s all that’s left of Innerwyck, a storied structure that graced Flushing with its beauty from 1670 to 1959.

Sergey Kadinsky  is the author of the upcoming Hidden Waters of New York City, to be released in March 2015 on Countryman Press.

My parents moved to the Mitchell-Linden community across from Innerwick in 1958. I was not born until 1960, so I have no personal recall of the lost historic home. In fact I was not aware of it until reading this excellent article. I do recall the building which replaced it, as it is where my dentist was located as a small child. I also recall at the time, the many beautiful, substantial, pre-war single family homes which lined Bayside Avenue, between Union Street and Parsons Boulevard. In looking at Google maps street view, I sadly see that many of those homes have been replaced by bland brick houses on subdivided smaller lots. Innerwick is yet another sad chapter in the urbanization of the formerly small town suburban flavor of a Flushing that no longer exists; except in pockets like Broadway-Flushing, which New York City has still failed to landmark, despite State and National recognition. The City of New York needs to wake up and start treating the borough of Queens with the same respect towards historic preservation as they do elsewhere in the city, otherwise they risk the further loss of irreplaceable architectural and cultural resources.

would you know anything about the fitzgerald /ginsberg mansion on bayside ave. people that visited years ago said that down the basement behind doors were endless tunnels. they were seen by my daughter. until this day i have never heard of what they were. can you help?

The Innerwyck house should not be described as a “Whitestone classic.” Its location is well within the boundary of Flushing. My 1873 Map of Queens shows that Whitestone and College Point boundaries are close but no cigar,

I think it’s on the present border.

My 1910’s Innerwyck postcard, which is same as that is pictured at the top of your article, states “Flushing, N.Y.” as its location. The house might have be “on the boundary” but it was still on the Flushing side. So give Flushing the glory.

I made a mistake. Cadwallader Colden was not the last colonial governor of New York. He ruled prior to the Revolution. During the war, William Tryon ruled the British-controlled parts of the state as governor. His name appears on Fort Tryon Park.

Innerwyck wasn’t in Whitestone…it was at the corner of Bayside Avenue and Union Street in Flushing. Whitestone starts just north of 26th Avenue.

Demolished in 1959 after multiple pleas to save it through relocation by local press and residents – the owners were giving it away for free, and this is before the Landmarks Law existed – it became just another lump of landfill. The mantlepiece from the fireplace is in storage at the Queens Historical Society. Replaced by a one-story professional building. A great loss for Flushing and the city as a whole.

The Mitchell family owned much of North Flushing until the 1930s. Over 100 acres to the immediate north of Innerwyck east of Union Street belonged to the Mitchells; the “Old Country Club” of Flushing, one of the oldest golf clubs in the United States, was located there, going out of business during the Depression. The landmarked Fitzgerald-Ginsberg-Carelitz mansion, a superb Tudor mansion on almost an acre on Bayside Avenue between Parsons Boulevard and 146th Street, was the original putting green for the golf club.

The “mansion” that you’re referring to was located at the top of the hill at about 27th Avenue, and later became the headquarters of the Jefferson Democratic Club prior to its demolition. Both that portion of their large holdings near the mansion as well as the rest of the area to the west of Union Street – also owned by the Mitchells – was sold to developers in the 1950s for the Mitchell Gardens apartment house development.

I was searching the internet to find out information about “The Old Country Club” and your above post came up on google. My grandfather lived in East Elmhurst in the 1920’s and I was going through some of his old possessions and I found a trophy from the Championship at “The Old Country Club”. The trophy indicates the tournament began in 1930 and the last winner was in 1935. From my research, it appears in April of 1936, the Mitchells sold the property for housing developments, which is why there are no winners after the 1935 season. The trophy says on it, “presented by J.F.B. Mitchell, which makes sense! Believe it or not, the last winner of the tournament was THE Bob Hope! Trying to find out as much info about this golf course and this trophy. Any more info would be greatly appreciated! Rnico02@gmail.com

No wonder that direct across present day Union Street is P.S.214Q Cadwallader Colden School. I was in the medical building in the late 1980s at one of the dentists to get an extra tooth removed. I waited on that corner every weekday morning for 3 years to catch the Q44 (or sometimes the X32) bus to Bronx HS of Science.