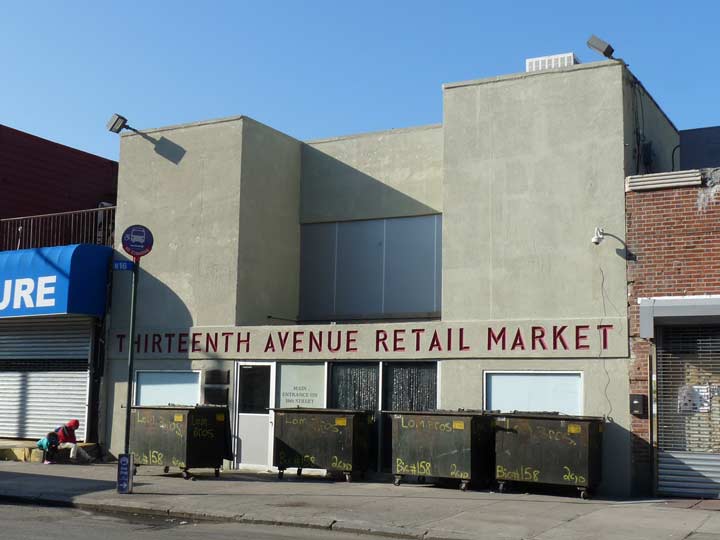 While open-air markets have mightily multiplied in New York City in the last 20 to 30 years or so (the farmers’ markets in Union Square and Grand Army Plaza in Brooklyn, for two instances, as well as the Brooklyn Flea and other varied “fleas”), there was a time when they were considered unsanitary and undesirable, not just the large ones that fill empty lots but even the lone entrepreneur with his pushcart. Among the reasons for this is that these markets were unregulated and visited rarely by health inspectors. After NYC’s former Department of Markets was established in the 1920s, things improved somewhat but not enough for Mayor Fiorello LaGuardia when he took office in 1933.

The Little Flower spearheaded a Works Progress Administration initiative to build indoor markets throughout the city to improve sanitation and make inspections easier. These markets’ design was very simple, no-frills Machine Age, with no ornamentation whatsoever, and sanserif lettering on signage. There are a few of these left — the original Essex Street Market near Delancey is still standing, though now endangered, and the 1st Avenue Retail Market infrastructure remains in place, though an apartment tower has been built over it and the market space is now Theatre for the New City.

The Thirteenth Avenue Retail Market is still looks almost the same as it did when it was built in the late 1930s, though a small central sign saying “City of New York Department of Markets” has been removed. The 13th Avenue facing is no longer the main entrance, though… 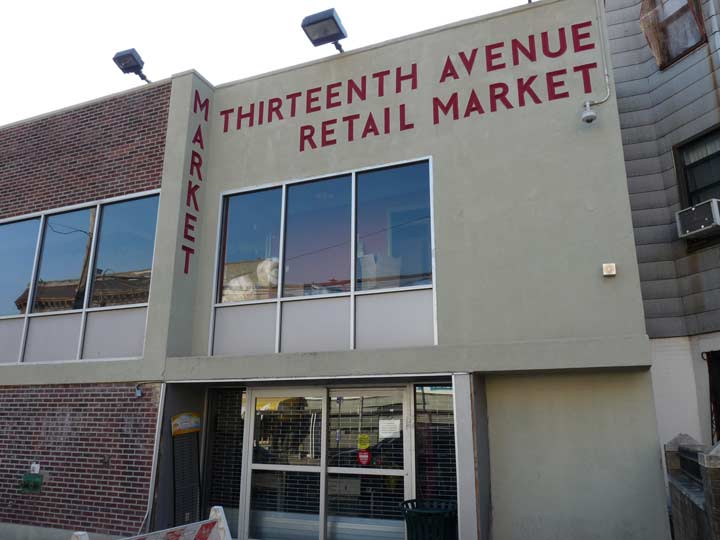 A recently “improved” and upgraded entrance has recently been opened on the 39th Street side, and the market also has a 40th Street entrance that is usually covered by newer signage. All three, though, surprisngly still demonstrate a minimalist, some would say grim, Depression-era design.

Is the retail market on Arthur Avenue in the Bronx still standing?

This is absolutely incorrect. It is home to ONE large upperclass supermaket, Gourmet Glatt Market.

I remember going to 13th Ave. market with my grandmother she would buy her cheese there I loved watching the cheese man you would tell him how much you wanted he would score it put the knife in and weigh it and it was always the exact amount my grandmother wanted this always amazed me I also liked walking around there and just looking at all the different sites and items like fresh fruit at the deli there was a place that you could get a soda and I think something to eat it was an experience going there we did in the far my grandmother lived on her 37th St. and 12th Ave.

It was an amazing market. Indoors. No worry about the weather elements. There was the pickel lady Solded
pickles from large barrels. Rose the stocking lady. Lena and her son Perry the hot bread lady The soda fountain that sold Lime Rickies. Toddy who sold vegetables. The butter and cheese man. There were many other vendors. Many clothes and socks
There were also many Holocaust survivors who shopped in the market. I question as a kid why people had
numbers printed on their arms.
It was an experience.