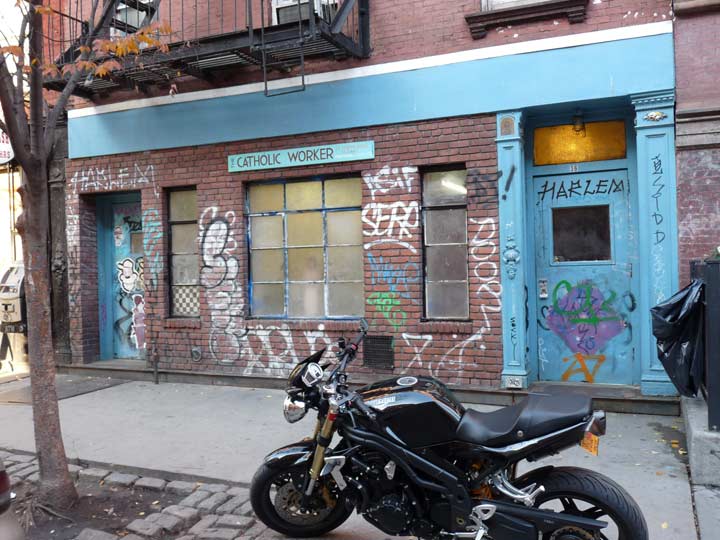 A nondescript brick building at 34-36 East 1st Street is panted light blue and marked with a sign saying “The Catholic Worker.” Here social activist and convert to the Catholic Church Dorothy Day (1897-1980) initiated the St. Joseph Hospitality Church, a soup kitchen/hostel/office for the publication of The Catholic Worker newspaper in 1967. Day took the paper and Catholic Worker’s operations to nearby 55 East 3rd  in a building known as Maryhouse in the 1970s, but this building still offers a small amount of rooms and opens up to area destitute for soup from Tuesday through Friday at 10AM. For several years Day herself resided in wouthwest Staten Island in a hosuing project set up by Spanish immigrants in the mid-20th Century; it was razed in 2000. 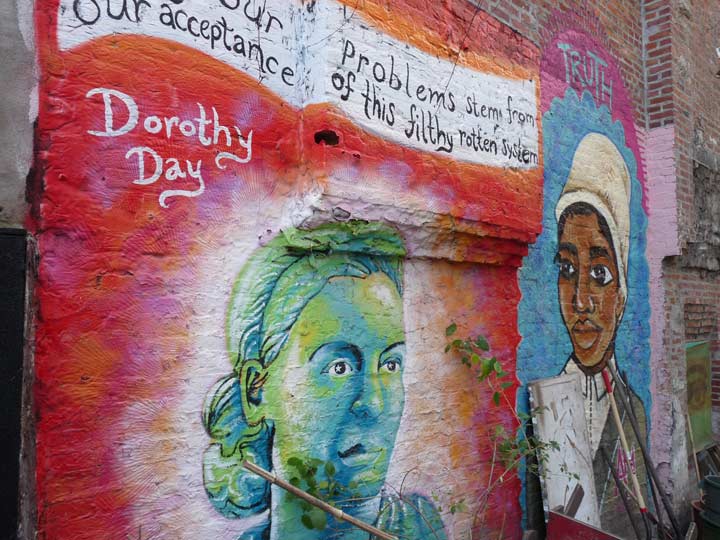 Dorothy Day’s image is painted in a nearby East 1st Street building with one of her quotations, “Our problems stem from our acceptance of this filthy, rotten system.”

The term housing “project” where Day lived is misleading. It was called Spanish Camp and was a group of bungalows.

Ms. Day also lived in Spanish Camp and nearby Prince’s Bay for almost 60 years (on-and-off) which is a lot longer than “several” years. She loved Staten Island very much and is buried in Resurrection Cemetery in Prince’s Bay. An interesting note that beside Ms. Day, Staten Island played a rather important role in the lives of Elizabeth Bayley Seton (America’s first native-born Catholic saint) and Father Vincent Cappodano (currently in the process of being canonized, which is very close to happening). Three out of four native-born American Catholic saints (if Ms. Day and Fr. Capoddano make the cut; Katherine Drexel of PA being the fourth) would all have been born and/or lived on Staten Island!

Day initiated the St. Joseph House of Hospitality (not “hospitality church”) in 1934 at a different location. The first issue of the newspaper was published on May 1, 1933. The Catholic Worker archives reside at Marquette University. Inquiries and visits welcome!

If the CW is part of forgotten NY, it is certainly not a movement whose best days are past. The 10 – 20 Hospitality Houses active when Day was alive have increased into the hundreds, located in cities and towns all over this country and now others too. The houses in NY still host regular speakers nights that provide intellectual provocation and moral debate. Having lived and worked at the CW 50 years ago and followed its evolution since, I assure you that there is nothing quaint about what it does or what it offers to those who engage with it.

I was not making a value judgment

It is heartening to read that the Catholic Worker is alive and well, and bringing aid and comfort to people in need. I knew Dorothy Day and Ammon Hennacy. They are heroes of mine. I would love to find some meaning in life helping out in this or some other worthwhile project.

I have only now heard of The Catholic Worker by my cousin Skip Courtney. His brother
Bud Courtney is very active in this ministry for the
homeless in NYC. Would be interested in seeing
this amazing ministry at work. I pray for all who are
Called to this work and mission
In His name, Eiizabeth Courtney Huisman

I remember Dorothy from my childhood. The last time I saw her was in 1968; I was still a teenager. I went last year to visit her grave over by Prince’s Bay in Staten Island a few months ago. It was good to see that flowers had been left there. Thank you for mentioning her on your website. I love Forgotten New York!

My name is Asa and I work for Bill Moyers. We’re publishing a piece on the King’s Bay Plowshare 7. We’d like to use your photo of the mural above with credit to you of course.

Attaching my contact here so you can respond directly! Let me know, and thanks for putting up your amazing work!
-Asa
burroughsa@moyersmedia.com