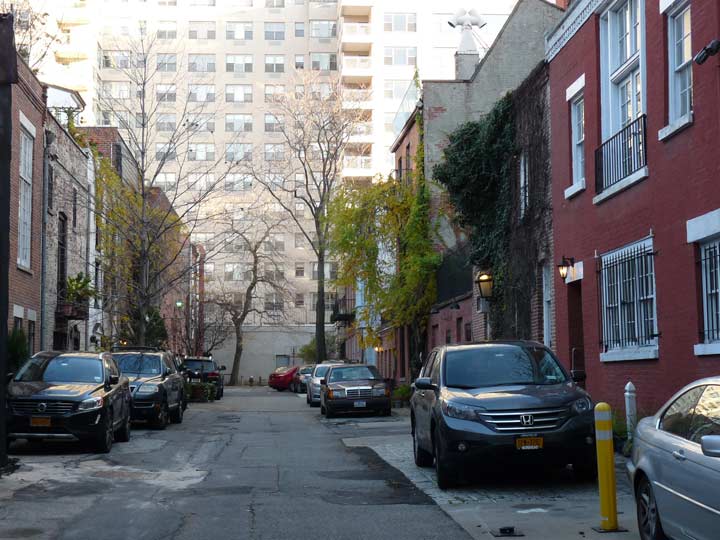 I have been a-mews-ing myself lately (ugh… I know…) by revisiting Manhattan’s and Brooklyn’s mewses, or short lanes that formerly held stables that were later converted into homes (many of which now sell in the millions). The concept began in Britain: at a conference I was appearing at in Calgary a few years ago (I wish I was invited to more of them) I met a British fellow, Sebastian Dekker, who wrote an entire book on the concept.

MacDougal Alley, one of these mewses, is a dead-end on its parent street just south of West 8th Street. For all my visits, the gate has been tantalizingly shut. Some of the Village’s mewses have gates that require a key for entry (such as MacDougal Alley and Grove Court, which is technically not a mews); others like Patchin Place and Washington Mews, have gates that are generally open; and others, like Gay Street, are through streets open to traffic. So, all of my pictures of MacDougal Alley over the years have been  at the gate and using my zoom lens to get a better view. My current camera has an 18X zoom, so this is the best I can do at the moment. I can’t get shots of individual carriage houses.

The mews in the past has been home to artist Jackson (Jack the Dripper) Pollock, poet Edward A. Robinson, and sculptor Gertrude Vanderbilt Whitney, founder of the Whitney Museum. Reportedly it was the last NYC thoroughfare lit by city-maintained gaslamps; one remains in Patchin Place, though it now holds an electric lamp. 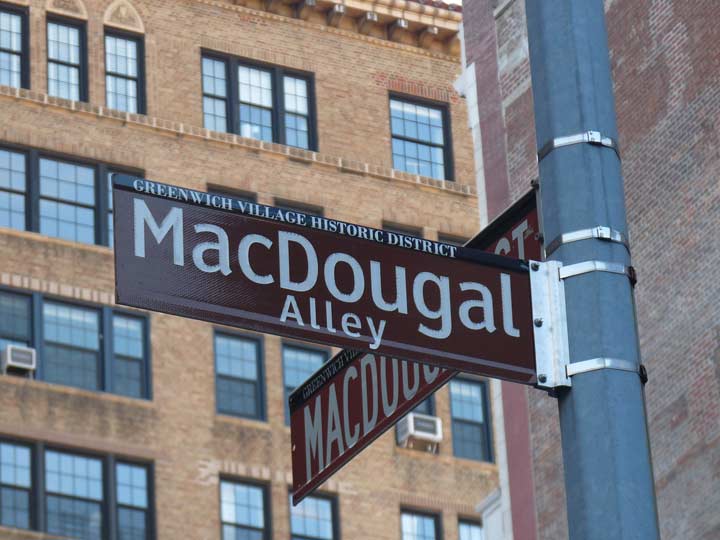 The alley and street were named for Scottish-born Alexander McDougall (1732-1786), an original Son of Liberty who was clapped in prison in 1770 for writing a pamphlet denouncing restrictions the British had placed on trade in the colonies. He received so many visitors that his jailers had to make an appointment list. During the Revolutionary War he rose to major general, later represented New York State in the Continental Congress, became  a state senator and the first president of the Bank of New York. The spelling of his name has evolved from McDougall (his father’s spelling) to McDougal to MacDougal. Info: Henry Moscow’s Street Book.

The New York Times (2-26-42) has an article ,” City’s Gaslit Era Finally Flickers Out As Macdougal
Alley Lamps Are Shut Off”. It seems the two gas street light fixtures that were attached to # 8 and # 15 in the alley were not removed when gas street lighting was eliminated in 1929. In 1933 one of the residents requested that Consolidated Gas relight the two lamps, which they did,but left them burning 24 hours because of the expense of sending someone to shut them off.(The last two of the original five hundred lamplighters were laid off in 1929.) Blackout restrictions required The utility to shut off the gas,but it was hoped that they would be turned back on when the war ended.
It would be interesting to see if any of the gas pipes or mounting holes for the lanterns are still there.

Thanks for the interesting site. Do you have any information on 10-1/2 MacDougal Ally (the roundest building)?

I am very interested in GV history. Have been a volunteer with Big Apple Greeter for 11 years, and live on West 3th Street

Dos anyone have any information on a “Blossom Griswold” whe dwelt at #21 MacDougal Alley in 1922 or 1924? I believe a Lieutenant W.E. Griswold dwelt there as well.