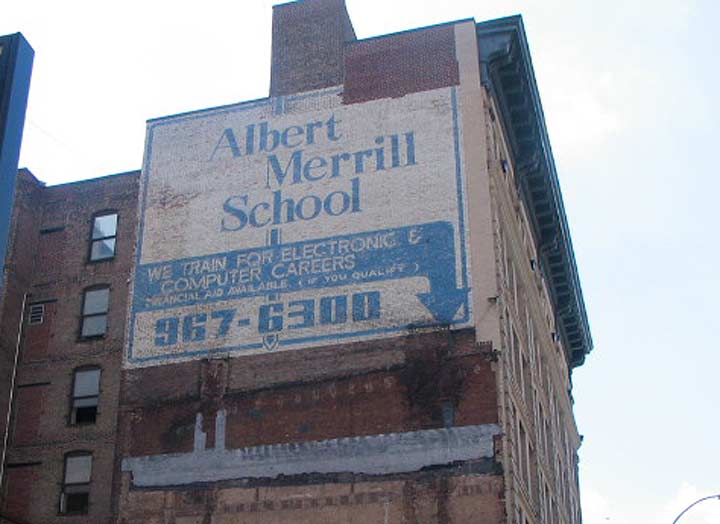 In 2014 the last trace of the Albert Merrill School vanished as this ad on West 29th Street near 8th Avenue was painted over. The school promised training in computer tech on the state-of-the-art machines in the 1970s and 1980s.

The school was heavily advertised on local TV in commercials featuring pitchman Jimmy Randolph — who everyone seemed to recognize, though I didn’t. “Sir James” was a recording artist who also appeared in stage shows such as Guys and Dolls. Here Jimmy sings “Summertime” and “Miracle After Miracle.”

In this commercial, a young woman asks Mr. Randolph for directions to AMS at Columbus Circle (you can see some of the Coliseum, torn down in the late 1990s) and he takes her in a tour of the school. Note the phone number at the end with a CI interchange (stands for CIrcle).

As for Albert Merrill, long before he started a computer tech school, he invented a new form of shorthand writing. The school was later successfully sued for admitting clearly underqualified students that could not pass its courses. I’m not sure when it closed down.

I attended Haaren H.S., now John Jay College of Criminal Justice from 1967-1970, only a few blocks away from AM Institute. I remember that there was a branch of the Albert Merrill School on 60th Street, between Columbus Avenue and Broadway.

Computers at that time was a total foreign concept for most people. It was something that was used in business or industry, not the home . Who would da thunk that we all carry around computers in our pockets or pocketbooks. They’re called cellphones.

I remember that commercial! We found a lot to goof on – the girl recognizing Jimmy Randolph, by name, as the school’s pitchman (I had no idea he had “real” fame as a singer), and where, when she asks about financial aid, Jimmy turns to the camera to answer the question instead of speaking to her. We also thought it would have been funny if the part where she asks how to get to the school was filmed right in front of the school, then Jimmy would have pointed it out to her and go all Sam Kinison on her for not knowing where she was.

their a bunch of nots short order crooks of our society

& thanks to all the job development since then…………….thank society

I attended Albert Merrill Institute on 60th St just down from the Colisseum. It was Spring/summer of 1968, I think. We took some lessons in Central Park on nice days. One time, our instructor came back from lunch drunk. I dropped out soon after. The tuition loan was arranged by the school through Freedom National Bank in Harlem. It wasn’t a great school, but it wasn’t a scam either. I remember “Joe”, an older guy from New Jersey who was switching careers into the new field of computers. I hope Joe did ok.

It helped me get into the Computer and Printer repair business . I eventually ended up working in the IT Computer field and I and still working IT .

Albert Merrill – Trade School did help me find a job that I liked .

The school helped me get into a new and exciting career in the 80’s,
I flourished in the 90’s and then got on a rollercoaster ride after 911, the fact that India does everything cheaper does not help. AMS was definitely a good move for me at that time, I wish i would have became focused on the CISCO craze at the appropriate time, another trend that fell.

The Albert Merrill School is referenced in The Venture Brothers cartoon on Adult Swim. A character named Brock Samson is in the catacombs of the Vatican. When his partner trips the alarm, Brock gets frustrated and on his communication device says ”Where the hell did you get this guy….the Albert Merrill School?” I didn’t get the reference until just now.

I graduate from the same location in 88 I landed a job in NYC back in the days in Computer Factory Inc and still a great technician today I have great memories I did 3.80 average perfect attendance and student most likely to succeed award that’s exactly when I learned how to believe in myself

I went to AMS back in 1978 I enjoyed the classes, it was something different . I got stuck with a loan, in which I paid 25 yrs and $3000 in interest later

The Venture Bros. Adult Swim TV Show brought me here! With references to people like Action Johnny (Quest), many episodes all the way up to Season 7 have an assortment of culture embedded within!

Likewise! It’s amazing how much you can really learn from these esoteric adult cartoons. Theres more truth in them than the mainstream news

I attended this school and got a great education. What you put into this education is what you get out of it. It was the start my journey of technology !!!The school offered a great start to a great career.

I am so glad to get in touch with Albert Merrill Institute. I answered one of those TV ads at a time when I really needed to have a good and fabulous career. I went to the school on 60th Street in 1969.

I did exceptionally well in class and it was the beginning of my life in Computers!!

Since there is a Facebook Page, I am going to look it up!!

Albert Merrill Technical Institute (as it was named when I attended) was my foot in the door to Data Processing (formerly the name of Information Technology). I graduated top in my class and landed my first job even before I officially graduated. I exceeded all expectations in that first job and realized that Data Processing (formerly the name of Information Technology) was the career for me. I spent the next 45 extremely successful years in Information Technology operations and comfortably retired in 2019. If it wasn’t for Albert Merrill Technical Institute’s cheesy commercials, who know what my life may have been. Thank you

I attended AMS at Columbus Circle in 1979/1980 during the subway strike. They shut down for a month until the strike was settled. Only good memories from the school, with a great teacher Mr. Brown who also had a twin brother teaching there. Classmates were diverse and awesome. I traveled by train and subway from Central NJ, and made great friends during my travels. AMS helped get me my first Computer Programming job at an actuarial firm and I had a 36 yr long career in IT culminating at a multi billion dollar Pharmaceutical firm. Never regretted going to AMS, it worked for me.

I attended the Albert Merrill School in late 1979. I earned my 6 month certificate in June 1980. My first interview landed me my first job. Like everything else in life, “What you put in, is what you get out”. The school taught you Data Processing concepts, and you were meant to use what you learned to get a position and build on it. I am not sorry I went to this school. This school afforded me the same type of opportunity that any other school would have given me. I was able to turn that first job into an almost 40 year career.

Hi guys , I need some help , I graduate in June 27 , 1989 from Albert Merrill and I need to get a transcript . I living in Puerto Rico right now and I don’t have a idea how to get it or any place to call . I trying to find a website but nothing yet . If anyone you can find me in Facebook . Obdulio Reyes , National Guard / State Command . of Puerto Rico. Or my phone number cell 939-414-5308.
Thanks you