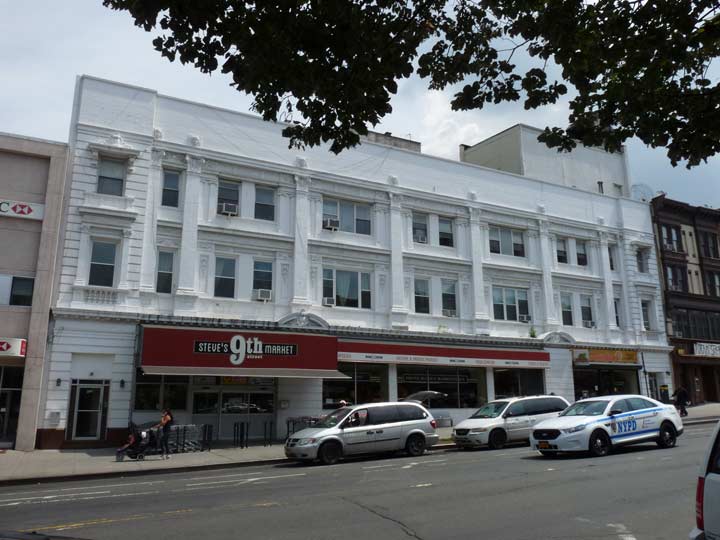 Trained eyes can pick out former theater buildings pretty readily. This is the former RKO Prospect Theatre, which was home to vaudeville shows and then films from 1914 until 1967. It has housed a number of supermarkets in recent years. The rear end is now condominiums.

Constructed on the site of a former synagogue and three apartment houses, the Prospect attracted the biggest stars of its day, including The Marx Brothers, Burns and Allen, Fanny Brice, and Bert Lahr. Ted Healy began an act here in 1925 that involved three hecklers who would interrupt his act and fight with him and with each other. Though Healy went on to some theatrical and motion picture success, the brothers, who included Moses and Jerome Horwitz of Bath Beach, went on to become the Three Stooges under their stage names, Moe, Curly and Shemp Howard and Larry Fine. The Horwitz brothers had been building contractors in Bath Beach, but few of the homes they built survive today.

In 1970 the lobby, and orchestra sections were gutted and converted into a supermarket. Gary Rosen and Jacob Bouganim, two Brooklyn developers, bought the 16,000-square-foot stage area as well as the lot beneath it for $500,000 in 1986. They converted it into 15 condominiums. They were interested in the building because it’s much high than most of the buildings in the neighborhood, and has unobstructed views of Manhattan. The balcony is all that remains of the original Prospect Theatre. –After the Final Curtain

I remember seeing the Dave Clark 5 visit the theater back in the 60’s. The RKO was showing their movie Having a Wild Weekend or Catch us if you can. (don’t remember which one). Thousands of screaming girls. As they entered the Theater, the rush from the screaming girls could not be held back and we all ran through the theater.

The Theater was located in 9th Street between 5th & 6th Avenues. I lived around the corner.

The name of the film you saw was “Having A Wild Weekend.” The song “Catch Us If You Can” was from the sound track.
I remember seeing that flick with my father in a theater on Flatbush Ave. Not impressed by the flick, my dad and I walked out midway.

The RKO and Loew’s Chains were the 1st run neighborhood theaters…..after Manhattan and Downtown Brooklyn……I remember taking Dates there…..

My grandfather owned Murphys bar on 12th street and 5th Avenue in the 40s and 50s. The family lived on 6th Avenue.

Ah, what memories I have from going to the movies in the 1950’s and early 1960’s. Besides the Prospect, I would go to the Avon below 5th avenue on 9th street, the Globe just above 5th avenue on 15th street, the Paradise on 4th avenue and 28th street. There was also a movie theater at 16th street just below 5th avenue but it was closed sometime in the late 40’s or very early 50’s. Also there was the Sanders on Prospect Park southwest and 15th street. Does anyone remember the ice cream shop on 5th avenue between 15th and 16th street. It was called Lorry’s or Laurie’s, I’m not sure of the spelling. You can’t physically go back in time but, with this site you can go back even if it only in your mind. Thanks for bringing back the memories Kevin and keep up the great work.