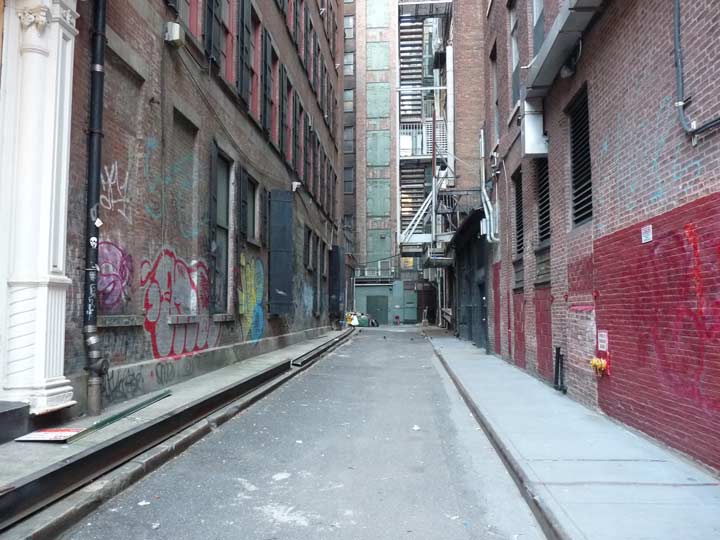 According to Gil Tauber of oldstreets, in 1806 a laneway called at first Cross Lane was laid out beginning at Bleecker opposite Mott. It ran north to the middle of the block, then west to a point about 150 feet east of Broadway, then north again, crossing Bond and Great Jones Street to a dead end about 45 feet south of East 4th Street. Lafayette Street (laid out in the first decade of the 20th Century) later cut the alley into two L-shaped sections.

East of Lafayette, the alley became unofficially known as Shinbone Alley and the Department of Transportation has marked it on two occasions; both times, the signs were stolen, and today, Shinbone Alley is fenced off at both ends, on Lafayette and on Bleecker.

Jones Alley, as the road is known west of Lafayette Street, is also fenced off as private property. I do not know which properties have claimed it. Both the alley and Great Jones Street are named for Samuel Jones, a prominent lawyer popularly known as the “Father Of The New York Bar” in the late 1700s. Jones also served as New York City’s first comptroller. Because there was already a Jones Street in Greenwich Village, Great Jones Street, which is rather wide, gained the adjective “great” meaning “large.”

About a decade ago, Pat Cullinan, Jr. was able to gain access and shot a series of photos that went on this FNY page, which goes into more depth about Jones and Shinbone Alleys and Great Jones Street.

Im trying to figure out how private interests go about taking over what is city property.
Is it like Squatter’s Rights”,where you just take what you want cuz you’ve been
there long enough to claim it?

My same question as Chris above: When private concerns “take” formerly public property,are they at least assessed additional tax on the additional square footage value, and do they compensate the city for the “taking”?