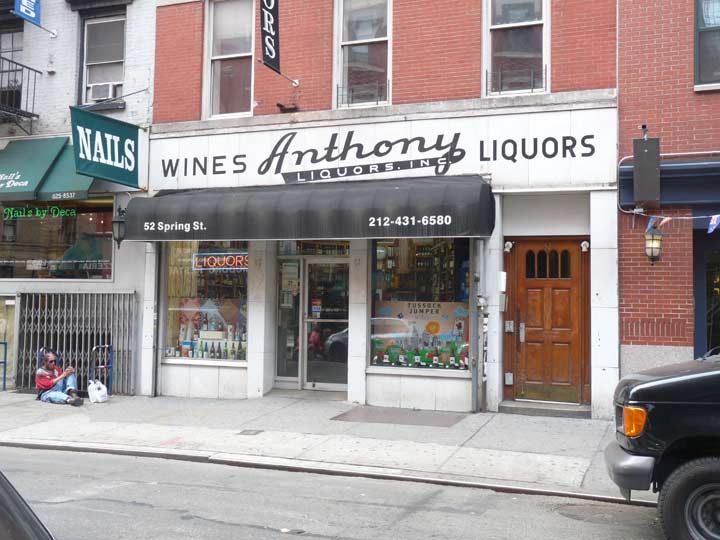 I did a presentation on Monday, March 7, 2016 in Astoria about Travis, Staten Island, a place formerly known as Linoleumville, where between 1873 and 1931 there was a large factory the produced the titular product. Linoleum is a floor covering produced mainly with pulverized or ground cork and oxidized linseed oil. The process was perfected by Englishman Philip Walton, who supervised Staten Island’s Linoleumville along with founder Joseph Wild in the early days. Walton was succeeded by David Melvin, a Scottish-born inventor and engineer who developed several new varieties of linoleum products including colored linoleum and “battleship” linoleum, originally used by the US Navy but later installed in office buildings and department stores.

In the golden age of New York City store signs in the 1940s, some of them appear to have been made using linoleum panels such as this one at 52 Spring Street just off Mulberry. If you’ve been reading FNY long enough you know that many, many liquor stores around town have retained their old neon and vinyl signage — because it gets the job done. Why replace them? This one is simplicity itself with black on white script. The use of the word “liquors” twice is a little redundant but drives the point home and the extra long swash on the “y” is a nice touch.

Looks like one of the stores many customers is waiting for the place to open!!!!!!!!or owns the store with the gate?????

Here is a photo of the old sign..
You can see it just right above the ‘bar’.