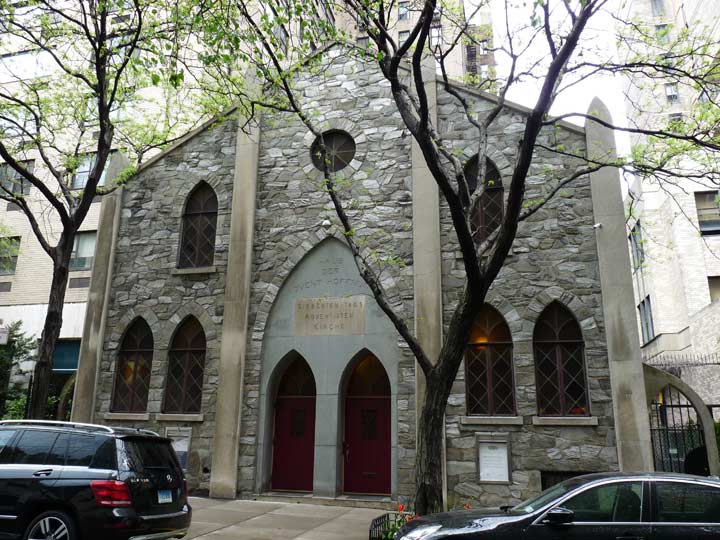 I was hustling west on East 87th Street a couple of years ago on a day that couldn’t figure out whether to sun or rain when I spotted this neat little structure tucked away between high rise apartment buildings at #111, just east of Park. It is a remnant of German Seventh-Day Adventism in German America’s former stronghold in Yorkville, with its cornerstone laid in 1956. It was probably surrounded by walkup tenements when built. 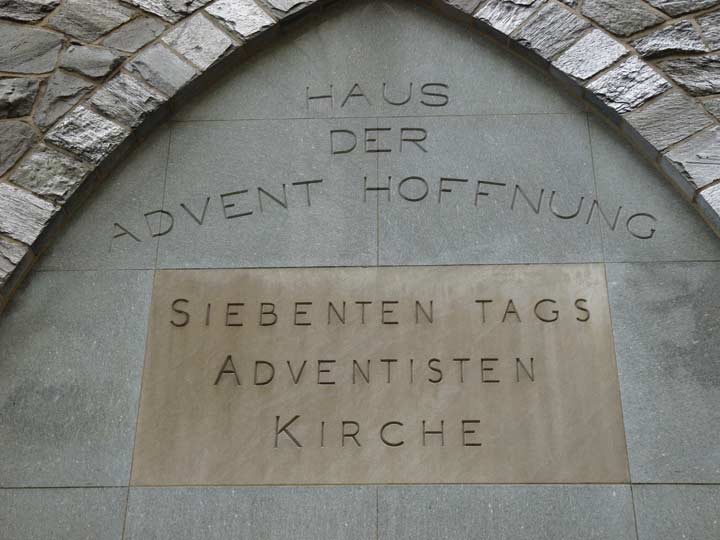 German for “House of Advent Hope” and “7th-Day Adventist Church” appear over the entrance.

Yorkville did not start out as a German neighborhood; from colonial times, it was a small settlement on the Upper East Side clustered along the now-disappeared Boston Post Road as it meandered north.

Beginning around 1930 German as well as eastern European and Irish immigrants began moving to the East 80s. There were greater opportunities to find work as well as new apartment buildings began to appear at the time, and there was plenty of mas transportation. Bear in mind that NYC had many trolley car lines and both the 2nd and 3rd Avenue Els were in business until 1940 and 1955 respectively. But the neighborhoods around the els began to dilapidate and age, and calls rang out to eliminate the els and let the sunshine in.

Social clubs and religious and educational institutions sprang up in Yorkville, creating and maintaining a network where German traditions were practiced and celebrated. Similarly, German restaurants, stores, beer halls, bookstores, and music venues guaranteed that German residents felt right at home and outsiders and visitors felt immersed in German culture. Eighty-sixth Street was considered German Broadway where one could purchase, consume, and enjoy all things German. —FNY’s Yorkville page

Beautiful find, but 10 years from now it will be knocked down for a condo.

How do you know that?

No I don’t think the church will torn down for new buildings.

We all ways see the church from the out side . My Grand Parents lived across the street at 110 E. 87th St.