Two streets with the same name come together in southern Hoboken, Hudson Place and Hudson Street. The Place is the first street most visitors see when the emerge from the PATH train, an east-west street still punctuated by, in their turns, trolley tracks left over from a few generations previous, and by a stretch of Belgian-blocked pavement between the huge Erie-Lackawanna railroad-ferry terminal and River Street. Hudson Place bustles with commuters trying to get to Manhattan in the morning and back home at night; in the spring of 2016, toiling at a temp job, your webmaster was salmoning against the stream trying to get into Hoboken in the morning when most people are getting out. In the evening, the reverse happened but upon attaining Manhattan, I joined the commuting crowd on my way from Penn Station to Little Neck.

All this sounds very expensive, and it was.

Hudson Street, meanwhile, runs north and south; further uptown, it hosts what extravagant semi-mansions are left over from the robber baron period. (Some of these have been converted into frat houses associated with Stevens Tech, but I’ll feature those in a future segment). Today, I’ll show a couple of interesting items at the intersection of Hudson and Hudson… 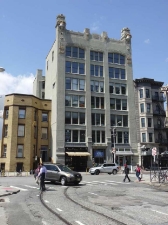 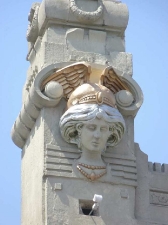 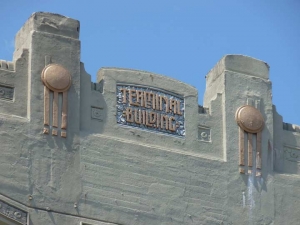 An unrecorded architect designed the streamlined Terminal Building in 1911; its sleek look somewhat telegraphs the upcoming Art Moderne era. Although the building was tenanted mostly by lawyers in its heyday, there had been a rathskeller in the basement in its early days. The building is mostly occupied by various business and physical therapy offices, but there is a bar and a sandwich joint on the ground floor.

Probably the building’s most distinctive feature is the pair of terra cotta heads on the roofline. At first I thought these re[presented Mercury, the Roman messenger god; the Lackawanna terminal represented rapid transit on the iron horse. Instead, these are representations of the Egyptian goddess of music, dance, foreign lands and fertility, Hathor, according to Randall Gabrielan, author of Hoboken: History & Architecture at a Glance. 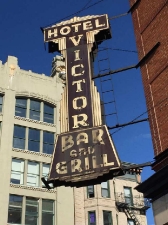 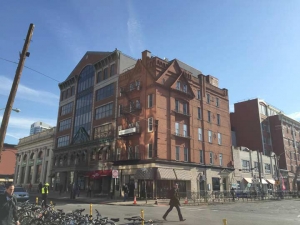 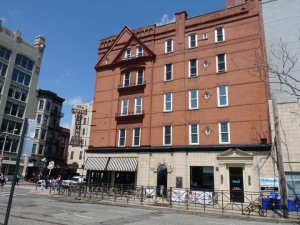 Victor/Victoria. The Queen Anne brick building on the NW corner of Hudson and Hudson guards its secrets. It was constructed as the Hotel Victoria in the 1890s, became the Hotel Victor along the way, and then stopped being a hotel altogether. Its oblong corner sign, which looks at least 75 years old, has held up well over the years and a ground floor bar, the “Hotel Victor,” has adopted the old name. 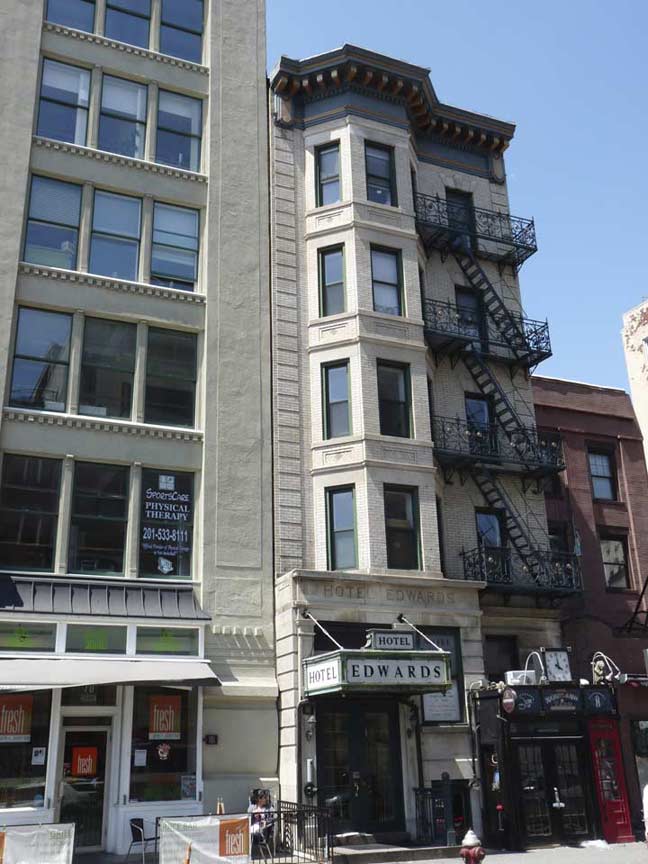 If the Hotel Victor(ia) was unaffordable, there was the Hotel Edwards across the street. It’s a residential building now, but it has retained its glass-etched overhanging marquee above the front entrance, with lettering in the Perpetua font along with some verdigris for character. The Scotland Yard pub, with a red box telephone for decor, is on the ground floor. 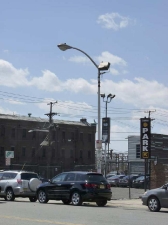 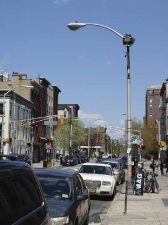 Municipalities outside NYC are not quite as fanatical about replacing ancient lighting fixtures. You can find a pair of General Electric M400s from the early 1960s on both sides of Hudson Street, and more are scattered around town. 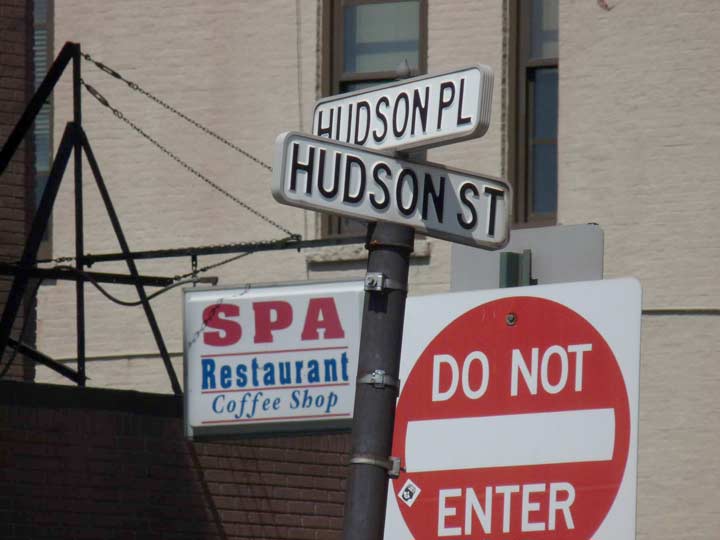 Also seen in Hoboken are several enamel and metal signs with raised letters in Highway Gothic on their original iron posts. Why replace them? They get the job done. NYC got rid of most of its similar signs in 1964(!).

Those hotels remind me of a story my dad, who grew up in Binghamton NY, would tell: A B’ton neighborhood character had spent his entire life there, and when he retired his friends insisted he take the Phoebe Snow to NYC, just so he could say he’d been there once. Somehow they never made it clear to him that the train stopped in Hoboken and that you had to continue by ferry to the city, and he didn’t pick up on that during his journey down. So he got off at the Hoboken terminal and crossed Hudson Place and took a room in one of those hotels and stayed there for a few days, leaving his room only to eat meals at a nearby bar. When he got back to B’ton his pals eagerly pressed him for details, but he kept saying “I don’t know what the big deal is about that town. It looks just like State Street here.” It finally dawned on them what he had done, or not done.