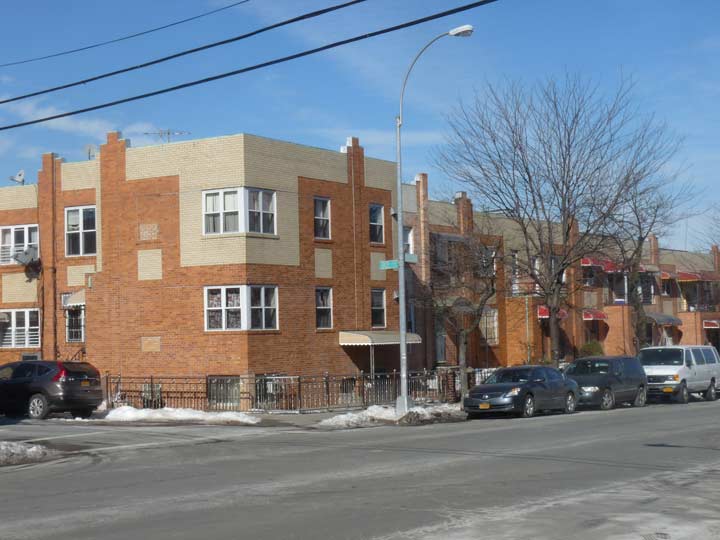 The streets of Long Island City, Ridgewood and to a lesser degree, Woodside, are lined with blond bricked Matthews Model Flats, each unit produced for $8000, beginning in 1915 by Gustave X. Mathews, who is virtually unknown today but responsible for much classic residential architecture in Queens. The distinctive yellow bricks were produced in the kilns of Balthazar Kreischer’s brick works in the far reaches of Staten Island. (The Kriescher and Long Island City stalwarts, the Steinways, were linked by marriage.) These were the final Mathews Flats built in NYC, executed by architect Louis Allmendinger, and reflect a streamlined Moderne design.

These handsome Mathews Model Flats, many with front gardens meticulously maintained by their owners, can be found in a triangle defined by Grand and Calamus Avenues and 79th Street, which include Ankener Avenue and Elks Road, named for the nearby Elks hall on Queens Boulevard. They opened in 1933 near the then-new Grand Avenue IND subway stop.

I was born in Elmhurst in 1946 and lived on Ankener Avenue the first eight months of my life before we moved up to 60th street near Metropolitan Avenue in Maspeth where I lived for the next 20 years. Obviously I have no memories of the place. They looked like nice apartments.

These houses are in Elmhurst, not Maspeth.

The do stand out nicely on a bright, sunny day under a blue sky. More reading here: https://www.brownstoner.com/history/queenswalk-mathews-company-row-houses/

My grandfather, Charles Softy, was the general contractor who built these houses. Charles was a Pratt grad and ran Softy Construction Co with his brothers. My parents moved into a house on Ankener Ave when it was completed. I grew up in that building, went to PS 102, JHS 73, Newtown Tech HS. Wonderful little neighborhood.